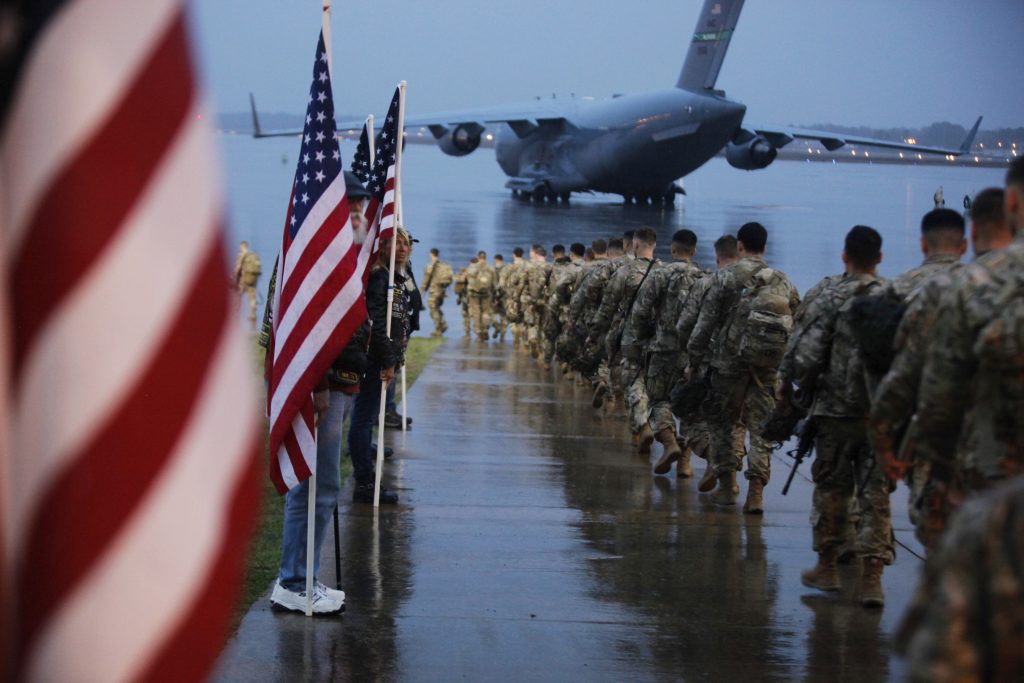 Hundreds of U.S. soldiers deployed Saturday from Fort Bragg, North Carolina, to Kuwait to serve as reinforcements in the Middle East amid rising tensions following the U.S. killing of a top Iranian general.

Lt. Col. Mike Burns, a spokesman for the 82nd Airborne Division, told The Associated Press 3,500 members of the division’s quick-deployment brigade, known officially as its Immediate Response Force, will have deployed within a few days. The most recent group of service members to deploy will join about 700 who left earlier in the week, Burns said.

A loading ramp at Fort Bragg was filled Saturday morning with combat gear and restless soldiers. Some tried to grab a last-minute nap on wooden benches. Reporters saw others filing onto buses.

The additional troop deployments reflect concerns about potential Iranian retaliatory action in the volatile aftermath of Friday’s drone strike that killed Gen. Qassem Soleimani, the head of Iran’s elite Quds Force who has been blamed for attacks on U.S. troops and American allies going back decades.

President Donald Trump ordered the airstrike near Baghdad’s international airport. Iran has vowed retribution, raising fears of an all-out war, but it’s unclear how or when a response might come.

Reporters weren’t able to interview the soldiers leaving Fort Bragg on Saturday, but an airman loading one of the cargo planes told an Army cameraman he was making January 1st plans when he got a call to help load up the soldiers, according to video footage released by the military.

“We’re responsible for loading the cargo. Almost our whole squadron got alerted. Like a bunch of planes are coming over here,” the unnamed airman said. “I was getting ready to go out for [January 1st] when they called me.”

In the gray early morning light Saturday, Army video showed soldiers dressed in camouflage fatigues filing into planes, carrying rucksacks and rifles. Humvees were rolled onto another cargo plane and chained in place for the flight to the Middle East.

Burns said the soldiers within the Immediate Response Force train constantly to be ready to respond quickly to crises abroad. When called by their superiors, they have two hours to get to base with their gear and must maintain a state of readiness so that they can be in the air headed to their next location within 18 hours.

He said that soldiers typically keep individual “go-bags” of their personal gear with them at their living quarters.

The wife of a member of the 82nd Airborne who deployed earlier this week said his departure was so abrupt she didn’t have the chance to say goodbye in person or by phone.

April Shumard said she was at work on Dec. 31st and he was watching their five children when he texted her that he had to rush to base. He wasn’t sure if it was a drill or a deployment. She said her husband has been in the military since 2010 and has already deployed twice to Afghanistan. But with those prior deployments, the family had much more time to prepare and say goodbye. This time, she got a second message confirming he was leaving, and he departed in a plane on the afternoon of New Year’s Day.

“The kids kept going, ‘When’s Dad going to be home?'” said Shumard, 42. “It’s literally thrown me for a loop. And him as well. He’s still in disbelief of where he’s gone. Our heads are spun.”

She said that Fayetteville is a tight-knit community, and she expects people to work together to support families who are suddenly missing a parent.

“This was so last-minute,” she said, urging people to reach out to 82nd Airborne families. “Just try to help out whoever you know who might need some babysitting or help or just get some groceries and bring it to their house.”

Similarly, Bri’anna Ferry’s husband got the call on Dec. 31st, and she said he was on a plane to the Middle East within hours. She fears he could miss milestones with their young daughter but also wants him to focus on his mission.