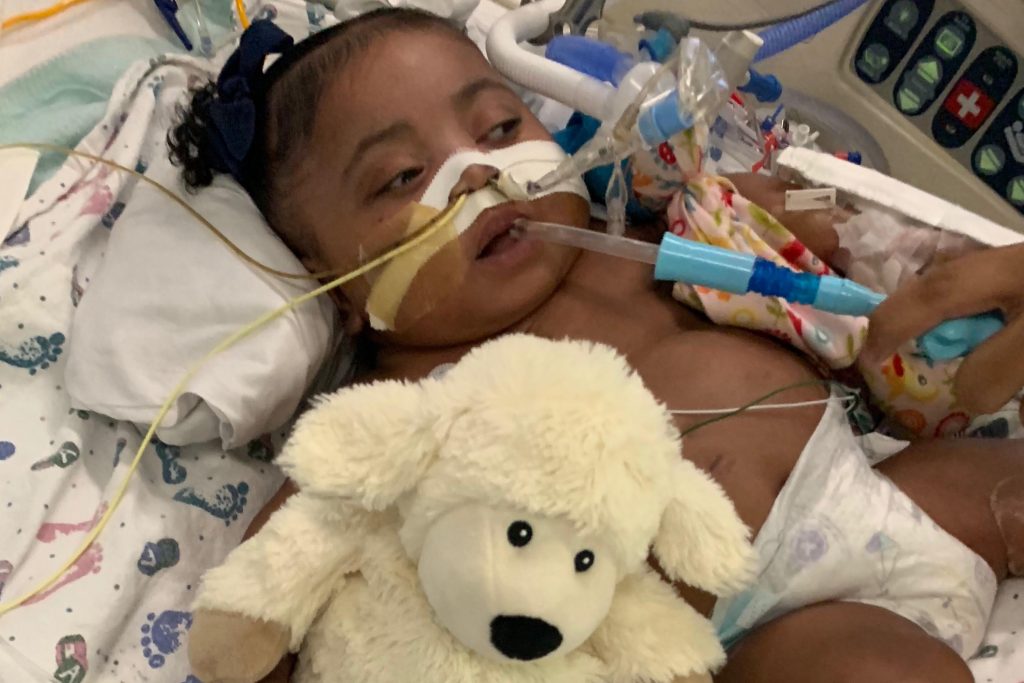 A Texas judge on Thursday sided with a hospital that plans to remove an 11-month-old girl from life support after her mother disagreed with the decision by doctors who say the infant is in pain and that her condition will never improve.

Doctors at the Fort Worth hospital had planned to remove Tinslee from life support Nov. 10 after invoking Texas’ “10-day rule,” which can be employed when a family disagrees with doctors who say life-sustaining treatment should be stopped. The law stipulates that if the hospital’s ethics committee agrees with doctors, treatment can be withdrawn after 10 days if a new provider can’t be found to take the patient.

In a statement issued by Texas Right to Life, which opposes the “10-day rule,” Lewis said she was “heartbroken” over the judge’s decision. “I feel frustrated because anyone in that courtroom would want more time just like I do if Tinslee were their baby,” she said.

The hospital said in a statement Thursday that in order to keep Tinslee alive, she’s on a constant stream of painkillers, sedatives and paralytics. She currently has severe sepsis, which isn’t uncommon when patients require deep sedation and chemical paralysis, it said.

“Even with the most extraordinary measures the medical team is taking, Tinslee continues to suffer,” the hospital said.

Prior to Thursday’s ruling, both sides agreed that if Marion denied the injunction request, the hospital would wait at least seven days before taking Tinslee off life support. In her decision, Marion said the seven-day period would give the girl’s mother time to file a notice of appeal and a motion for emergency relief with a state court of appeals.

Tinslee has been at Cook Children’s since her premature birth. The hospital said she has a rare heart defect and suffers from chronic lung disease and severe chronic high blood pressure. She hasn’t come off a ventilator since going into respiratory arrest in early July and requires full respiratory and cardiac support.

Lewis testified at a hearing last month that despite her daughter’s sedation, she has a sense of the girl’s likes and dislikes, describing her as “sassy.” She said Tinslee likes getting her nails done but doesn’t like having her hair brushed.

“I want to be the one to make the decision for her,” Lewis said about removing her daughter from life support.

At the hearing last month, Dr. Jay Duncan, one of Tinslee’s physicians, described the girl’s complex conditions and Cook Children’s efforts to treat her, which have included about seven surgeries. The cardiac intensive care doctor said that for the first five months of Tinslee’s life, doctors had hope she might one day at least be able to go home.

But Duncan said there came a point when doctors determined they had run out of surgical and clinical options, and that treatment was no longer benefiting Tinslee. Duncan said last month that the girl would likely die within half a year and noted the hospital has made “extraordinary” efforts to find another facility for her.

Duncan said there had been “many, many” conversations with Tinslee’s family about her dire condition.

Tarrant County Juvenile Court Judge Alex Kim issued a temporary restraining order to stop the removal of life support on Nov. 10. But Kim was removed from the case after the hospital filed a motion questioning his impartiality and saying he had bypassed case-assignment rules to designate himself as the presiding judge.

After his removal, Judge Marion, who is chief justice of Texas’ Fourth Court of Appeals, was assigned to hear the request for an injunction in Tarrant County district court.

The case has become a rallying point for Republicans in Texas, with the attorney general stating his opposition to the “10-day rule” and GOP state Rep. Tan Parker saying it “doesn’t fit with Texas values.”

The 1999 law that shields from lawsuits doctors who follow the process of going through an ethics committee was crafted by a task force that included lawmakers, attorneys, doctors and political groups. Supporters of the law passed when George W. Bush, a Republican, was governor include the Texas Alliance for Life, the Texas Catholic Conference of Bishops and the Texas Medical Association.

Supporters say the law provides a framework for doctors and hospitals to resolve differences and ensures that doctors can’t be forced to perform medical interventions that cause harm or suffering.