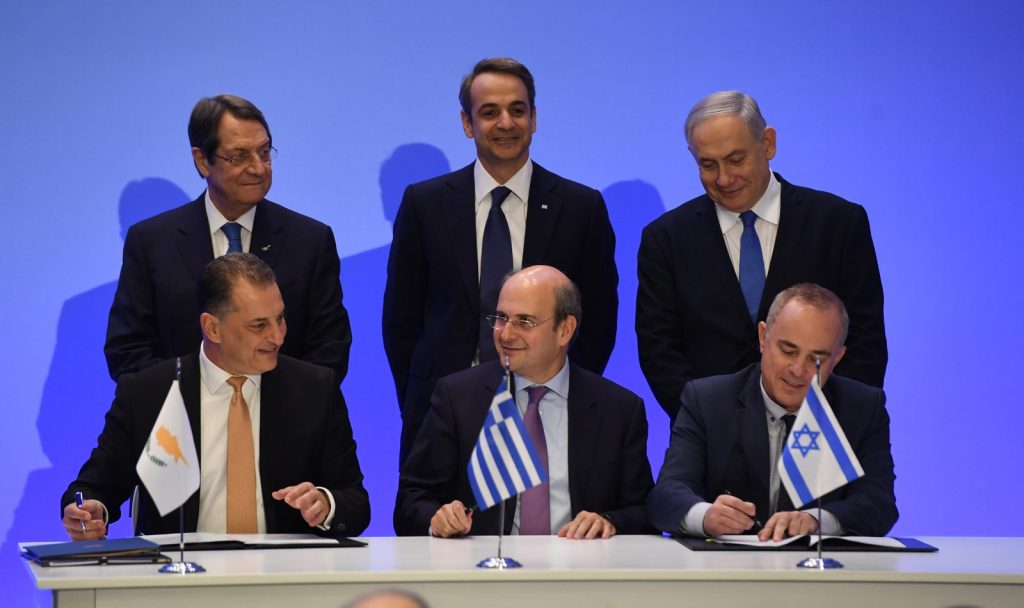 For years it was a plan, a project, a dream; on Thursday it became a reality with potential to change the region in major ways.

Israel joined Greece and Cyprus in finalizing the agreement to build the EastMed natural gas pipeline, a 1,200-mile underwater link carrying between nine and 12 billion cubic meters of gas a year from offshore reserves held by Israel and Cyprus to Greece, and then on to Italy and other southeastern European countries.

Prime Minister Netanyahu declared: “This is a historic day for Israel, because Israel is rapidly becoming an energy superpower, a country that exports energy.

“Just days ago, we opened the Leviathan gas field, and it is producing enormous yields. But with the exportation that will become possible via this pipeline, we will be able to provide hundreds of billions of shekels in revenue to the citizens of Israel—for their welfare, for health, for the young people and the elderly, for everyone. This is an extraordinary development.

“I would also like to mention that we signed a supply agreement with our Arab neighbors. This strengthens the peace, the economy and the future.

This is also a historic day because the cooperation between Greece, Cyprus and Israel is growing stronger. This is a true alliance in the Eastern Mediterranean that is economic and political, and it adds to the security and stability of the region. Again, not against anyone, but rather for the values and to the benefit of our citizens.

Turkey, which has conflicting claims to the maritime area, was noticeably omitted from the list. Turkish President Recep Tayyip Erdogan said in November he envisaged joint energy exploration activities with Libya in the eastern Mediterranean.

“No matter who is involved, no plan in the region that excludes Turkey has any chance of success,” Oktay told the Anadolu state news agency.

Mitsotakis said the pipeline was of “geostrategic importance” and would contribute to regional peace.

Anastasiades said his aim was “cooperation and not rivalry in the Middle East.”