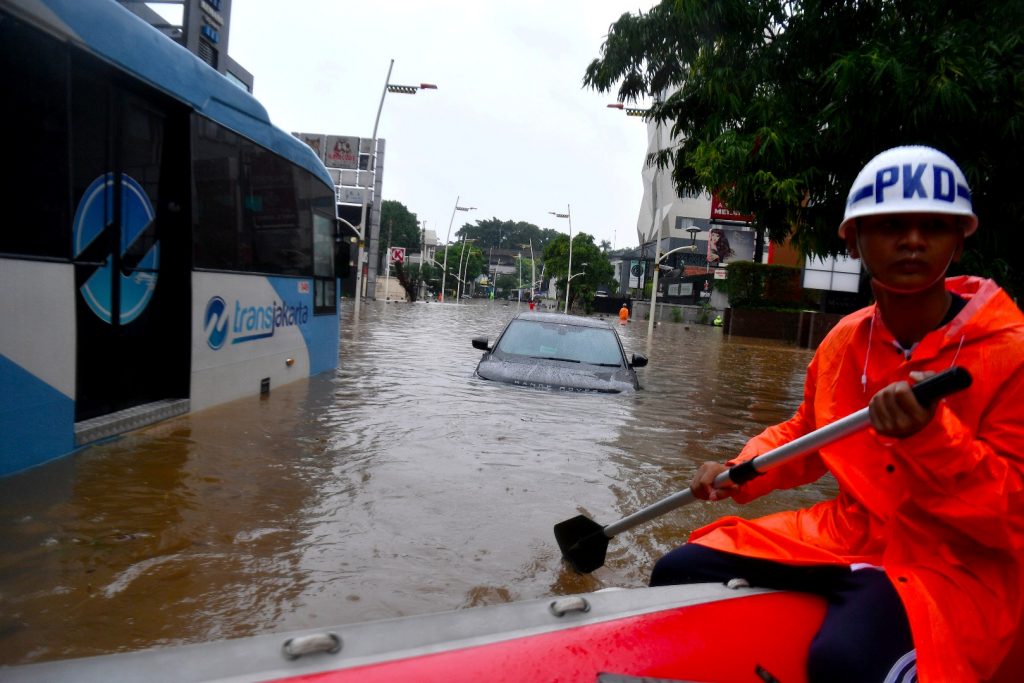 Tens of thousands of people were evacuated in Indonesia’s capital Jakarta on Thursday after flash floods and landslides killed up to 26 people amid some of the heaviest rain in more than 20 years, with more deluges forecast, authorities said.
The flooding, among the deadliest in years, caused chaos in parts of Southeast Asia’s biggest city with train lines blocked and power outages in some areas. Swathes of Jakarta and nearby towns were inundated after heavy rain fell on Dec. 31 and on into the early hours of Jan. 1.

Social Affairs Ministry data showed 26 people were killed in the flooding, up from the earlier toll of 21.

As of Thursday morning over 62,000 people were evacuated in Jakarta alone, disaster mitigation agency spokesman Agus Wibowo said, although later in the day he told a media source that the number of evacuees were down to around 35,000 people.

Rainfall at an airport in East Jakarta measured 377 mm (15 inches) early on Jan. 1, the highest daily reading during major floods since at least 1996, according to the Meteorology, Climatology and Geophysics Agency (BMKG).

Jakarta and its surroundings are home to more than 30 million people. More than 50 people died in one of the capital’s deadliest floods in 2007 and five years ago much of the center of the city was inundated after canals overflowed.

The government announced last year that it is relocating the capital to East Kalimantan Province on Borneo, though the Planning Ministry pledged that the government will invest $40 billion in modernizing Jakarta.

National Disaster Mitigation Agency spokesman Agus Wibowo said Wednesday that monsoon rains and rising rivers submerged at least 90 neighborhoods and triggered a landslide in Depok, a city on the outskirts of Jakarta.

Wibowo said the dead included a 16-year-old high school student who was electrocuted, while more than 19,000 people were in temporary shelters after floodwaters reached up to 3 meters (10 feet) in several places.

Jakarta Gov. Anies Baswedan told reporters after conducting an aerial survey over the flooded city that as much as 370 mm (14.5 inches) of rainfall — more than three times the average amount — was recorded in Jakarta and West Java’s hilly areas, resulting in the Ciliwung and Cisadane Rivers overflowing.

He said that about 120,000 rescuers had been deployed to evacuate those affected and install mobile water pumps as more downpours were forecast in the coming days. Authorities warned flooding was possible until April, when the rainy season ends.