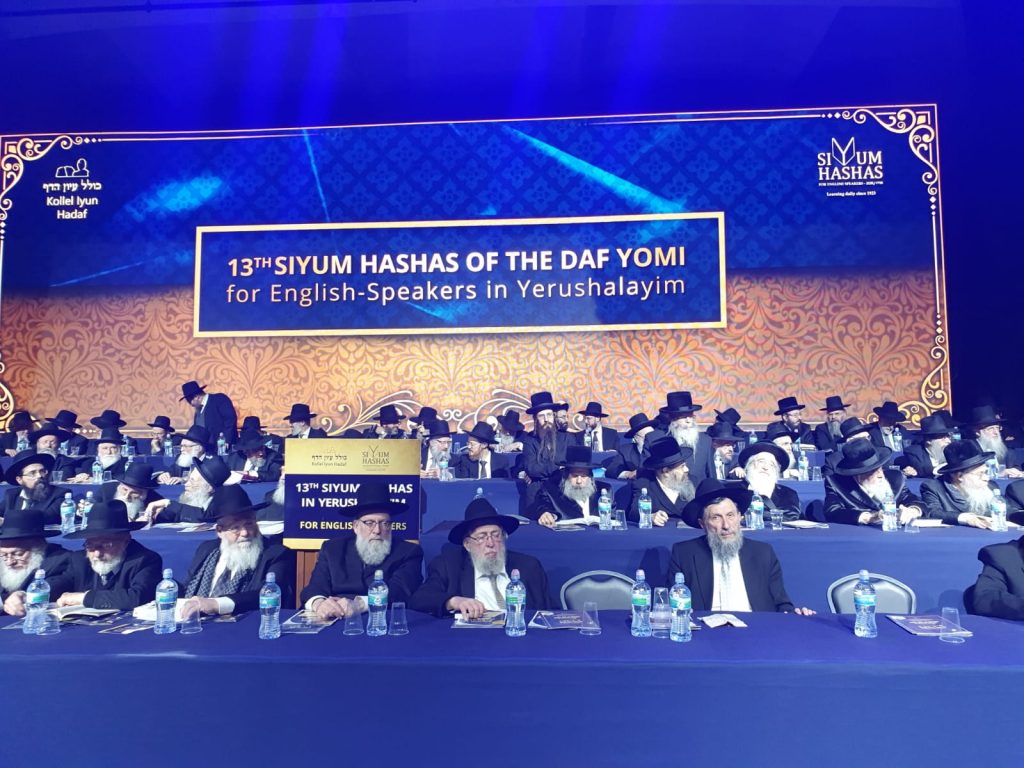 Close to 8,000 Yidden, spanning the entire spectrum of English-speaking olim in Israel, filled all four of Jerusalem’s Binyanei Ha’umah halls to capacity at the English-speaking Siyum HaShas on Wednesday night.

The siyum was held at the same time as a Siyum HaShas was being held in the MetLife Stadium in New Jersey, attended by over 80,000 people. Live streaming enabled participants – for the first time in the history of celebrations of the Siyum HaShas – to actually dance together from across the globe, each seeing the other on wide screens.

“This was the third such siyum for the English-speaking public here in Eretz Yisrael,” said Gideon Katz of IMP Group, which coordinated with Kollel Iyun Hadaf to produce the event. “The live streaming was possible because it’s the winter, and the event at MetLife, an open-air stadium, was done in the afternoon and not at night, when it would be much colder. This enabled people to see each other – many relatives scanned the screen and indeed found their relatives celebrating with them on the other side of the globe. This was a precedent in Daf Yomi history.”

Divrei brachah were heard from Harav Gedalya Rabinowitz, the Manistritcher Rebbe, honorary chairman of Kollel Iyun Hadaf; and Harav Yitzchak Scheiner, Rosh Yeshivas Kamenitz, who came with mesirus nefesh to give chizuk to all. Tehillim were recited by Harav Moshe Mordechai Eichenstein, the Trisker Rebbe.

Harav Yitzchak Berkovitz, Rosh Kollel of the Jerusalem Kollel addressed the event, followed by a video presentation and then the actual completion of the Shas, introduced by Harav Dov Zupnik.

Next Harav Yehoshua Eichenstein, Rosh Yeshivas Yad Aharon, began the learning of the first page of the first masechta of Talmud.