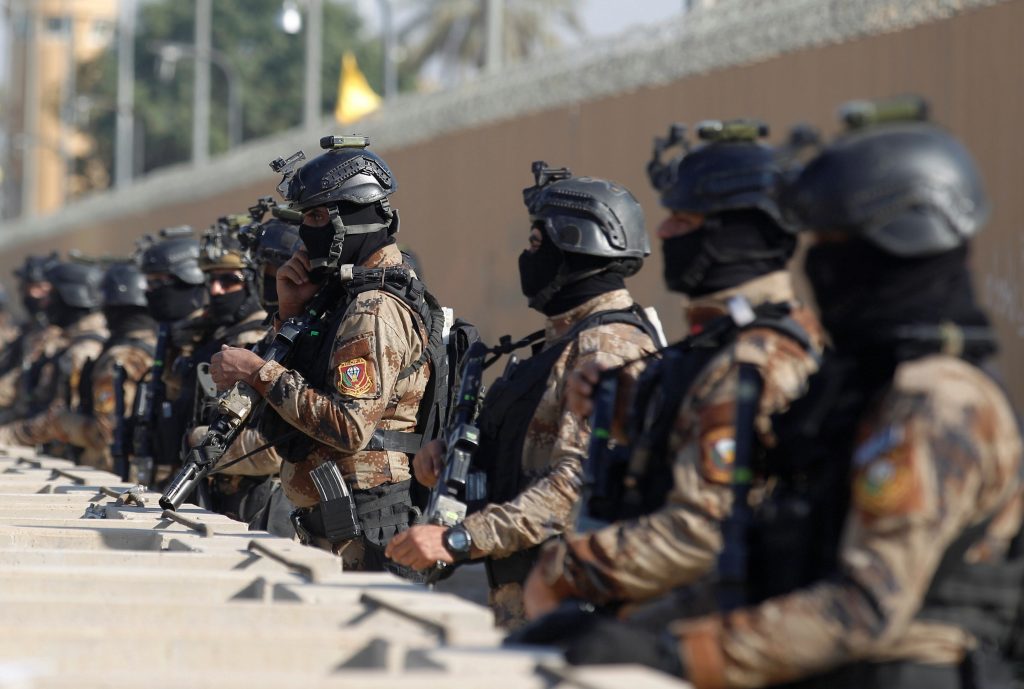 U.S. troops fired tear gas on Wednesday as hundreds of Iran-backed militiamen and other protesters gathered outside the American Embassy in Baghdad for a second day and set fire to the roof of a reception area inside the compound.

Dozens of Iran-allied militiamen and their supporters had camped out at the gates of the embassy overnight, a day after they broke into the compound, trashing a reception area, smashing windows and spraying graffiti before pulling back.

The U.S. Marines guarding the embassy fired tear gas Wednesday as more crowds arrived and after the protesters lit a fire on the roof of the reception area. Smoke rose from the building. There have been no reports of any injuries since the protests began.

Later, Iraqi soldiers, federal police and elite counterterrorism forces deployed along the fence between the protesters and the compound. There was no friction between the security forces and the demonstrators.

The Popular Mobilization Forces, an umbrella group of state-allied militias, issued a statement calling on its supporters to withdraw from the compound in response to an appeal by the Iraqi government, saying “your message has been received.”

The militiamen were protesting deadly U.S. airstrikes that targeted Kataeb Hezbollah on Sunday, killing 25 fighters. Those strikes were in response to a rocket attack on an Iraqi army base that killed a U.S. contractor last week. The militia is separate from the Hezbollah militant group in Lebanon, though both are backed by Iran.

The violence comes as Iran and its allies across the region have faced unprecedented mass protests in recent months and after heavy U.S. sanctions on Iran that have cratered its economy.

Iraq has seen massive anti-government protests since October fueled by anger at widespread corruption and economic mismanagement, as well as Iran’s heavy influence over the country’s affairs. Those protesters were not involved in the embassy attack.

The U.S. and Iran have vied for influence over Iraq since the 2003 U.S.-led invasion that toppled Saddam Hussein. Iran has close ties to Iraq’s Shiite majority and many of its major political factions, and its influence has steadily grown since then.

For weeks, the anti-government protesters have been trying to enter the Green Zone housing the government and the U.S. Embassy, but have been beaten back by security forces, who have killed hundreds of demonstrators.

The militiamen and their supporters, however, were able to quickly enter the Green Zone and mass in front of the embassy, with little if any resistance from authorities.

By Wednesday morning, they had set up a small sit-in of their own, with around 50 tents set up between two main gates about 500 meters (yards) apart. Demonstrators could be seen hurling rocks over the walls of the embassy compound, where U.S. troops responded by firing tear gas from the roofs of buildings. At one point, two armed security guards mounted a structure inside the embassy near the gate and the demonstrators began throwing stones toward them, forcing them to withdraw.