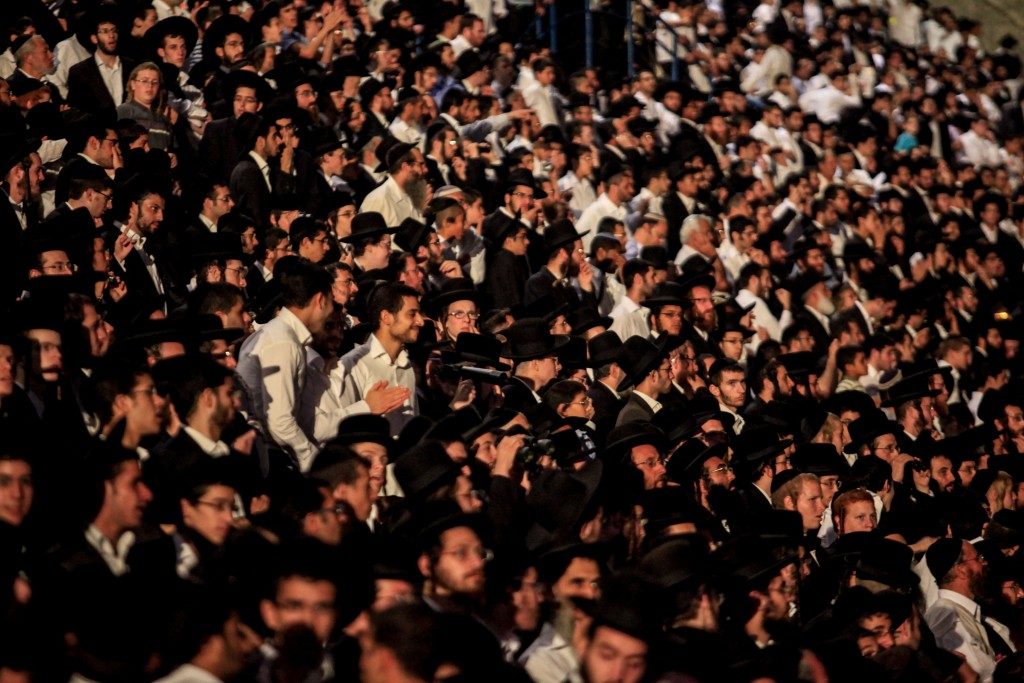 It was 14 years ago. Along with the rest of Klal Yisrael, I celebrated the Siyum HaShas of the Daf Hayomi program. Since I am a relative of Harav Meir Shapiro, zt”l, who created the institution of Daf Yomi, I was scheduled to appear at several events related to the Siyum, and in some I was among the speakers. (All that time, the image of my grandfather, Harav Moshe Chaim Lau, Hy”d, who was Rav Shapiro’s cousin, remained prominent in my mind’s eye. He had been a speaker at the Siyum HaShas that took place in 5698/1938 in the beis medrash of Yeshivas Chachmei Lublin, on the eve of the Holocaust.)

In Tel Aviv’s Ganei Hataarucha, about 4,000 people had assembled. These were “ordinary” working men from all over Eretz Yisrael who had studied through Shas under the sponsorship of the Me’oros Hadaf Hayomi organization. Giant screens set up in various places in the hall enabled the vast crowd to see the speakers. During the festive seudas mitzvah, scenes from the organization’s many Daf Hayomi groups were displayed, along with scenes from the daily lives of those participating in those shiurim.

One scene that was portrayed was a pickle stand in the open market of the Hatikva neighborhood in Tel Aviv. The proprietor — a man named Nissim, if I am not mistaken — had a curly head of hair and no yarmulke, but he attended a shiur in Daf Hayomi every day without fail. When the interviewer asked him how he felt about being part of the program, he answered in coarse Israeli slang, “Achlah — it’s really cool!” The thousands watching this at the siyum chuckled loudly at his response.

Sitting next to me on the dais was Harav Yaakov Edelstein, zt”l, one of Eretz Yisrael’s foremost Rabbanim. His reaction to this clip was quite different than that of the others — he had to take off his glasses so that he could wipe the tears from his eyes. Noticing my surprise, he told me, “Nissim the picklemonger finished Shas! These are tears of joy, not of sadness.”

This shows you the far-reaching insights of a real talmid chacham. Nissim’s expression of it being “achlah” was totally eclipsed by the fact that he had completed Shas.

Harav Meir Shapiro did not have an easy time accomplishing what he did. In fact, when he introduced the winning concept of the Daf Hayomi, many prominent Rabbanim opposed the idea. In our family, we know of one such Rav who remarked, “According to your plan, every ignoramus will be able to go around boasting that he finished Shas.” Such statements almost persuaded Rav Meir Shapiro to throw in the towel, but Harav Menachem Ziemba, Hy”d, came to his defense, declaring, “Well, anyone who learns Daf Hayomi and has learned through Shas is obviously no longer an ignoramus.”

Rav Shapiro had the backing of the generation’s greatest leaders, including the Chofetz Chaim and the Imrei Emes. They said that Heaven had reserved this wonderful innovation especially for him.

Rav Shapiro once wrote an article in which he related that he was once traveling on a train, sitting next to a young Jew who was a soldier in the Polish army. At one point, the soldier reached into his satchel and pulled out a small Gemara and began learning the day’s daf. The Rav asked him where he came from, and he said that his family lives in Radom.

“How did you come to Daf Hayomi?” the Rav asked.

“Look, I am a soldier,” the young man replied. “A soldier carries out the orders given to him.”

That’s the connection between the picklemonger in the Hatikva neighborhood and the Polish soldier — both of them were enlisted in Hashem’s army. Both of them finished Shas by following the Daf Hayomi program.

Rav Shapiro continued by relating that the Gemara (Pesachim 22) tells us that Shimon Ha’amsoni noted that the Torah uses the word es hundreds of times and developed a thesis that this word always comes to include something not written expressly in the passuk. He made it his business to figure out what the Torah meant to add each time the word is used, but then he reached the passuk of “Es Hashem Elokecha tira — You must fear Hashem” (Devarim 6:13). He reasoned that it is impossible that the Torah would tell us to have fear for any being other than Hashem. Therefore, he decided that his thesis was incorrect and he retracted all the interpretations he had formulated up to that point.

Shimon’s disciples were taken aback. How could he discard all the hard work he had invested in developing his thesis? Shimon appeased them, telling them that he would receive reward for making the retraction just as he was sure to receive reward for all his efforts making his drashos. And so, all his novel interpretations were set aside.

Then, Rabi Akiva revived the thesis by explaining that the word es in the passuk of es Hashem tira likewise comes to add — it teaches that we are to fear talmidei chachamim just as we fear Hashem.

Rav Shapiro asked, “Why didn’t Shimon Ha’amsoni, as great a scholar as he was, think of this solution himself? Surely, he understood how important it is to fear talmidei chachamim!

“But there are two pathways in serving Hashem. Some people invest all their efforts in self-improvement. They abstain from all the pleasures of this world and all its activities, and thereby they reach very high levels in avodas Hashem. Shimon Ha’amsoni was such a person. When he studied the passuk of ‘You must fear Hashem,’ he was so overwhelmed by his awe of the Creator that it was not possible for him to think of anything else.

“Rabi Akiva, on the other hand, focused his avodas Hashem on teaching Torah to others and influencing people to become closer to Hashem and His Torah. The people who were only somewhat connected to Torah were part of his world. Therefore, he was able to see that there is room to add to the passuk’s message. The word es comes l’rabbos talmidei chachamim — to add Torah scholars. Our job is to add to the ranks of those who fear Hashem, to see to it that there are more talmidei chachamim in our world.”

It is obvious that Harav Meir Shapiro epitomized this ideal throughout his career, and now he can see the fruits. He can take pleasure in watching tens of thousands of Jews who have learned Shas through the Daf Hayomi program that he instituted with his own ten fingers. And he will watch as these people raise their children and grandchildren to be G-d-fearing, Torah-loving Jews who will fill the world with knowledge of Hashem.