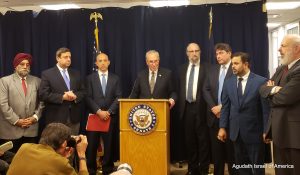 Senate Minority Leader Charles E. Schumer (D-N.Y.) is calling for a quadrupling in federal security funding to non-profit institutions, after attacks this week on a Chanukah celebration in Monsey, N.Y. and a church in Texas.

The federal Nonprofit Security Grant Program (NSGP) provides grants of up to $100,000 apiece to nonprofit institutions at risk of terror attacks, including houses of worship, hospitals, libraries and museums. The funding may be used for fencing, lighting, video surveillance, metal detectors, and blast-resistant doors, locks and windows, as well as to train staff and pay for contracted security personnel.

The recently passed federal spending bill allots $90 million to the program, up from $60 million the previous year. But at a press conference Monday with religious leaders at his New York office, Schumer called for the funding to be raised $360 million. 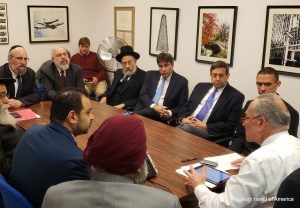 “With horrific hate crimes and terror attacks against places of worship and schools becoming more frequent, we must continue doing all we can to help protect people of all faiths worship and gather in safety and security,” said Schumer. “Federal security funds, like those provided through NSGP, are the cornerstone of effective preparedness and prevention against terror attacks … These dollars prevent tragedies and save lives, so while it is good news that as part of the federal budget deal we were able to secure an increase in these funds, we need to do it again because the state of the crisis demands it.”

On Motzoei Shabbos, a man with a machete burst into a Chanukah ceremony in Monsey, at the home of Harav Chaim Leibish Rottenberg, Kossoner Rebbe of Forshay, and stabbed five people, one of whom remains in critical condition. The following day, a gunman killed two people in a Texas church before being shot dead by church security. During the past several years, there have been multiple deadly shooting attacks on synagogues and churches across America, and an overall increase in anti-Semitic hate crimes.

At the press conference Monday, Nathan Diament, Executive Director for Public Policy at the Orthodox Union, noted that when the OU began advocating for increased security funding more than a decade ago, “We did so out of a sense of concern and an abundance of caution. But we did not envision the nightmare the Jewish community is living through today.”

“When enacted and disbursed,” said Diament, a member of the Department of Homeland Security’s Subcommittee for the Prevention of Targeted Violence Against Faith-Based Communities, “these funds will make people in our community more secure; these resources will save lives.”