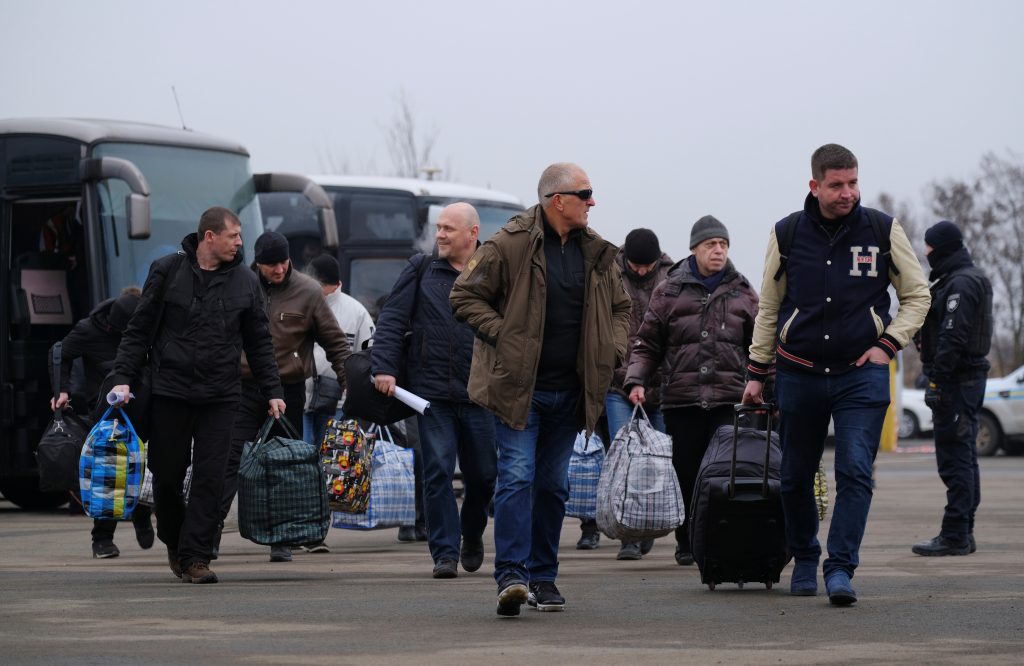 Ukrainian government forces and pro-Russian separatists in eastern Ukraine completed a full prisoner swap on Sunday after bussing remaining detainees in the five-year conflict to an exchange point in the breakaway Donbass region.

The exchange is likely to be hailed by Ukrainian President Volodymyr Zelenskiy as proof he is making good on a promise to bring captured Ukrainians home.

But some in Ukraine are unhappy that riot police accused of opening fire on protesters against the country’s Russia-friendly then-president Viktor Yanukovich in 2014 are among those who were handed over.

The office of Ukraine’s president said that 76 former pro-government detainees had returned home. “(They) are safe in Ukraine-controlled territory,” it said.

The swap, at a checkpoint near the industrial town of Horlivka in the Donetsk region, had initially been expected to see Ukraine hand over 87 separatists in exchange for 55 pro-government Ukrainians.

As the exchange began early in the morning, Ukrainian men and women dressed in civilian clothing got off a bus after being brought to the rendezvous point by separatist forces, and were then herded into a nearby tent.

Though the swap will help build confidence between the two sides who are wrangling over how to implement a 2014 peace deal, serious disagreements remain and full normalization is a long way off.

“Today’s prisoner exchange in #Donbass will bring relief to the persons involved and their families, but it will not bring the (peace) settlement any closer,” Dmitri Trenin, head of the Moscow Carnegie Center and a former colonel in the Russian army, wrote on social media.

“The… terms remain anathema in Kiev, and this won’t change. The conflict is much more likely to become frozen than resolved.”

Russian leader Vladimir Putin and Zelenskiy prepared the ground for the exchange at a summit in Paris earlier this month.

Kiev’s forces have been battling separatists in the Donbass region since 2014 in a conflict that has claimed more than 13,000 lives. Sporadic fighting continues despite a ceasefire agreement.

Relations between Ukraine and Russia collapsed following Moscow’s annexation of the Crimean peninsula in 2014, and its subsequent support for separatists in eastern Ukraine.

There have been several prisoner exchanges between Kiev and the separatists. In the last swap, conducted in December 2017, Ukraine handed over about 300 captives in exchange for around 70 people.

Zelenskiy won a landslide election victory in April promising to end the conflict.

Widely criticized domestically for his plan to grant special status to Donbass to help end the five-year conflict, Zelenskiy’s latest actions have given rise to cautious optimism in some quarters.

In September, after a carefully negotiated rapprochement, Russia and Ukraine swapped dozens of prisoners, a move that brought Western praise.

Relations between the two countries have shown signs of improving in other areas too, including in the gas sector, where Kiev and Moscow are discussing a new transit contract.

Ukraine has repeatedly accused Russia of using gas supplies to put it under pressure, but last week the parties managed to agree on the main points of a new deal.