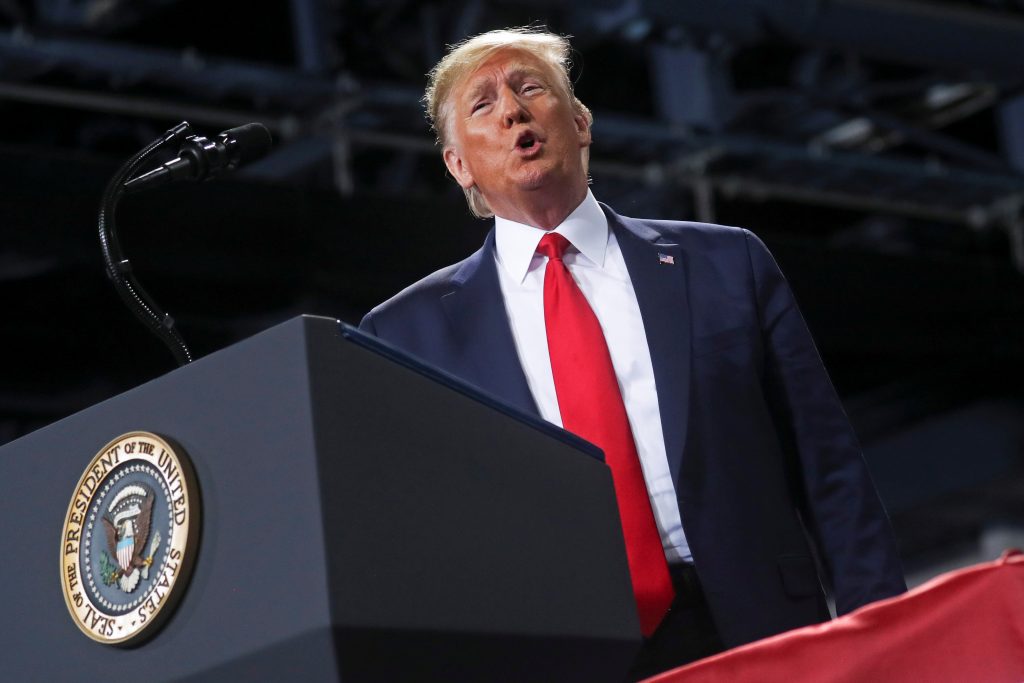 President Donald Trump retweeted a post that included the alleged name of the anonymous whistleblower whose complaint ultimately led to Trump’s impeachment by the House.

Just before midnight Friday, Trump retweeted a message from a Twitter account that claims to be a woman named Sophia who lives in California. The account shows some indications of automation, including an unusually high amount of activity and profile pictures featuring stock images from the internet.

By Saturday morning, the post seemed to have disappeared on many users’ feeds, suggesting Trump had deleted it, though it could still be found in other ways, including on a website that logs every presidential tweet.

The retweet then reappeared Saturday night. Twitter told The Associated Press that an outage with one of its systems caused tweets on some accounts, including Trump’s, to be visible to some but not others.

Trump has repeatedly backed efforts to unmask the whistleblower. But his Friday night retweet marks the first time he has directly sent the alleged name into the Twitter feed of his 68 million followers.

Unmasking the whistleblower, who works in the intelligence field, could violate federal protection laws that have historically been supported by both parties.

The whistleblower filed a complaint in August about one of Trump’s telephone conversations with Ukraine’s President Volodymyr Zelenskiy and other dealings with the Eastern European nation. The complaint prompted House Democrats to launch a probe that ended with Trump’s impeachment earlier this month. The matter now heads to the Senate, where the Republican majority is expected to acquit the president.

The central points from the whistleblower’s complaint were confirmed during the House impeachment hearings by a string of diplomats and other career officials, many of whom testified in public. The White House also released a transcript of Trump’s July 25 phone call with Zelenskiy, in which he asks for help investigating former Vice President Joe Biden and the Democratic National Committee.

Speculation about the whistleblower’s identity has been circulating in conservative media and on social media for months.

U.S. whistleblower laws exist to protect the identity and careers of people who bring forward accusations of wrongdoing by government officials. The Associated Press typically does not reveal the identity of whistleblowers.

Trump insists he did nothing wrong in his dealings with Ukraine and has asserted that the whistleblower made up the complaint, despite its corroboration by other officials. Trump also argues that he has a right to face his accuser and has called on the whistleblower to step forward.

For months, an array of right-wing personalities, amateur pro-Trump internet sleuths and some conservative news outlets have published what they claim to be details about the whistleblower, including name and career history. The president himself has also been inching closer to outing the individual; earlier this week, Trump shared a tweet linking to a Washington Examiner article that included the alleged name.

Surfermom77, the Twitter handle on the post Trump retweeted, describes herself as a “100%Trump Supporter” and California resident. The account had nearly 79,000 followers as of Saturday afternoon. Some of its previous posts have denounced Islam and sharply criticized former President Barack Obama and other Democrats.

Surfermom77 has displayed some hallmarks of a Twitter bot, an automated account. A recent profile picture on the account, for instance, is a stock photo that is available for use online.

That photo was removed Saturday and replaced with an image of Trump.

Surfermom77 has also tweeted far more than typical users, more than 170,000 times since the account was activated in 2013. Surfermom77 has posted, on average, 72 tweets a day, according to Nir Hauser, chief technology officer at VineSight, a technology firm that tracks online misinformation.

“That’s not something most humans are doing,” Hauser said.

While many bots only repost benign information, others have been used to spread disinformation or polarizing claims, as Russian bots did in the lead up to the 2016 election.

Twitter has not removed the tweet from Supermom77 or tweets from others who have named the alleged whistleblower.

“The Tweet you referenced is not a violation of the Twitter Rules,” the company wrote in a statement emailed to The Associated Press.

Some details about the whistleblower that have been published online by Trump’s supporters have been inaccurate or misrepresented.