Community The ‘Guardian Angels’ Are Back to Patrol Crown Heights
Community 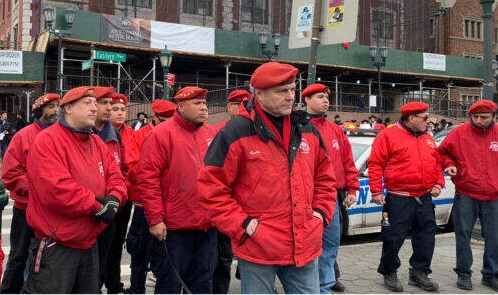 The unarmed crime-prevention group Guardian Angels, who have fought crime in New York City since their founding in 1979, have resumed their patrol of Crown Heights following a series of anti-Semitic attacks.

Guardian Angels founder Curtis Sliwa and his iconic red-clothed members were seen on Eastern Parkway on Sunday morning stating they will also be patrolling the Jewish neighborhoods of Williamsburg and Boro Park.

“These attacks are taking place and the cops have not been proactive at all,” Sliwa said about the violent attacks and verbal abuses Jewish people from all ages and backgrounds.

Sliwa, whose organization is a nonprofit group, also accused Mayor Bill de Blasio of inaction. “It comes from City Hall and the mayor. He’s been just apathetic,” he said about the mayor.

Sliwa also stated that local leaders of the Lubavitch Hasidic movement asked for his group’s help and he believes Guardian Angels patrols will halt the violence.