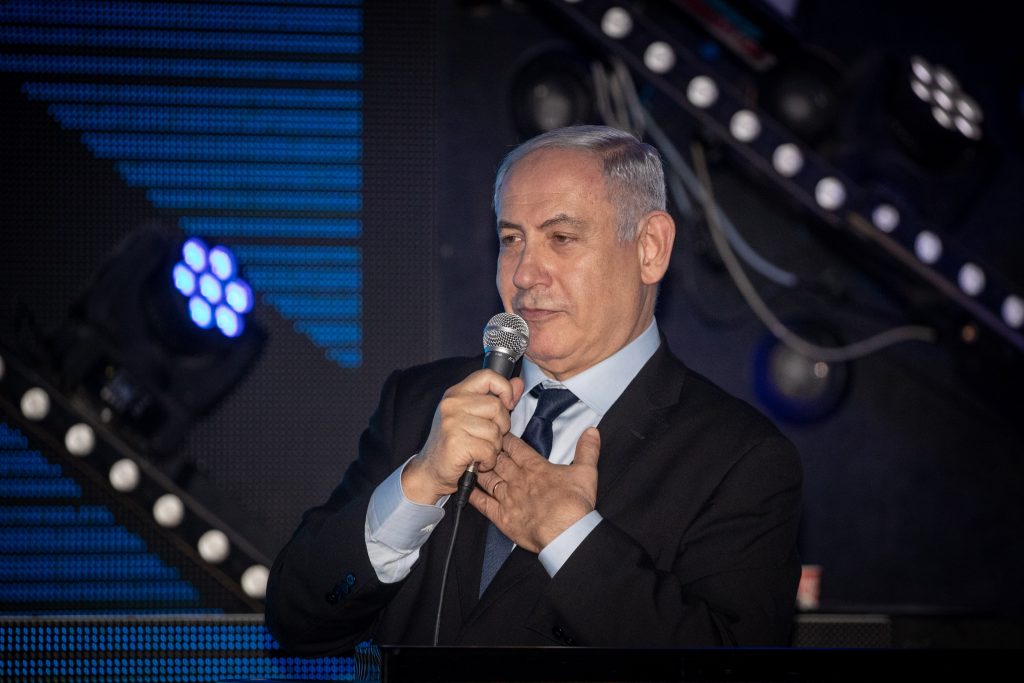 Prime Minister Binyamin Netanyahu‏‏’s political opponents attacked him Wednesday night after security personnel had to escort him from the stage of a campaign event in Ashkelon when a rocket from Gaza targeting the city set off air raid sirens.

The IDF said an Iron Dome interceptor brought down the rocket, and b’chasdei shamayim, no injuries were reported.

Except, that is, to Netanyahu’s reputation as being strong on defense and security.

Referring to a similar incident in Ashdod four months ago, Yisrael Beytenu leader Avigdor Liberman issued a statement saying, “This is the second time this year that terrorist operatives in the Gaza Strip humiliated the State of Israel, and the Prime Minister once again, in the midst of an election rally, is taken off the stage into a protected area. The only difference is that last time it was during a speech in Ashdod and this time in Ashkelon.

“Between this and the previous time, Netanyahu continued to preach and promote a treaty with Hamas, but the sad truth is that there never was a treaty and never will be a treaty. What there is, is a surrender to terrorism and no play of words will change the reality that we are in. Netanyahu, who in 2009, promised that when he was elected will destroy Hamas, has allowed Israeli deterrence to collapse, “Liberman said, according to Arutz Sheva.

“Again Amir Peretz’s Iron Dome saved Netanyahu. The truth needs to be said. Without the Iron Dome that protects the Israeli home front, Netanyahu would already not be prime minister,” he said.

Benny Gantz said it was “a badge of shame” that the prime minister “can’t tour part of his country” because of terrorist rockets.

“We will flip the government, change the policies and return the deterrence and quiet to the residents of the south,” he promised.

Netanyahu returned to the stage after about 15 minutes and had his say: “The last person who fired the rocket last time is no longer with us. The person who did it this time should start packing their things,” he said, a reference to last month’s assassination of Baha Abu al-Ata, a Palestinian Islamic Jihad terror leader who Israel believes ordered the rocket attack in September.

The Times of Israel observed that “in most cases, senior politicians refrain from announcing their visits to the area surrounding the Gaza Strip ahead of time out of concern that it could attract attacks. That was not the case with the September and Wednesday night events. In both cases, the prime minister had publicized that he would be attending in advance. The Likud leadership primary is scheduled to be held Thursday.”