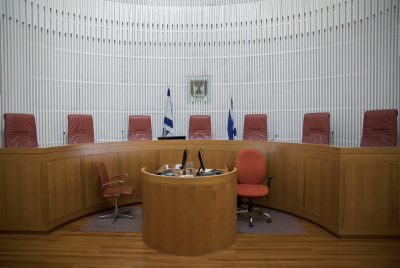 Months after he was indicted on terror charges, the Israel Bar Association on Tuesday decided to throw out Tarak Barghout.

Barghout was a long-time attorney who generally represented terrorists in Israeli courtrooms, and was well-known in the legal system. He was arrested earlier this year and has been in custody for over six months.

With the move, Barghout’s license as an Israeli attorney has been canceled. He will not be allowed back into the organization in the future, it said.

He was arrested in February together with Zakaria Zubeidi, a senior Palestinian Authority official. The two had planned further attacks together, with at least one, which they planned for December of last year, canceled because of bad weather. All the shooting attacks were at Israeli buses carrying civilians. The two scouted out sites for the attacks and traveled to the site of attacks using an official Palestinian Authority vehicle, used by Zubeidi for his work in the PA’s “prisoners ministry.”

A Shin Bet official said that “the matter is very serious, as it is a senior PA member who is involved, along with an Israeli attorney. The two carried out serious terror attacks, using an official PA vehicle. The Shin Bet, Israel Police, and IDF will continue to intervene to prevent such attacks and hunt down those responsible for them.”