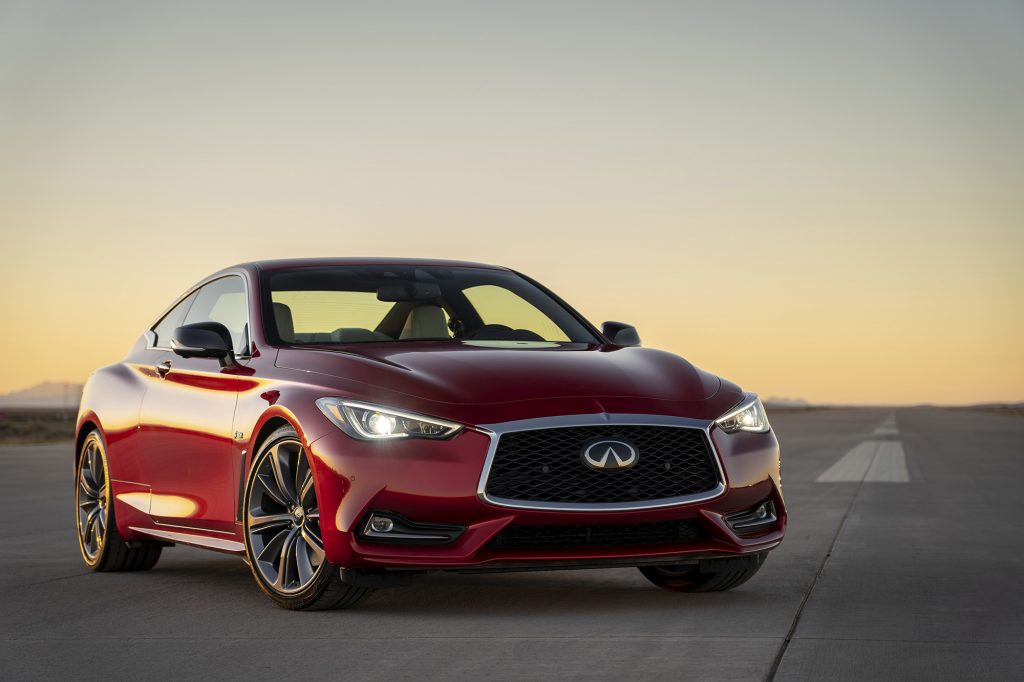 The Infiniti Q60 Red Sport 400 is another mouthful of luxury alphanumeric badging that will make your brain hurt.

Infiniti has come a long way from the somnolent 1989 ads that introduced the brand — not with footage of sleek cars — but with quietly narrated commercials about water and geese. I’m not making this up. Thirty years later, the growly, aggressive, shapely Q60 has no patience for water. Or geese.

Cresting the curvy hills of west Oakland County, Mich., I toggled the Q60’s drive mode to Sport Plus and put pedal to metal. Four-hundred horses under the hood roared in unison, the quick seven-speed transmission firing off shifts like a shotgun. Hustling into a tight bend, I flicked through downshifts as the exhaust barked loudly.

If a flock of geese was anywhere nearby, it would have scattered.

Red Sport, Hellcat, Viper. That’s a lot of underworld references. You get the point. This isn’t your father’s Infiniti.

It’s taken a long time, but Nissan’s luxury brand has finally produced a halo coupe with personality, style and twin-turbo V-6 power. All that beauty still sits on top of Nissan’s aged rear-wheel drive FM platform which has been the bones of everything from the Nissan 370Z to the late Infiniti G35.

If the Japanese brand can stick with its nomenclature and update its platforms over time, it has a chance to bottle a credible formula of emotion and value.

Start with the fundamentals. The Red Sport’s powerful baritone comes from the same twin-turbo V-6 found in the base coupe that puts out a detuned 300 horses. Infiniti then wraps this playful mill in its updated, head-turning Infiniti design (also found in the compact QX30 ute, of all things). The hood and flanks are deeply scalloped. The lines flow to all the right places over 20-inch wheels.

With its lower hood and grille, these new cars eschew the heavy, swollen-cheek appearance of other Infiniti models. The Q’s pouty grille (essentially an inverted Jaguar mouth) is flanked by angry, LED running lights that glow with menace in your rearview mirror.

Sitting next to a hippy $90,000 Lexus LC500 coupe in the M1 Concourse paddock, the Infiniti holds its own.

Slip inside and the premium vibe dulls. The sculpted door handles continue the sinewy lines of the exterior, but the old Infiniti FM architecture shows its age in the console and instrument panels. If you cross-shop with state-of the-art digital interiors from BMW or Audi, you’ll be taken back in time. There’s an old-school truck brake for the emergency brake. Analog displays and screens are from another era, though they make up in utility what they lack in modernity.

The dual-stacked screens remind of old Honda Accords (the 2019 version of that mainstream sedan shames the Infiniti’s interior architecture), but they work together nicely — separating navigation and radio/vehicle information that now have to co-exist on state-of-the-art tablet displays of competitors.

The Q60 may lack the digital pizzazz of its class peers, but it’s up-to-date on the latest digital driver-assistance features like pedestrian emergency braking, blind-spot assist, and adaptive cruise-control (or Intelligent Cruise Control in Infiniti-speak). After I’d had my jollies at M1 Concourse and exhausted Oakland County’s twisties on my way home, I merged into clogged highways where the adaptive cruise system is useful in maintaining a distance from other cars — and from (ahem) state police speeding tickets.

Even the navigation system — usually a horror show in vehicles these days — was reasonably competent, and Nissan provides a remote control knob for zooming in or out depending on the destination. Still, the option of Apple CarPlay and Android Auto app compatibility for superior phone navigation is a must, and here Infiniti lags. Compatible systems aren’t due for another couple of years.

Mrs. Payne, my right-seat navigation expert, groaned at Apple CarPlay’s absence. But she didn’t groan at the price.

Loaded to the gills with all-wheel drive, digital gewgaws and two-tone leather interior, my racy coupe stickered for $62,000 — a healthy $20,000 cheaper than a comparable BMW M4 coupe. For the M4’s stratospheric $80,000 you could walk out of the Nissan/Infiniti dealership with a Red Sport and a low mileage, pre-owned Nissan Rogue for off-the-grid hatchback adventures for which a sports coupe is ill-equipped.

What the Q60 is equipped for is getting your pulse racing.

The all-wheel drive Red Sport is nicely nailed to the road, meaning you can get into the throttle — and that glorious 7-speed box — confidently at corner exits. Corner entry is more a challenge, given the all-wheel drive car’s 4,000-pound heft. If you enjoy track days, you’ll want the lighter 3,866-pound rear-drive car.

If you’re buying an all-season sports tourer, then the all-wheel driver is a must for Midwest snows.

If you have $60,000 to drop on a performance coupe, then crave a rear-wheel drive, 405-horse BMW M2 or 500-horse Mustang GT350. They are quicker on track and carry epic brand histories.

But their fun ends with the first flakes of winter. If you want an all-season, all-wheel drive sports car that’s easy on the eyes — and the wallet — then the Infiniti is a solid choice. Compared to its AWD peer group — the 349-horsepower Audi S5 or 305-horse Lexus RC 350 F Sport AWD, the Infiniti is the only one to crest the magic 400-pony mark.

Most importantly, that means the Infiniti will walk away from its Japanese rivals. Pity that message didn’t shine through back in 1989 when Lexus advertised cars, not geese, and launched one of the America’s most coveted luxury brands.

Nice to have Infiniti finally in the game.