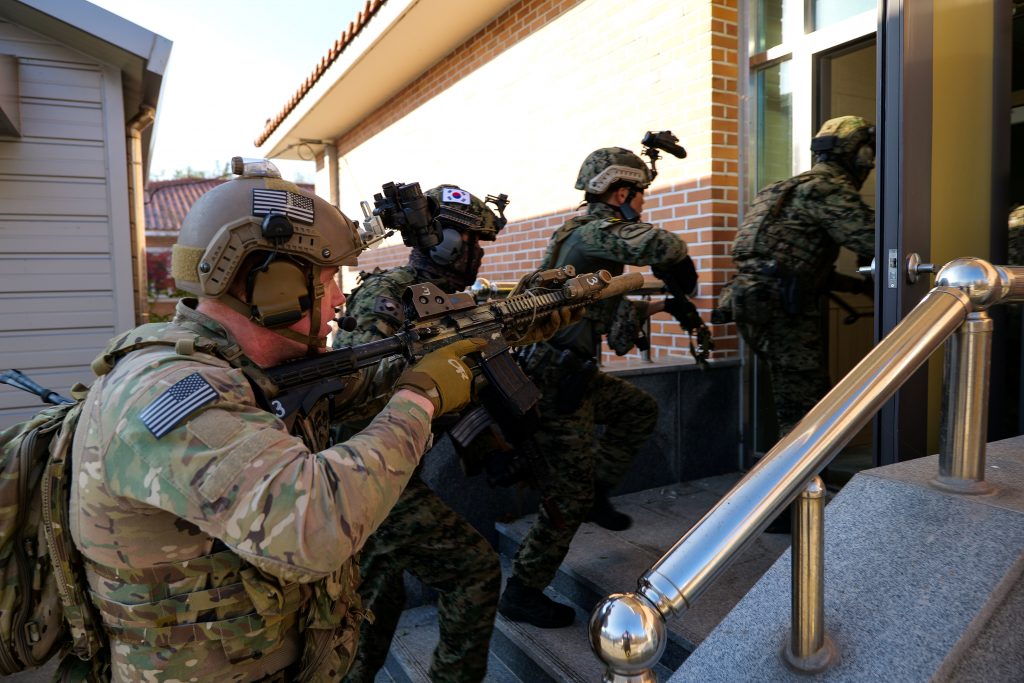 South Korean and U.S. special forces troops recently conducted drills simulating the infiltration of an enemy facility, U.S. military photos seen by Reuters on Monday show, as tensions with North Korea ratchet up ahead of a year-end deadline.

South Korean and U.S. commandos raided the facility and led out a man with his hands tied behind his back during the exercise described as a joint regular close-quarters battle training last month at a U.S. military base in the southwestern South Korean city of Gunsan.

A South Korean official said the drill was designed as a hostage rescue operation training as part of a counterterrorism drill conducted quarterly by the allies. The U.S. Forces Korea did not respond to a request for comment.

The rare release of the photos by the U.S. Defense Visual Information Distribution Service comes ahead of a year-end deadline set by Pyongyang for Washington to soften its stance in stalled talks.

The service is operated by an arm of the U.S. Department of Defense.

Screenshots of what it said was a now deleted video from the Pentagon showed a man in military uniform akin to that of North Korea collapse upon a gunshot from one of the commandos, Chosun Ilbo said.

Pyongyang has in the past accused the United States and South Korea of seeking to topple its regime with “hostile policy,” while slamming their regular joint military exercises as plots to “decapitate” its leadership and a rehearsal for war.

South Korea under a previous administration had planned to launch a special unit in 2017 tasked with “removing or paralyzing” North Korea‘s top command in the event of a war.

Tension has been growing in recent weeks as North Korea conducts a series of weapons tests and waged a war of words with President Donald Trump in an apparent bid to underscore its year-end deadline.

Earlier this month, Trump said the United States reserved the right to use military force against North Korea.

General Charles Brown, commander of U.S. Pacific Air Forces, said last week the U.S. military could “dust off pretty quickly and be ready to use” options it had developed during the height of tensions in 2017.