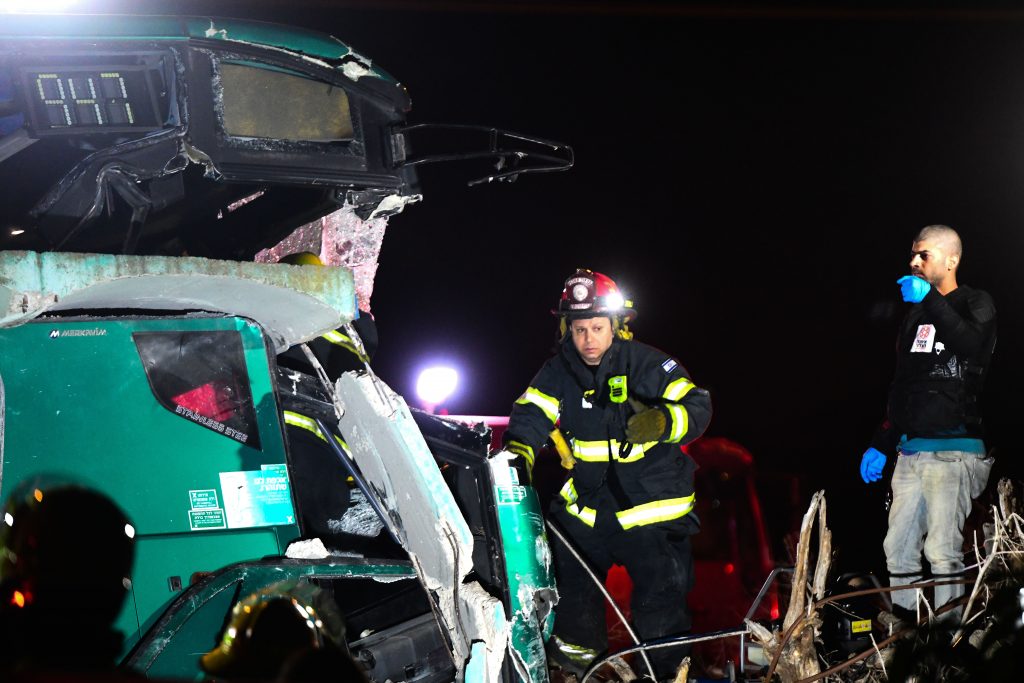 The driver of the bus which crashed into a concrete wall Sunday night, in an accident that killed four people, was arrested and will remain in custody for at least the next four days, as police sought and received an extension of his remand in a hearing Monday morning. He will be released to house arrest on Thursday.

The driver, a 44-year-old Haifa resident, is to be charged with involuntary manslaughter, which could see him go to prison for several years if convicted. Police asked that he remain in custody so they could continue to question him and build a case to determine what caused him to crash into the wall of a bus stop at the Bedek Junction, near Ben Gurion Airport.

Four people were killed and 14 injured in the incident. Of the injured, most were lightly hurt and had been released from the hospital by Monday morning after being taken there Sunday night. At least one remained in the hospital in serious condition. Levayos for those killed are to be announced.

The bus involved in the incident was the 947 line, between Haifa and Yerushalayim – one of Egged’s longer routes. Speaking to Reshet Bet, Yisrael Ganon, head of the Israel Bus Drivers Union, said that “drivers are under tremendous pressure to make their schedules. Some drivers continue on for many hours without a break, some for 12 hours at a time. We have said in the past that this is a ticking time bomb. The company has to provide drivers with opportunities to refresh themselves. Police will investigate as they have in other bus accidents, but it is always the driver who is to blame. They never look at the chain of events that led to the accident. The companies push the drivers too much.”

One driver interviewed on Reshet Bet said that the 947 route “has a terrible reputation among drivers. It’s very long, a minimum drive of three and a half hours. It is wearying and there is no break for the driver. Often when driving it I would get to the last stop and I could not find a place to park the bus – and by the time I did my break was over and I had to get back on the road.”

In response, the Transportation Ministry’s Public Transportation Authority said that “it is sad that there are those who would take advantage of this tragic event for their own purposes. We will await the results of the police investigation before making conclusions. The Authority works together with drivers and labor unions constantly to improve the situation of drivers. We invite the Union to work with us to ensure the safety and welfare of drivers.”