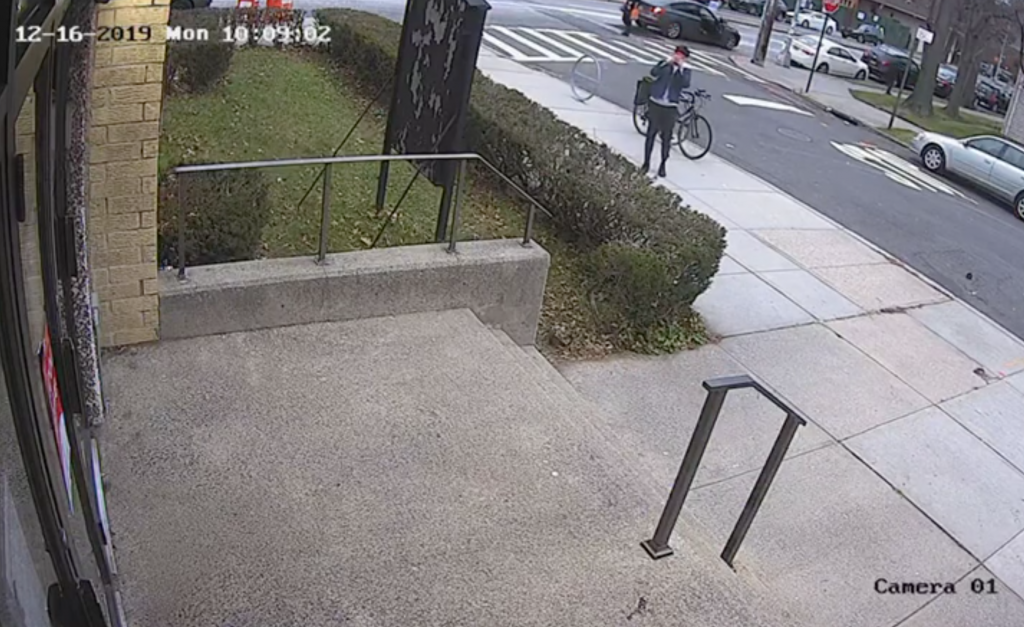 A suspicious man was seen apparently photographing outside a Queens shul this week, causing alarm in the community and heightened security measures.

Surveillance-camera footage taken Monday morning outside the Young Israel of Queens Valley, located at 141-55 77th Avenue in Kew Gardens Hills, shows a blue or gray sedan pulling up to the corner opposite the shul shortly after 10 a.m., just as a congregant is leaving. A few moments go by, and once the congregant moves on, the passenger door of the vehicle opens, and a young, dark-skinned man exits, leaving the passenger door open as he walks toward the shul. Another congregant then leaves. The young man waits for that congregant to move on as well, then he holds something up in front of his face – possibly a camera – for a few moments. The man pauses while a car passes, then resumes holding the device up. Moments later, another congregant emerges, and the man ceases his activities and returns to the sedan.

A person familiar with the shul who spoke with Hamodia speculated that from the angle the man was facing, it appears that he may have been photographing the shul’s schedule board.

In a letter sent to congregants Thursday, shul President Dr. Martin Braun writes that the incident has been reported to police, as well as the offices of Councilman Rory Lancman and Assemblyman Daniel Rosenthal.

“I just finished speaking with the 2 detectives who have been assigned to our case,” writes Dr. Braun. “They informed me that due to the heightened security alert following the Jersey City shootings, patrol cars now regularly drive by all Houses of Worship, regardless of their affiliation. Additionally, due to the incident mentioned above, they themselves will be checking regularly on our shul, in an unmarked car.”

The shul is taking additional precautions, including hiring a second armed guard for Shabbos, and locking the shul doors on Shabbos – a guard or volunteer will let congregants in.

“It’s disheartening that we need to have this sort of security outside a house of worship, but this video is the latest demonstration of why such precautions are sadly necessary,” Assemblyman Rosenthal told Hamodia. “I have spoken with top NYPD officials; they have been responsive and are giving this matter the appropriate attention.”