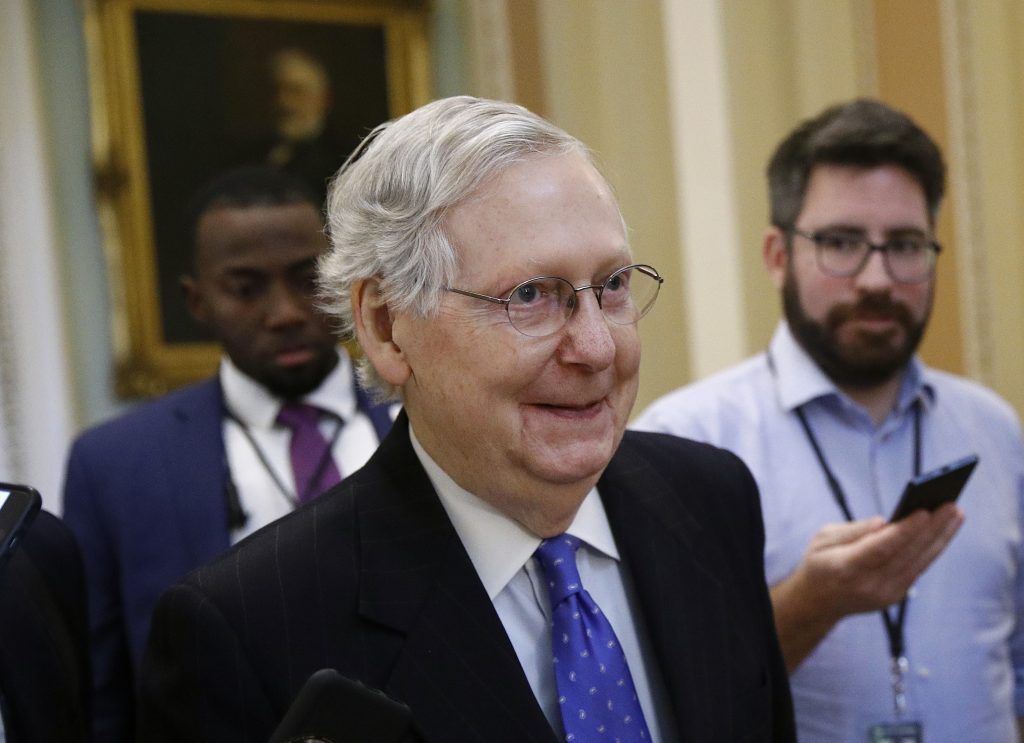 Lawyers close to President Donald Trump are exploring whether House Speaker Nancy Pelosi’s decision to temporarily withhold articles of impeachment from the Senate could mean that the president hasn’t actually been impeached.

The legal argument, according to a person familiar with the legal review, is that if Trump has been officially impeached, the U.S. Senate should already have jurisdiction. Backers of the theory would argue that the clause of the U.S. Constitution that gives the Senate “the sole Power to try all Impeachments” indicates that the impeachment isn’t formalized until the House reported the charges to the upper chamber.

The case is largely a rhetorical one, but could provide the White House and Senate Republicans leverage as lawmakers debate when and how to conduct a trial on charges that the president abused his power to solicit an investigation into political rival Joe Biden and obstructed the congressional investigation into the matter.

Speaking Thursday in the Oval Office, Trump said it was “unconstitutional” for Pelosi not to submit the articles of impeachment to the Senate.

“To me, it doesn’t feel like impeachment,” Trump added.

Pelosi suggested Wednesday night that she might wait to appoint “managers” who present the case for the president’s removal to the Senate until Majority Leader Mitch McConnell commits to rules that would ensure a “fair” trial. The gambit, which was advocated by liberals within Pelosi’s caucus, appears to be an attempt to pressure McConnell, R-Ky., to call current and former White House officials who declined to participate in the House investigation to testify. Senate Republicans have indicated their preference is for a short trial, without witnesses, followed by a quick vote to acquit the president.

Trump on Thursday said the maneuver was evidence Pelosi, D-Calif., was “afraid” to present the impeachment to the Republican-controlled Senate, where he is expected to be acquitted.

And Josh Holmes, a former chief of staff to McConnell, called Pelosi’s decision a gift to Republicans.

Pelosi said on Thursday that she didn’t “care what Republicans say” and wasn’t prepared to name impeachment managers “because we don’t know the arena that we are in.” She noted that under House rules adopted for consideration of the impeachment articles, she could call up a resolution naming those people at any time, with no expiration.

Laurence Tribe, a constitutional law professor at Harvard University, tweeted that Senate rules requiring the House to immediately present articles of impeachment would also be unconstitutional.

“It’s up to the House when and how to prosecute its case in the Senate,” Tribe said.