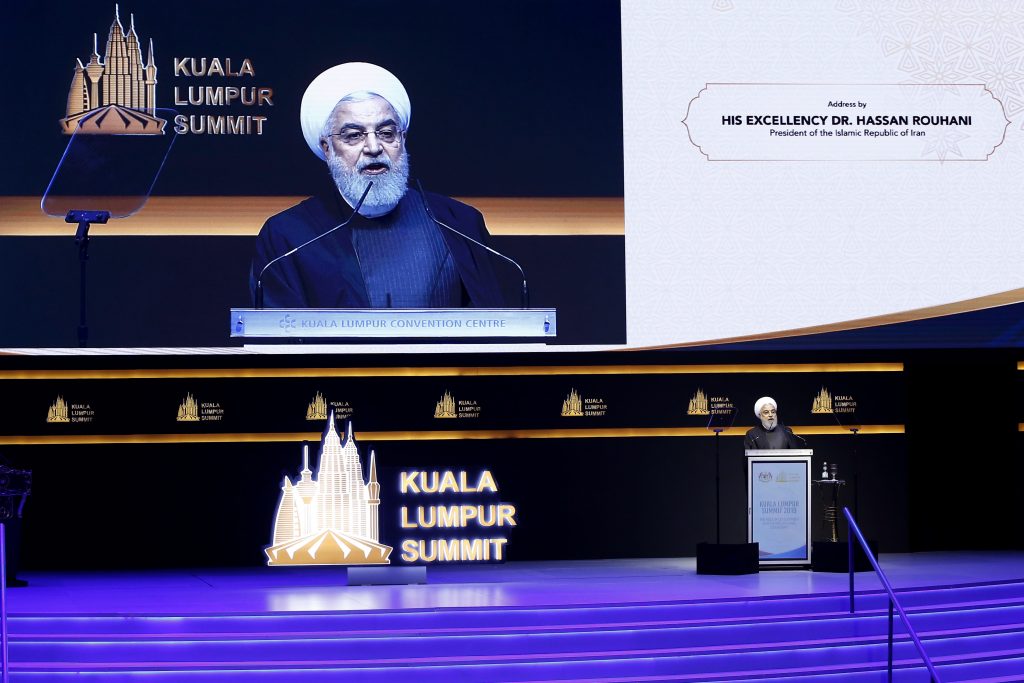 Iranian President Hassan Rouhani on Thursday urged Muslim nations to deepen financial and trade cooperation to fight what he described as U.S. economic hegemony, using an Islamic conference in Malaysia as a platform to decry American sanctions against his country.

Rouhani repeated his assertion that the U.S. has used economic sanctions as the “main tools of domineering hegemony and bullying” of other nations.

Iran has been gripped by violent protests since last month amid anger over a sharp hike in gasoline prices following U.S. sanctions after Washington withdrew last year from Iran’s 2015 nuclear deal with world powers. There has been a wave of arrests in Iran and rights group Amnesty International has said at least 304 people were killed in the anti-government protests.

Rouhani said the U.S. sought to cripple Iran with the “heaviest sanctions” but the country’s economy is on the mend and moving away from reliance on oil.

“The Muslim world should be designing measures to save themselves from the domination of the United States dollar and the American financial regime,” he said at the opening ceremony of the three-day conference that included leaders from Turkey, Qatar and host Malaysia.

Rouhani suggested the creation of a special banking and financial mechanism among Muslim nations, using local currencies for trade and giving each other trade privileges to deepen linkages.

He said rising extremism as well as challenges such as weak governance, poverty and corruption are endangering sovereignty and paving the way for Western interference in Syria, Yemen, Afghanistan and other Muslim nations. But if Muslim countries harness their collective strength, they could confront such problems, he said.

Rouhani proposed the Kuala Lumpur conference establish a joint fund to finance technological cooperation among Muslim nations, set up a a joint research center in artificial intelligence and cyberspace, and create a Muslim market in digital economy and cryptocurrency.

Turkish President Recep Tayyip Erdogan launched a veiled criticism against the OIC, telling the conference that the platform that brings the Muslim world together was besieged by a “lack of implementation.”

“We still haven’t made any progress regarding the Palestinian cause, we still can’t stop the exploitation of our resources, we still can’t say ‘stop’ to the fragmentation of the Muslim world over sectarianism, that’s why,” said Erdogan.

Muslims account for 94% of worldwide conflict with one out of three arms sold globally finding its way to the Middle East, he said. “The Muslims are using their resources for armament and for conflict and while doing so they are enriching the Western arms dealers,” he added.

Rouhani leaves Friday for a two-day visit to Japan.