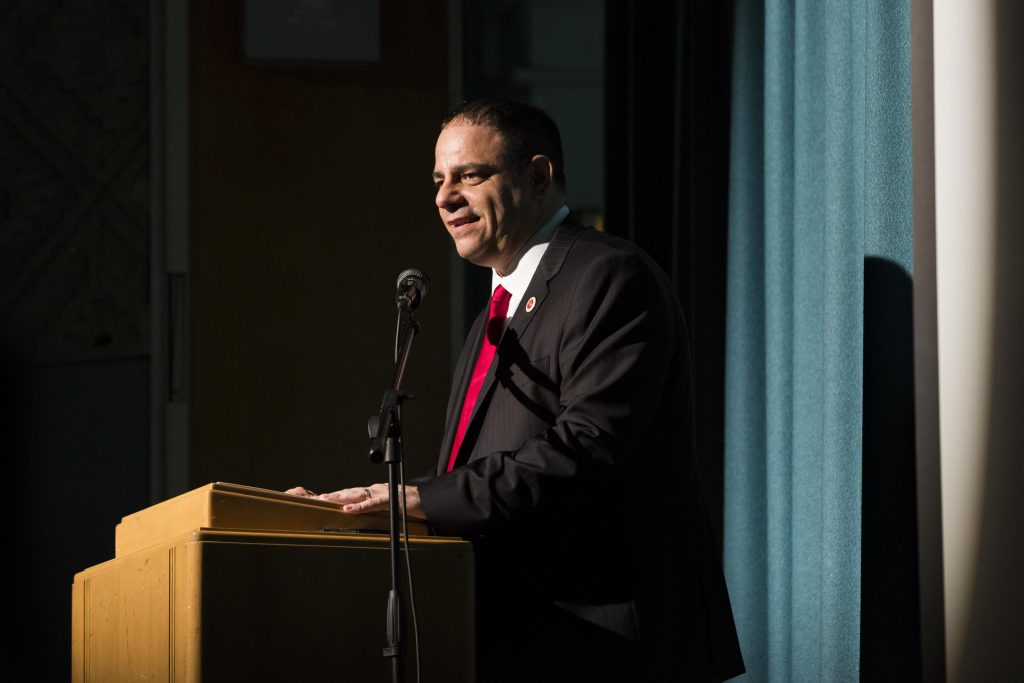 A candidate for Queens Borough President, Costa Constantinides, hired a staffer active in the BDS (Boycott, Divestment and Sanctions) movement against Israel – and brought that staffer with him to a forum last month with Orthodox Jewish leaders, Hamodia has learned. The Constantinides campaign says it was unaware of the staffer’s positions when she was hired and that they are not reflective of the candidate’s views.

The Queens Borough President forum, held November 26 at the Young Israel of Kew Gardens Hills, featured candidates including Councilman Constantinides, Councilman Donovan Richards, Assemblywoman Alicia Hyndman and former Councilwoman Elizabeth Crowley. (One candidate, Councilman Jimmy Van Bramer, did not participate in the forum.) A special election is expected to be called late this winter to replace outgoing Borough President Melinda Katz, who will become the borough’s district attorney on January 1.

Approximately 30 rabbis, school principals, elected officials and other Orthodox Jewish leaders were in attendance, and asked the candidates questions pertaining to the Jewish community, including combating the rise of anti-Semitism, support for Israel and opposition to BDS. Several attendees who spoke with Hamodia say that particularly during questions related to Israel and BDS, Constantinides’ aide, a young Jewish woman named Marla Solow, appeared to be uncomfortable and acting strangely. One of the attendees then pulled out his phone, Googled Solow’s name, and discovered that she is a BDS activist.

A photo on social media shows Solow holding a sign reading, “In solidarity with Palestinian prisoners on hunger strike!” One of her social-media profile pictures shows her next to an image of a Palestinian flag and the words “Yes to Divest!”

An article on mondoweiss.net, a Jewish pro-BDS site, says Solow was one of a number of Barnard College students who spoke publicly in April 2018 to urge Barnard’s divestment from “companies complicit in Palestinian human rights violations.” The Columbia Spectator online newspaper, reporting on the same event, identifies Solow as a member of the class of 2019 and a member of the pro-BDS group Jewish Voice for Peace. A profile on bwog.com, a Columbia student news site (Barnard is affiliated with Columbia), says Solow’s “claim to fame” is “yelling at Zionists on campus.” She lists the Barnard student referendum on BDS as her “favorite Columbia controversy.”

After U.S. Rep. Ilhan Omar (D-Minn.) was accused of anti-Semitism for saying American support of Israel was “all about the Benjamins,” Solow signed a letter on the website jewswithilhan.org that reads, “There is absolutely nothing anti-Semitic about calling out the noxious role of AIPAC (the American Israel Public Affairs Committee), which spends millions each year to buy U.S. political support for Israeli aggression and militarism against the Palestinian people.”

Participants at last month’s Borough President forum at the Young Israel tell Hamodia they were shocked to learn of Solow’s activities — and that Constantinides would take this staffer with him to that particular forum.

“Bringing this person to an Orthodox Jewish event shows extremely poor political judgment,” says Rabbi Chaim Schwartz, Executive Vice President of Vaad Harabonim of Queens. “More importantly, it’s appalling that Constantinides’ campaign would hire a staffer like this in the first place. At best, they did not do a minimal background check. At worst, it may show what sort of views Constantinides has sympathies for, or at the very least tolerates — particularly as this staffer is still working for the campaign.”

Jewish communal leaders say they are particularly surprised because Constantinides — who is halachically Jewish, as his maternal grandmother was born Jewish and converted to Christianity — is a member of the City Council’s Jewish Caucus and has had warm relations with the Jewish community.

“Constantinides seems to be a very nice, fine gentleman, who proudly makes mention of his Jewish roots,” says Rabbi Yoel Schonfeld, rabbi of Young Israel of Kew Gardens Hills. “But it’s very disappointing to learn that he brought such an individual into my shul. She obviously has a visceral hatred of Jewish causes and the state of Israel. The candidate exercised poor judgement in this case.”

In a statement to Hamodia, a Constantinides campaign spokesman said, “Costa takes tremendous pride in his Jewish roots. He joined the Jewish Caucus to stand up against anti-Semitism, he voted for a 2016 resolution condemning efforts to delegitimize the State of Israel, and he will continue to support the Orthodox community and Israel in whatever office he holds. We were unaware of this campaign staffer’s position at the time of her hiring and weren’t informed until after this event, where she did not express any opinions and made no political statements. Even though he has a difference of opinion with this staffer, Costa respects her right to have her own view.” The Constantinides campaign declined to make Solow available to speak with Hamodia.

Rabbi Schonfeld said that the campaign’s statement does not alleviate his concerns.

“Jews should definitely think twice before supporting any candidate who has a staffer like this, who has declared war on the Jewish people and its homeland,” he said. “It’s not acceptable that they didn’t know her positions. Either they knew, or they did not do a proper background check before hiring her.”