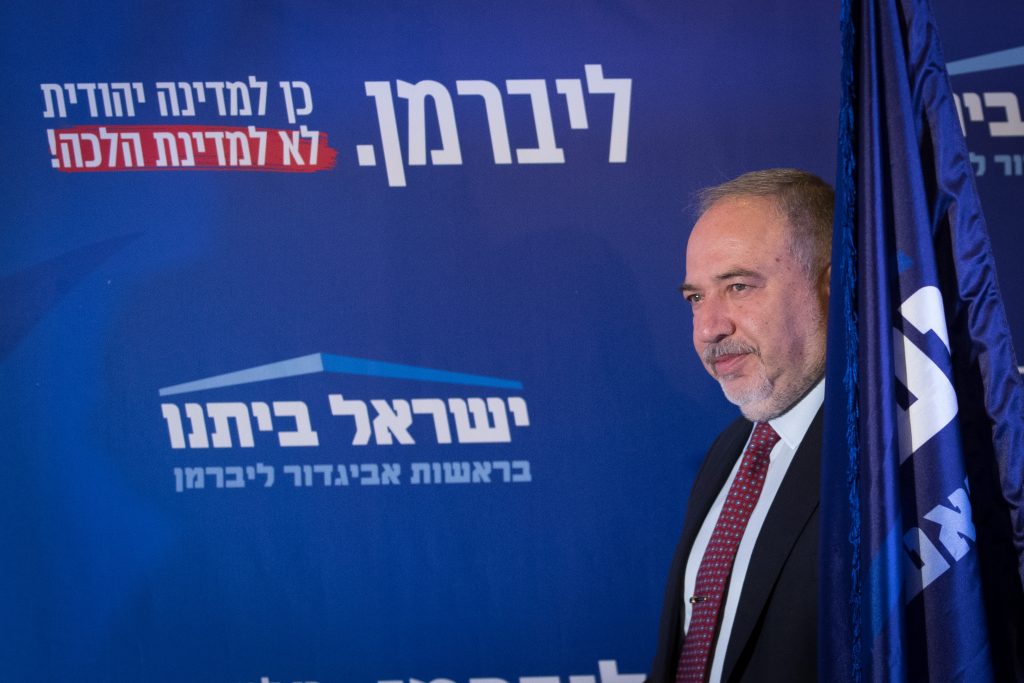 A report Wednesday said that Avigdor Liberman has offered Ayelet Shaked – of late the chairperson of the religious rightwing Yemina party – the number-two slot on his Yisrael Beytenu party, which has made anti-religious stances its main political platform. The report, by the Zman Yisrael news site, has been confirmed by Shaked, but she said Wednesday that she did not consider the offer “relevant.”

With the breakup of Yemina, Shaked has reverted to her previous position as one of the founders of the New Right, but she has said that she may not run under that party’s banner in the next election. Her partner in that party, Naftali Bennett, has already launched its campaign, and Shaked has been noticeably absent from the party’s posters and literature.

Shaked is said to be considering remaining on the religious right, which would mean she would join the United Right List – and for that, she sustained sharp criticism Tuesday from party chairperson Rabbi Rafi Peretz, who accused Shaked of trying to unseat him. Yisrael Hayom quoted Peretz as saying in a party meeting that bringing Shaked back to lead the party would be “crazy. If I were head of the religious Zionist list and I managed to bring in seven Knesset seats they would have kicked me out, and here we have only five. She acts as if nothing has happened, nothing has changed. How can it be that just a year ago,” when Bennnet and Shaked left the United Right List and started the New Right, “they basically eviscerated the religious right, and now they are getting rewards for doing so?”

Shaked, along with Transportation Minister Betzalel Smotrich and Jewish Home MK Moti Yogev, have advocated for an open primary for all members of parties on the religious right. Peretz is said to be the main opponent of that, despite the fact that thousands signed petitions demanding one. In a statement Monday, Jewish Home said that “although we see primaries as a proper idea in principle, we do not believe it to be appropriate at this time, as it will change the structure of the main Religious Zionist party. Ensuring that the party remain in its current form is necessary because of several reasons, including the fact that the New Right is not part of this process, and that voters might be concerned over changes.”

In response to Peretz’s comments, sources close to Shaked told Yisrael Hayom that Peretz, “who in polls is barely touching the electoral threshold, should not be talking about getting seven Knesset seats. In the same vein, a political leader need not fear primaries. It is a democratic process, not an attempt to unseat anyone. His own party’s central committee is demanding primaries. He has to give them reasons why he refuses.”