National GOP Embraces Trump As Never Before with Anti-Impeachment
National 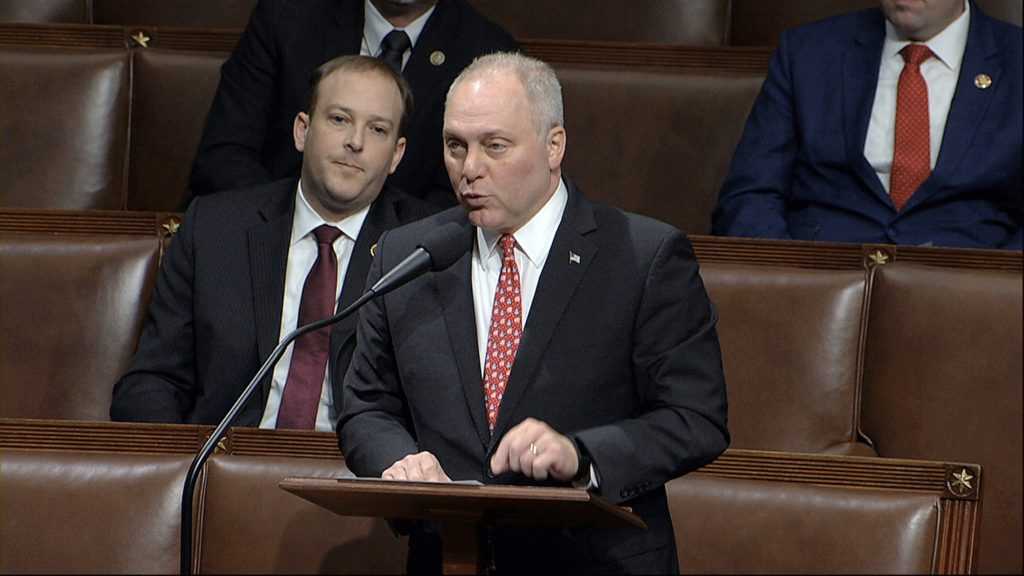 House Republicans’ unbroken opposition to impeachment is their most unapologetic embrace of President Donald Trump yet, binding them to a president whose loyalty from his party’s core conservative voters is matched only by his opponents’ loathing for him.

Just three months ago, initial revelations of a phone call in which Trump tried squeezing Ukraine’s new president to announce an investigation into Democrats gave a handful of Republicans pause. By Wednesday, the Democratic-led House neared a vote to impeach Trump over expected unanimous GOP opposition, a moment spotlighting his hold on congressional Republicans and raising questions about the vote’s political impact.

“Trump is strong as a tank with Republicans,” said Rep. Patrick McHenry of North Carolina, a member of the House GOP leadership. He said that along with what he called Democrats’ weak evidence against Trump and unfair impeachment process, “The combination of the three make this one of the easier votes we’ll cast.”

In the short-term, it was moderate Democrats from swing districts who seemed most at risk. Nearly all were expected to back impeachment, which could cost some their careers in next November’s congressional elections. The most vulnerable include several of the 31 Democrats representing districts Trump won in 2016, many of whom are freshmen.

“Today may be the only consequential vote they ever cast, because they won’t be back,” said Rep. Mark Meadows, R-N.C., one of Trump’s staunchest defenders.

“You can play to the base and excite the base and turn an election here and there, but that’s not a long-term strategy. Demographics will take care of that” as anti-Trump younger, diverse voters join the electorate, said former Sen. Jeff Flake, R-Ariz., who declined to seek reelection last year after clashing with Trump for years. “There will be a time when we Republicans wake up from this and say, ‘We did this for this man?'”

“I don’t think the Republican Party nationally really exists anymore. It is now the Trump party,” said Rep. Kurt Schrader, D-Ore. “When he goes at some point, it will be interesting to see how they define themselves, what they stand for.”

In Trump’s past pivotal fights — including his failed effort to repeal former President Barack Obama’s health care law — congressional Republicans strongly rallied behind him, but there were small but significant numbers of defectors.

A handful of Republican lawmakers had expressed concern when word of Trump’s pressuring Ukraine first emerged in September. While stopping short of abandoning him, several initially took a middle-ground position, saying they wanted to learn more about what happened.

Wednesday’s expected unanimous GOP vote was coming after party leaders held numerous impeachment briefings for lawmakers. Those sessions were aimed at making sure they were “getting information to people,” said No. 2 House GOP leader Steve Scalise of Louisiana.

Rep. Francis Rooney, R-Fla., said early on that he wanted to learn more about what happened with Ukraine. After saying he was open to impeachment — and announcing his retirement the next day — he said Wednesday he was opposing impeachment after “agonizing over it” and deciding there was insufficient evidence to justify Trump’s removal.

“And that’s not necessarily the Republican Party that I’ve been part of and been a funder for, for many years,” he said. “This is a different era that we’re in for Republicans, and I don’t know where it’s going to go.”

With the impeachment vote coming just 11 months before the next presidential and congressional elections, Republicans said they believed it was Democrats who would be hurt.

“Pelosi has made this the party of impeachment,” Scalise said of Democrats led by Speaker Nancy Pelosi of California. “Clearly this has been a personal vendetta they’ve been carrying out to please their most radical base.”

One freshman Democrat from a closely divided district is Rep. Abigail Spanberger of Virginia, who is supporting impeachment.

“It’s about the presidency and I think it’s about upholding rule of law,” she said when asked how the GOP’s solid support for Trump would affect that party’s reputation. “So their conscience and their oaths are their own to consider.”

Peter Wehner, a Republican who served in the White House under GOP Presidents Ronald Reagan, George H.W. Bush and George W. Bush, said the Republican vote against impeaching Trump would only strengthen the “absolute headlock” he has on his party.

“For some period of time, the brand is going to be the Trump brand, which is divisive, misogynistic and unethical,” Wehner said. “The trouble for Republicans is that brand, the searing impression it’s going to leave, is going to be most vivid for the rising generation of voters.”