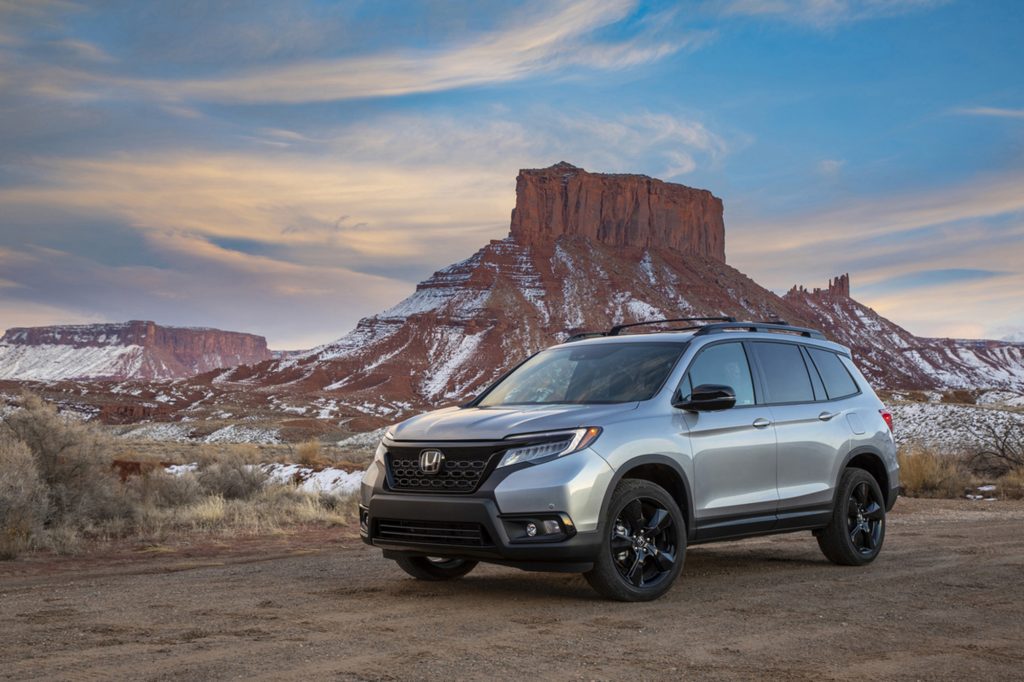 2019 Honda Passport Aims for a Bit of Ruggedness

Reality: Not bad, but not as rugged as advertised.

What’s new: The whole thing. Honda has pitched the Passport as a more rugged five-seater SUV than its other offerings.

But, all-wheel drive. I mean, that’s fine for me — whose idea of camping involves hotels without room service — but you tough people want four-wheel drive, thick tractor tires and winches. This ain’t that — no two-speed transfer case here — although it does offer different modes for mud, snow, and more.

In any case, it’s far better than the Isuzu version of the Passport that Honda sold in the 1990s.

Friends and stuff: The Passport offers a ticket to plenty of room for big people. It’s pretty much a shrunken Pilot, so without the third row, legs enjoy an impressive amount of room.. A middle child would not mind the center seat, where the hump is flatter than the Kitty Hawk dunes.

But with a need to offer “ruggedness,” even in faux form, the Passport requires a long climb to the passenger area (the downside of the 8.1 inches of ground clearance). And that flat hump means the passenger compartment is shorter than many. Headroom is fine, but the cargo space height is quite short. There’s just 77.7 cubic feet of space with the seat folded down, and we had a heck of a time fitting in one bicycle and a little bit of luggage while still leaving one-third of the rear seat upright.

Space behind the second row is a comparatively huge 41.2 cubic feet.

Up to speed: The 3.5-liter V-6 creates an impressive 280 horsepower, so the Passport is no slouch on the road. It gets to 60 mph in 5.4 seconds, according to Car and Driver. Just ask the nice police officer I met in Eastville, Va.

Shifty: The Passport uses a 9-speed automatic transmission to transfer the power to the road. My wife remarked that the PRND buttons look like a remote control all lined up there, a connection I’d never made.

Press the D/S button for Sport mode and feel the Passport really kick it. Unfortunately, it holds lower gears far too long, so it also kicks back hard on the downhills, an uncomfortable feeling. Just shift the gears yourself through the paddles to avoid this nauseating sensation.

On the road: The Passport feels its tallness on the curves, almost as if it’s going to tip over if you take them too fast. It’s comfortable for highway cruising, though.

The forward collision warning might be reclassified as Honda Supersensing, or Honda Hyperactivity, as that bright orange “BRAKE!” cried wolf more times than I could count in a week — for trees near country roads, parked cars, bridge abutments, oncoming cars, you name it. Chill, would’ya?

Setting a speed: I enjoy cruise control, especially the adaptive kind. But the Passport falls short on a couple of counts. First, its set distance seems a little random. In a competitive driving environment like the Schuylkill, it’s important to be able to close the gap with the car behind you, and I could never count on the Passport to keep up.

Second, after slowing down for another car, the Passport takes half of forever to return to the designated speed.

Driver’s Seat: All that said, though, note that the driver’s seat is exceedingly comfortable, especially for long trips. Even when you’re parked roadside and the lights are flashing red and blue behind you.

The view from the cockpit is impressive by today’s standards as well. The windows are tall, so passing is easy. Maybe a little too easy. But at least you can clearly see the nice police officer walking back to the Passport with the clipboard.

Play some tunes: I’ve had some impressive Honda stereos in recent months, but this isn’t one of them. It played just fine, and the controls — even lacking tuning dial — were not all that difficult to become accustomed to.

But the sound quality was only a B+ or so. I moved the equalizer around over and over and could never find a way to make my favorite songs sound just the way I wanted.

Night shift: The headlights offered great illumination of the road, but the map lights interfered with the view.

Fuel economy: I averaged about 24 mpg in a fairly flat round of testing with a lot of highway miles, even despite adjusting the speed downward after the nice chat with Virginia’s finest.

Where it’s built: Lincoln, Ala.

How it’s built: The Passport gets a 1 out of 5 on Consumer Reports’ predicted reliability scale.

Nissan Pathfinder Remains a Solid Value, But That’s About It

Conventional wisdom: Car and Driver likes the “solid value in this class, cushy cabin experience, notable 6,000-pound towing capacity,” but not that it “drives more boat-like than it should, middling cargo storage, small third row.”

What’s new: The Rock Creek Edition is the big news of the model year. For 2020, not much will change.

I never put the Pathfinder to a toughness test, but people looking for the real thing will have found it. The model’s intelligent four-wheel drive does offer a 4WD lock mode, as well as automatic and two-wheel drive modes. The SUV also tows up to 6,000 pounds, and the Rock Creek comes with a trailer hitch as standard. So, it’s a step above the Passport in that regard.

On the road: With Nissan’s takeover of Renault — stymied by the French government — fresh in my mind as I drove, I kept going back to one of my favorite French phrases: rabat-joie, translated literally for me as “joy-stealer,” but more like a spoilsport.

The Pathfinder in France would best be called the Rabat-Joie. (It’s actually the X-Trail.) Well, Mr. Driver’s Seat will send them the idea and wait excitedly by the phone.

Not only does it make traveling on twisting roads joyless and uninspiring, the Pathfinder even makes highways difficult. I’d never had to correct the steering so many times on a trip to Western Pennsylvania.

I expected the shorter Pathfinder to be a breeze to drive, but no.

Up to speed: The acceleration initially left me kind of pleased. Although Motor Trend said the Pathfinder’s 284-horsepower 3.5-liter V-6 takes a long 7.4 seconds to get to 60 mph, I thought it rolled onto highways without much trouble.

Spending more time with the Pathfinder left me disappointed. First, getting from 70 to 105 is far too easy — far easier than useful levels of acceleration, like for getting from 45 to 70. Yes, I found this out quite by accident.

Second, passing on steep hills is severely disappointing. While traveling a familiar mountain road in Western Pennsylvania, I found its ability to go from 30 to 60 uphill frighteningly inadequate. This is a move I’ve made on this particular road many times, so I know how it should feel.

Shiftless: Much of the blame rests with the Pathfinder’s CVT. No paddle shifters or stick shift allowed me to set the rpms. The available low setting may have helped, but I didn’t want to risk crunching the transmission so far from home.

Driver’s Seat: I found the accommodations fairly comfy. Nissan has worked out some rather nice leather seats that don’t leave one fatigued even on long trips. And the dashboard is fairly easy to read.

Friends and stuff: The rear two rows are surprisingly not bad. The middle row moves forward and back, which helps immensely. The leg room feels quite like economy class, but I’ve been in tighter (I’m looking at you, Mitsubishi Outlander). Head room is snug, and the rear seat sits very low. Foot room in back is poor and in the middle is, well, middling. (Of course, the Passport offers only two rows, so advantage Pathfinder.)

Play some tunes: Nissan clings to the old multi-button controls for its infotainment systems, and the result remains cumbersome at best. A dial in the center allows operators to twist around the touchscreen, but then a bevy of close to 20 buttons controls most functions. Knobs controlling volume and tuning certainly help a lot.

Navigating the system was not so difficult, but as in most Nissans, sound from the unit was a B-plus at best. If I wanted to get the treble right, it was too bassy, and vice versa. Advantage Passport.

Keeping warm and cool: Here, the cacophony of buttons becomes a bit of a struggle, as does the fact that they sit way down by the console.

Dials control heat for either side and a center dial controls fan speed. But the system control seems to follow its own moody guidelines to cooling unless you press “auto”; that was the only way to cool things down on a hot day.

Night shift: We began the return from our Labor Day adventure at 8:45 p.m., so plenty of time to test out the night qualities. The headlights illuminate the road nicely, while the interior lights run a little on the dim side.

Fuel economy: I averaged about 21 mpg in a lot of highway driving across Pennsylvania.

How it’s built: Consumer Reports gives the Pathfinder a 3 out of 5 for predicted reliability. Advantage Pathfinder.

In the end: This may be a more off-roady Pathfinder, but I’d like something that does roads better. Given a choice between the two, I’d have to pick the Passport, and given more leeway, I’d probably go for the Pilot or a Kia Telluride.