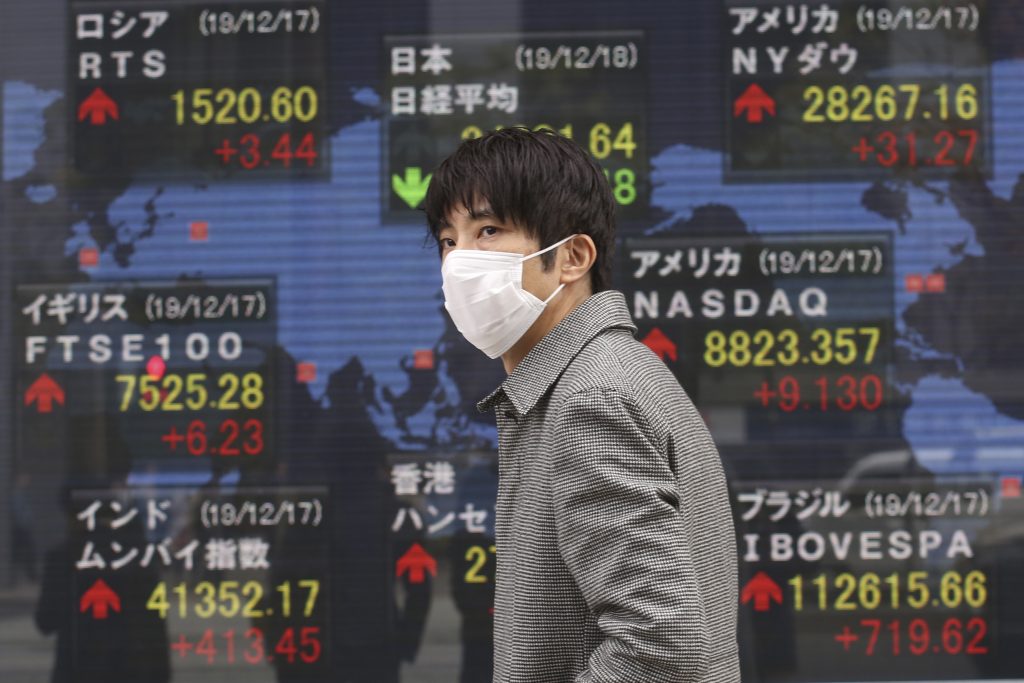 The S&P 500 had its fifth gain in a row, adding less than 0.1% to 3,192.52. With less than three weeks left in 2019, the index is up 27.4% for the year. The benchmark index and the Nasdaq closed at new highs for the fourth straight day. The Dow Jones Industrial Average also closed at a record high, its second milestone this week.

A Federal Reserve meeting last week also spurred buying after investors saw signals from Chairman Jerome Powell that interest rates will stay low for a while.

“A lot of the strength that we’re seeing is just a continuation of the ‘Phase 1’ U.S.-China deal from last week and some potential clarity around Brexit,” said Jamie Lavin, global investment specialist at J.P. Morgan Private Bank.

Japan reported that its exports fell nearly 8% in November from a year earlier, while imports fell nearly 16% in fresh evidence that trade tensions in the region are taking a toll on manufacturers.

“The aftereffects of Japan’s sales tax increase, a slowdown in global trade and smoke and mirrors on the latest stimulus package continue to make their presence felt,” Jeffrey Halley of Oanda said in a commentary.

The U.S. and China agreed last week to cut tariffs on some of each others’ goods and postpone other tariff threats. The interim trade deal has helped ease a key source of uncertainty for investors heading into next year.

The latest batch of economic data also helps buttress traders’ confidence in the health of the U.S. economy. In August, fears that the U.S. was headed for recession roiled markets.

The Fed said Tuesday that industrial production and manufacturing were stronger last month than economists expected, though they are weaker than a year ago. Industrial production rebounded to 1.1% growth in November from October, better than the 0.8% that the market was expecting. But it remains 0.8% below year-ago levels.

U.S. housing data were also stronger than expected. Homebuilders broke ground on 3.2% more homes in November than October, well above the 1.2% growth that economists had projected. In addition, applications for building permits jumped to the highest level in 12 years.