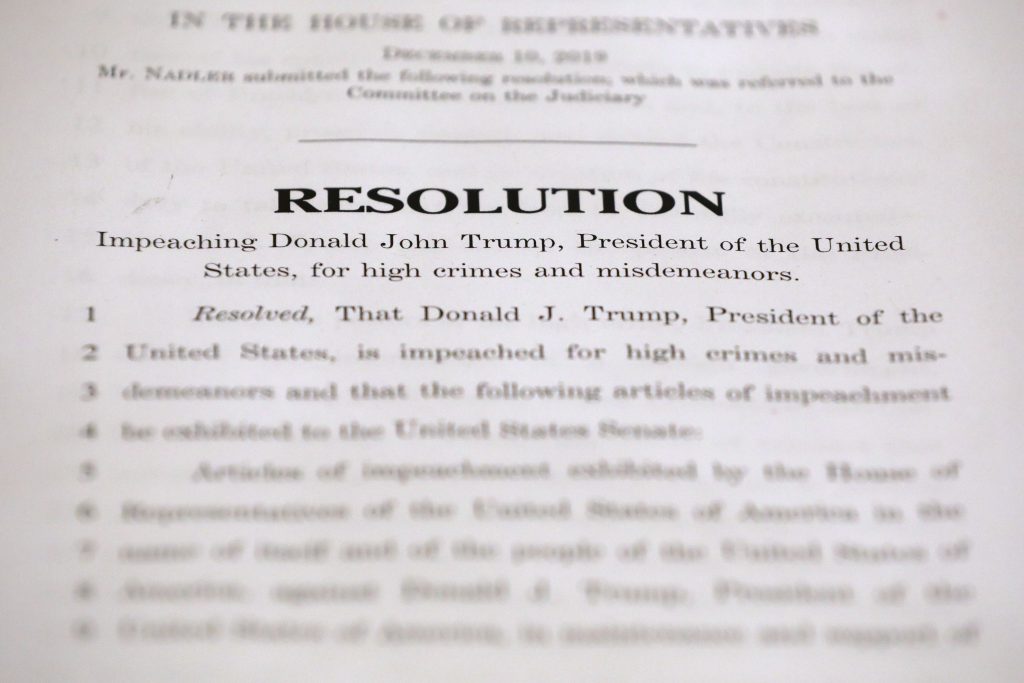 House Democrats are nearing one of the most important decisions in their effort to impeach Donald Trump: Who will bear the historic duty of prosecuting the president in next year’s Senate trial.

With the House planning to vote Wednesday on two articles of impeachment against the president, Democratic leaders including Speaker Nancy Pelosi must quickly settle on a team of so-called managers to present the case against Trump.

Intelligence Chairman Adam Schiff, who led the House investigation into Trump’s dealing with Ukraine, and Judiciary Chairman Jerrold Nadler, whose committee drew up the articles of impeachment, are expected to be named by Pelosi to the trial managers team, according to people familiar with the deliberations.

The makeup of the team will influence the tone of the trial and, ultimately, help set the impression of the Democratic drive toward impeachment for voters as the 2020 election to determine control of the White House and Congress draws closer.

The managers are likely to be formally named Wednesday, the day the lawmakers will vote on the two articles charging Trump with abuse of power and obstruction of Congress.

Members of the Judiciary Committee have been pushing to draw the impeachment managers exclusively from their panel — as was done by Republicans in the 1998 impeachment of Democratic President Bill Clinton. But multiple House Democratic officials said the group would include members of Schiff’s Intelligence panel.

Those selected will effectively become the faces of Trump’s impeachment for the Democratic Party and prominent targets for the president and his Republican allies.

That is especially true for Schiff. He’s been a particular focus of Trump’s wrath on Twitter and elsewhere.

Trump and some House Republicans have said Schiff should be called as a witness during the Senate trial over his staff’s interaction with the government whistle-blower who raised alarms over Trump’s phone call with Ukrainian President Volodymyr Zelenskiy.

“The fact that the whistle-blower did have contact with my staff doesn’t make me a fact witness,” Schiff said on the Fox News program. But he added that some Republican members of Congress, having discussed the withholding of aid to Ukraine with Trump, could be considered witnesses, but during the House investigation, “We didn’t seek to call them. We’re not seeking to make a circus out of this.”

Senate Judiciary Chairman Lindsey Graham, a Trump ally, initially said he might call Schiff as a witness, but more recently has said he isn’t interested in demanding that other lawmakers testify. Fifty-one votes would be needed in the Senate to call any witnesses, and Graham along with other GOP senators have been saying they favor limiting the witness list and bringing the trial to a rapid conclusion.

“This thing will come to the Senate, and it will die quickly, and I will do everything I can to make it die quickly,” Graham told CNN.

Among those likely to be named to the trial managers team is California Representative Zoe Lofgren. She served on the Judiciary Committee during the Clinton impeachment hearings and was a member of the panel’s staff during the proceedings against President Richard Nixon, who resigned in 1974 before articles of impeachment advanced to the House floor.

Also said to be under consideration or having expressed interest are: Representatives Jamie Raskin of Maryland and Sheila Jackson Lee of Texas, who serve on Judiciary; Eric Swalwell of California, and Val Demings of Florida, who both serve on Judiciary and Intelligence; Jim Himes of Connecticut, a senior member of Intelligence; and Raja Krishnamoorthi of Illinois, who also serves on Intelligence.

The roster is expected to be filled out with an eye toward reflecting the diversity of the Democratic House caucus. That includes geographic diversity, though Pelosi and Democratic leaders likely won’t name lawmakers from areas where Trump is popular, given the political risk for those members.

One person not likely to be on Pelosi’s list is Michigan Representative Justin Amash, a Trump critic who left the Republican Party in July and declared himself an independent, according to one of the people.

A group of first-term Democratic lawmakers had been lobbying to name Amash to the group, arguing his presence would give impeachment a less partisan gloss. But Amash would be less inclined to hew to any Democratic strategy for managing the trial, making him a potential wild card.

Representative Steve Chabot of Ohio, who was a Republican manager during the Clinton trial, said something that anyone in the role would be keenly conscious of is, “a lot of people back home, as well as the nation, are watching. ”Former Republican Representative Bill McCollum of Florida said he and the other impeachment managers worked quickly to divide up tasks, such as preparing for witness testimony and writing summaries. Neither said they felt any direct political consequences of taking such a prominent role, though Chabot said the Clintons “took great notice on who the impeachment managers were over the years.” He said that in his case, they regularly make local appearances on behalf of his Democratic opponents and seemed, in his view, to be trying to “knock him off.”

In a coincidence of history, Schiff won his California House seat in 2000 by defeating Republican James Rogan, who was a Clinton impeachment manager and was targeted by Democrats for his high-profile and aggressive pursuit of a conviction.

Chabot said that while participating in the proceedings was among the most “notable” points of his congressional career, “impeachments in general are low points for our country.”