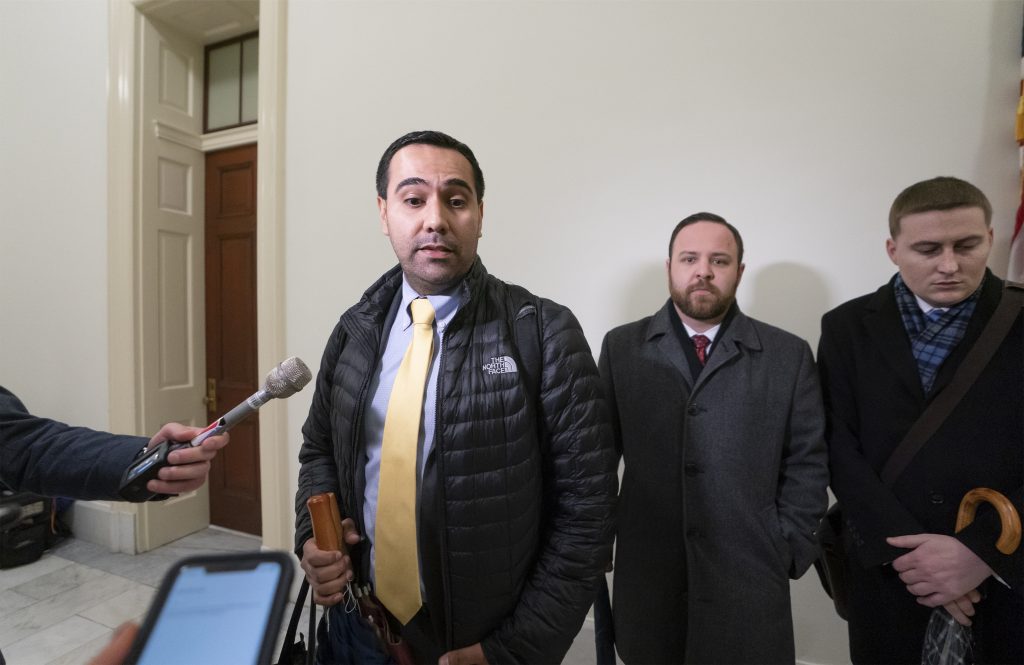 At least six senior aides working for Rep. Jeff Van Drew, a freshman Democrat from New Jersey who opposes impeachment and is expected to switch parties later this week, resigned Sunday in a mass exodus following the legislator’s impending decision to jump to the GOP.

“Sadly, Congressman Van Drew’s decision to join the ranks of the Republican Party led by Donald Trump does not align with the values we brought to this job when we joined his office,” five Washington-based staffers wrote in a letter obtained by The Washington Post.

“Defeating Trump has and always will be the main goal for me,” Doherty told the Philadelphia Inquirer. “It’s the reason I got involved in politics. I could not, in good conscience, continue working in an office where mutual morals and values were no longer present.”

The resigning staffers did not immediately return requests for comment. Van Drew’s chief of staff did not return a phone call or email late Sunday.

The upheaval comes after Van Drew, one of the Democrats’ most vocal opponents of impeachment, met privately Friday with the president at the White House. The Washington Post reported that Mr. Trump urged Van Drew to join the GOP during the meeting, as New Jersey Democrats scrambled to persuade the moderate member of the centrist Blue Dog Coalition to stay.

Van Drew and Minnesota Rep. Collin Peterson were the only House Democrats who voted against formalizing the impeachment inquiry in October, and both have said they will probably vote against impeaching the president later this week.

Leaving a major political party is a rare occurrence among sitting congressmen, but it has happened a few times in recent years. Rep. Justin Amash of Michigan left the Republican Party earlier this year after becoming “disenchanted with party politics” that he said were pushing the country into a “partisan death spiral.” Ten years ago, Rep. Parker Griffith of Alabama left the Democrats for the Republicans over disagreements with party leadership.

Van Drew has long been at odds with the majority of his party over impeachment, even as he ran for a seat that belonged to the GOP for 24 years. He won the formerly Republican seat after longtime New Jersey Rep. Frank LoBiondo retired in January. Voters in the district, which encompasses the southernmost stretch of the Jersey Shore and includes Atlantic City, have supported both Democrats and Republicans in recent presidential elections: They elected Mr. Trump by a margin of 4.6 percentage points in 2016, but also supported Barack Obama by about eight points in 2012.

Van Drew’s polling numbers have reportedly been flagging in recent months, as some of the congressman’s critics have pointed out. Rep. Jerrold Nadler (D-N.Y.), who chairs the House Judiciary Committee and last week delayed a vote on impeachment, fingered Van Drew’s disappointing internal poll numbers as the reason behind his impending decision to leave the Democrats.

“What he’s reacting to is public polling that shows he can’t get renominated,” Nadler said Sunday on ABC. “His electorate in his district is 24 percent to renominate him and 60 percent to nominate somebody else.”

The Post reported an internal survey last week that found 24 percent of respondents in Van Drew’s district said they would support him in another run, and 58 percent said they would like a new Democratic candidate for his seat.

Already, one challenger has voiced her intent to oppose Van Drew as a Democrat. Brigid Callahan Harrison, a Montclair State University political science professor who plans to run for Van Drew’s seat, slammed the sitting representative as a “traitor.”

“He may think this is a politically expedient move and that Republican voters will embrace him,” she told The Post on Saturday. “I think Republicans, Democrats and independents all recognize a traitor and value loyalty.”

If Van Drew secured an endorsement from Mr. Trump after leaving the Democrats, it could clear a path to be the GOP nominee for the seat in the next election. On Sunday, the president tweeted support for the freshman legislator.

“Wow, that would be big,” he wrote, reacting to a news story about Van Drew’s plans to become a Republican. “Always heard Jeff is very smart!”

The freshman representative previously had denied that he had plans to swap parties, and reportedly wanted to wait to announce his intention to leave the Democrats until next week. But the news leaked with the resignation of six staff members this weekend, just days ahead of the impeachment vote scheduled for Wednesday.

Democratic Congressional Campaign Committee Chairwoman Cheri Bustos said on Twitter on Sunday night that the committee would hire the staffers who quit until they could find new jobs.

“It’s right before the [end of the year] and these staffers just quit their jobs to stand up for their Democratic values,” she wrote. “We’ll bring them and others who leave on with the @dccc until they land new jobs that align with their values.”