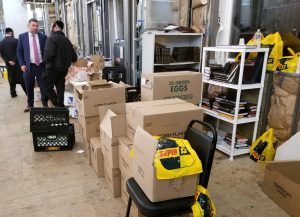 As the Jersey City Jewish community grappled with the deadly attack Tuesday on its supermarket, individuals and food companies jumped in to provide food to the community’s 100 families.

Yanki Rosenberg, a member of the Chesed Shel Emes organization who lives in Brooklyn, tells Hamodia that, realizing that Jersey City’s only kosher supermarket was inoperable, he called a community member Tuesday evening to ask if they’d need food the next morning. The community member said there was indeed a need — but it couldn’t wait that long.

“He said, ‘Not tomorrow; please send down tonight, everyone is panicking already, we don’t know what we will do,’” recalls Rosenberg.

Rosenberg sent a message to his contacts seeking an available truck or van. Once a vehicle and volunteer driver were arranged, the first stop was Bais Esther Hall in Boro Park, where Rosenberg himself does the catering; he donated much of his stock of produce, juice and milk. He also ordered 100 loaves of bread from a bakery wholesaler.

“I called Mehadrin, which has a Jersey warehouse,” says Rosenberg,” “ and they told me, ‘Whatever you want, come and take free of charge.’”

Other stores, including several in Williamsburg, provided items as well.

It was 9:45 p.m. when the loaded truck arrived at Jersey City, just in time for Maariv at the new beis medrash. (The town’s older beis medrash, next door to the supermarkets, was still on lockdown). Chesed Shel Emes helped unload the truck and distribute the food to the appreciative residents.

There was one less concern for a grieving community. 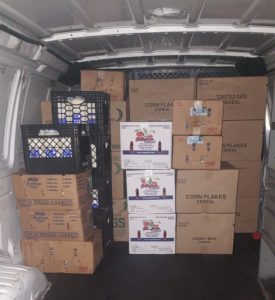 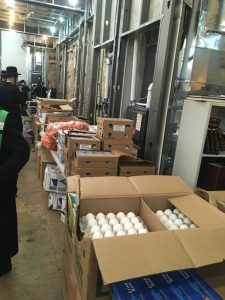