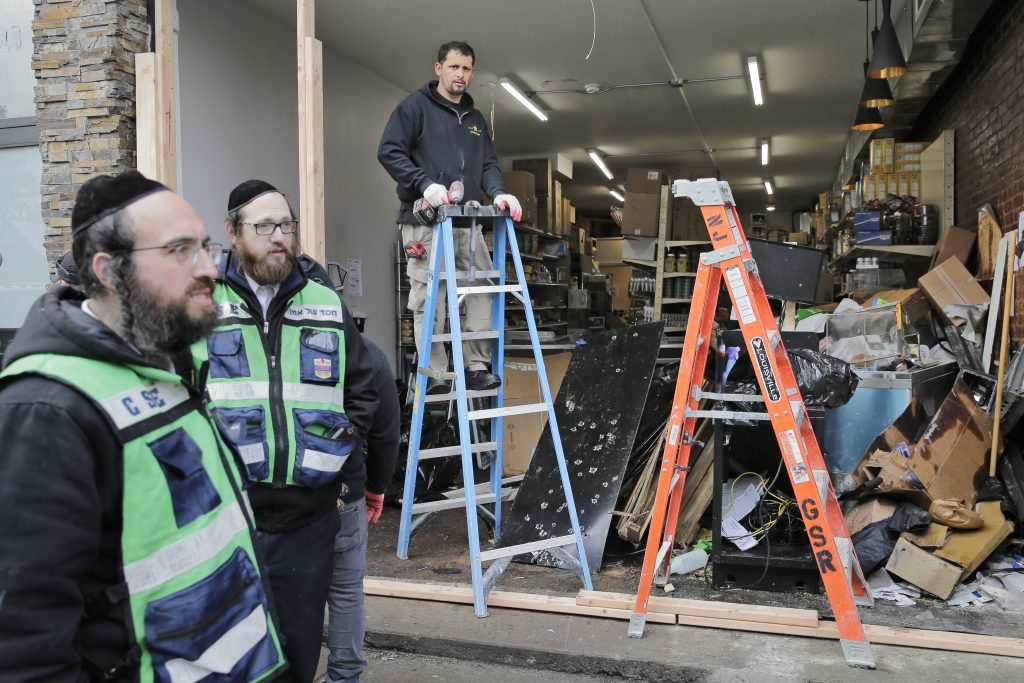 The man and woman who stormed a Jewish market in a deadly shooting in Jersey City clearly targeted the place, the mayor said Wednesday, amid growing fears the bloodshed was an anti-Semitic attack.

New Jersey Attorney General Gurbil Grewal, though, cautioned that the motive for the attack that left six people dead Tuesday was still under investigation. The two assailants were killed along with three people inside the kosher market and a police officer in an hours-long gun battle and standoff that began at a cemetery.

“As we speak, we are working to learn more about the shooters’ motivations and whether others may be involved,” Grewal said.

The killers were identified as David N. Anderson, 47, and Francine Graham, 50 — both of them also suspects in the slaying of an Uber driver found dead in the trunk of a car in nearby Bayonne over the weekend, Grewal said.

Authorities are investigating potential connections between the attackers and the Black Hebrew Israelite movement, some of whose members are known to rail against whites and Jews, a law-enforcement official familiar with the case said. Investigators also are scouring social media postings of at least one of the gunmen in search of a motive, said the official, who spoke on condition of anonymity because the investigation is still going on.

The shooting in the city of 270,000 people across the Hudson River from New York City began at a graveyard, where Detective Joseph Seals, a 40-year-old member of a unit devoted to taking illegal guns off the street, was gunned down by the assailants, authorities said. The killers then drove a stolen rental van about a mile to the kosher market.

Grewal said that within seconds of pulling up to the market, Anderson got out with a rifle and immediately began shooting, and Graham followed him into the store. He would not say whether Graham had a weapon.

Mayor Steven Fulop noted that surveillance video of the van showed the assailants driving slowly through the city’s streets and then stopping outside the grocery, where they calmly got out of their van and promptly opened fire.

“There were multiple other people on the street, so there were many other targets available to them that they bypassed to attack that place, so it was clear that was their target and they intended to harm people inside,” the mayor said of the attackers.

But Fulop cautioned: “I didn’t use the word ‘anti-Semitic.’ Anything else is open for investigation.”

The drawn-out battle with police filled the streets with the sound of high-powered rifle fire and turned the city into what looked like a war zone, with SWAT officers in full tactical gear swarming the neighborhood.

Five bodies were found at the store: the killers and three people who were inside at the time. Police said they were confident the bystanders were shot by the gunmen and not by police.

Two of the victims at the store were identified by members of the Orthodox Jewish community as Mindel Ferencz, 31, who with her husband owned the grocery, and 24-year-old Moshe Deutsch, a Yeshivah student from Brooklyn who was shopping there. The Ferencz family had moved to Jersey City from Brooklyn. The third victim was identified by authorities as Miguel Douglas, 49.

A fourth person managed to escape from the store, Grewal said.

Jewish leaders and the Anti-Defamation League, which tracks anti-Semitic attacks, expressed concern about the deaths.

“The report from the Jersey City mayor saying it was a targeted attack makes us incredibly concerned in the Jewish community,” said ADL regional director Evan Bernstein. “They want answers. They demand answers. If this was truly a targeted killing of Jews, then we need to know that right away, and there needs to be the pushing back on this at the highest levels possible.”

New York Mayor Bill de Blasio said on MSNBC that the attack was “clearly a hate crime,” while New York Gov. Andrew Cuomo pronounced it a “deliberate attack on the Jewish community.” They announced tighter police protection of synagogues and other Jewish establishments in New York as a precaution.

In the deadliest attack on Jews in U.S. history, 11 people were killed in an October 2018 shooting at a congregation in Pittsburgh. Last April, a gunman opened fire at a synagogue north of San Diego, killing a woman and wounding a rabbi and two others.

The kosher grocery is a central fixture in a growing community of Orthodox Jews who have been moving to Jersey City in recent years and settling in what was a mostly black section of Jersey City, causing some resentment.

Mordechai Rubin, a member of the local Jewish emergency medical services, said the small Jewish community has grown over the past three or four years, made up mostly of people from Brooklyn seeking a “nicer, quieter” and more affordable place to live. Next to the store is a synagogue with a school and day care center where 40 students were present at the time of the shooting, he said.

“It’s unfortunate what happened, but we don’t even want to think about what would have happened if they made their way up to the day care or to the synagogue,” he said.