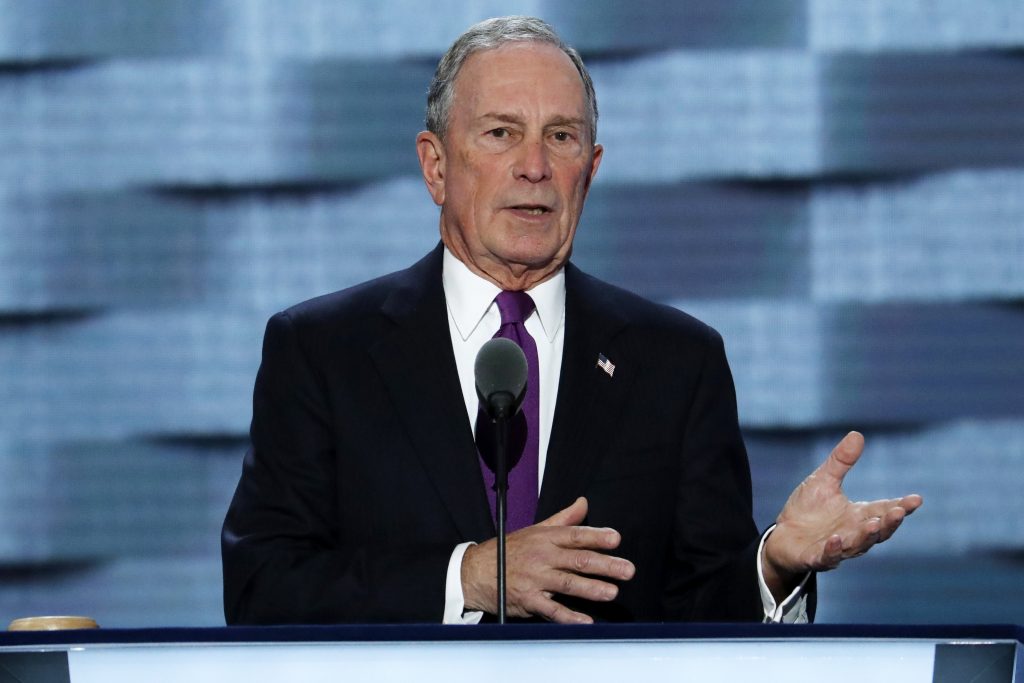 A Monmouth University poll found about twice as many registered voters rated Bloomberg negatively as positively — 54% unfavorable, 26% favorable. That margin was significantly worse than for five other Democratic candidates, as well as for President Trump. That same measure hampered Hillary Clinton’s campaign in 2016.

Bloomberg garnered 5% support nationally for the Democratic nomination, narrowly higher than some other recent polls. He was in fifth place behind former vice president Joe Biden (26%) and Sens. Bernie Sanders of Vermont (21%) and Elizabeth Warren of Massachusetts (17%). Bloomberg’s support is within the margin of error of South Bend, Indiana, Mayor Pete Buttigieg at 8%, Sen. Amy Klobuchar of Minnesota at 4%, businessman Andrew Yang at 3% and Sen. Corey Booker of New Jersey at 2%.

Yet the negative favorability ratings are a sign Bloomberg may struggle to grow his support among both Democrats and the broader electorate. Since its launch last month, his campaign has spent more money on ads than all the top-polling Democrats combined and is simultaneously building out ground operations in 27 states.

“Bloomberg said he got into this race because he wants to defeat Trump, but his campaign kicks off with even lower ratings than the incumbent,” said Monmouth polling director Patrick Murray. “That is not the most auspicious start, but views of Bloomberg are not as deeply held as they are for Trump, so he has room to shift those opinions,”

Buttigieg fared slightly better on this question with minus-1 net favorability (34% favorable vs. 35% unfavorable), as did Yang at minus-3 (25% favorable vs. 28% unfavorable). Both Buttigieg and Yang are less well-known, with more than one-third of voters saying they haven’t heard of them or have no opinion.

Democratic voters are roughly split in their views of Bloomberg, with 40% favorable and 39% unfavorable, while all six other Democratic candidates tested in the Monmouth poll are rated more positively than negatively. Warren’s net favorable-unfavorable rating is plus 61 among Democratic voters, with Biden at plus 56, Sanders at plus 53, Buttigieg at plus 5 and Yang at plus 25.

President Trump’s favorable rating was narrowly negative in the Monmouth poll, with 46% of all registered voters favorable and 52% unfavorable. The result is more positive than some other recent national polls, which have shown negative favorable ratings of Trump outpacing positive ones by double digits.

The Economist-YouGov poll found 30% of Democratic voters saying they would be “disappointed” if Bloomberg became the Democratic nominee. That was higher than any candidate but author Marianne Williamson at 37% and Rep. Tulsi Gabbard, D-Hawaii, at 36%. Almost a quarter of Democrats said they would be disappointed if Biden became the nominee, only slightly less than Bloomberg’s share.