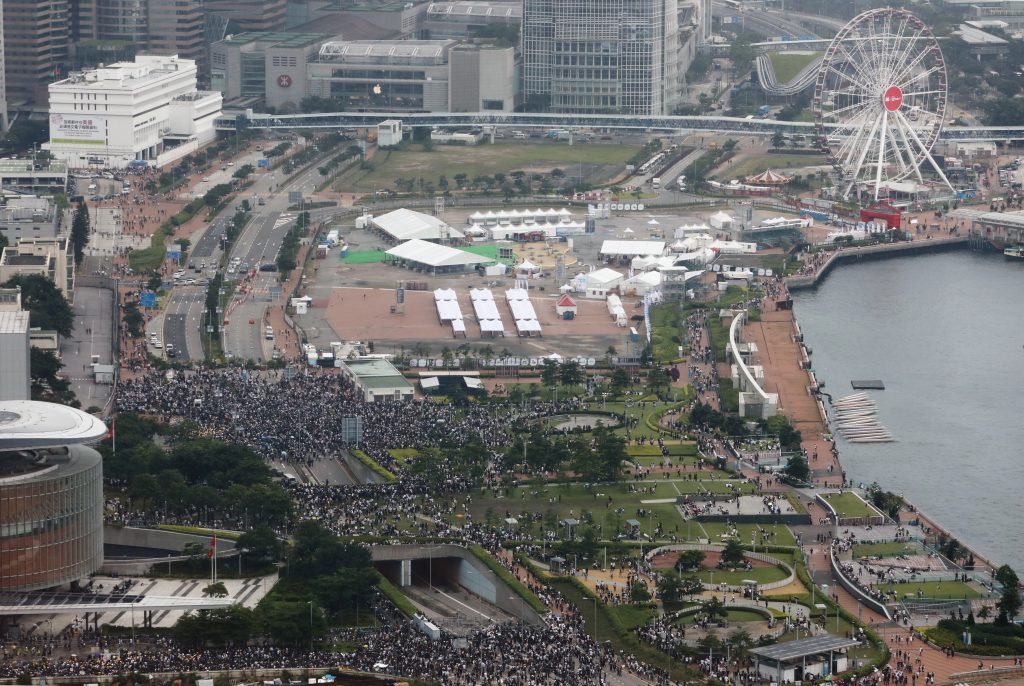 Thousands of people took to the streets of Hong Kong on Sunday in a march seen as a test of the enduring appeal of an anti-government movement about to mark a half-year of demonstrations.

Chanting “Fight for freedom” and “Stand with Hong Kong,” a sea of protesters formed a huge human snake winding through the Causeway Bay shopping district. The protest ground to a standstill at times, with thousands of marchers crammed into the narrow streets, their cries of “Revolution in our times” echoing off the high-rise towers.

Many held up five fingers to press their five demands, which include democratic elections for Hong Kong’s leader and legislature.

The huge turnout was reminiscent of marches in the first two months of the movement that drew hundreds of thousands of people, and upward of a million by organizer estimates. Police banned the mass marches as the protests turned increasingly violent, but relented and allowed Sunday’s march after a few weeks of relative peace.

Police in riot gear deployed in numbers on the edges of the march. Earlier in the day, they arrested 11 people and seized a cache of weapons, including a firearm with more than 100 bullets. Police said that the arrested apparently planned to use the weapons during the protest to frame police, who have been accused of using excessive force against the protesters.

Rally organizer Eric Lai called on the police to exercise self-restraint and not fire tear gas. Authorities, who have used tear gas, water cannons and rubber bullets at previous demonstrations, say the force has been necessary to disperse protesters blocking streets, vandalizing shops and throwing homemade gasoline bombs at them.

The rally was called by the Civil Human Rights Front, a group that has organized some of the biggest demonstrations since hundreds of thousands of protesters first marched on June 9 against now-withdrawn government proposals that would have allowed criminal suspects to be sent for trial in Communist Party-controlled courts in mainland China.

“We hope this will be a signature for our movement after six months to show to [Hong Kong leader] Carrie Lam as well as to the world that people are not giving up, people will still fight for our freedom and democracy,” Lai said as protesters gathered at Victoria Park for the march.

The movement has snowballed into a sustained challenge to the government of the semi-autonomous Chinese territory and communist leaders in Beijing. The five demands also include an investigation into police use of force against the protesters.

“They are out of control,” said Ernest Yau, a 28-year-old consultant.