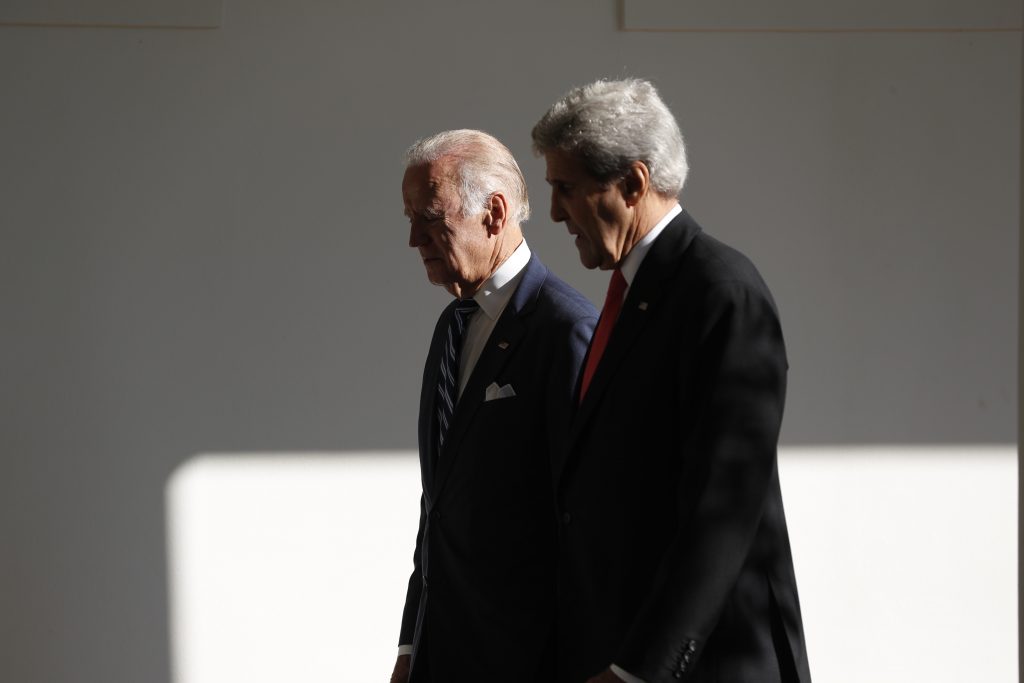 John Kerry, the former secretary of state and 2004 Democratic presidential nominee, endorsed Joe Biden for president on Thursday, buoying the former vice president’s argument that his international experience should be a deciding factor for voters in 2020.

“I’ve never before seen the world more in need of someone who on day one can begin the incredibly hard work of putting back together the world Donald Trump has smashed apart,” Kerry said in a statement.

The Biden campaign rolled out Kerry’s endorsement as it continued to portray Trump as a dangerous and erratic commander in chief and head of state. The campaign amplified its argument with an online ad featuring video of other world leaders mocking Trump at a Buckingham Palace reception held alongside the NATO summit this week.

“Did you ever think you’d see that?” Biden asked.

Yet before Biden could bolster his argument by celebrating Kerry’s high-profile endorsement, he demonstrated that foreign affairs isn’t a seamless issue for his candidacy. That came during a tense exchange with a voter in New Hampton.

Biden reacted testily and then grew angry at his campaign town hall when an 83-year-old retired farmer queried the candidate about his son Hunter Biden accepting a lucrative post on the board of a Ukrainian energy company while Biden handled U.S.-Ukraine relations as vice president. The issue is near the heart of House impeachment proceedings against Trump after disclosures that the president sought Ukraine’s help in investigating the Bidens. Ukraine officials have said there was nothing illegal about Hunter Biden’s business dealings.

The voter, who declined to give his name, pressed Biden on why it was acceptable for Hunter Biden to capitalize on his father’s power while Democrats assail Trump for self-dealing.

“You’re a … liar, man, that’s not true,” Biden boomed as the man continued to argue that “You don’t have a backbone … any more than Trump.” When the man finally told Biden he wouldn’t vote for him, Biden replied, “I knew you weren’t voting for me.”

Biden drew applause during the exchange from other attendees, a point the candidate noted afterward to reporters. “I didn’t lose my temper,” he said. “What I wanted to do was shut this down. You saw the reaction here.”

He added that he knows Trump would continue to push the matter in a general election campaign that promises “to be even meaner.”

Biden has touched on Trump’s belligerent style on the world stage repeatedly this week as he travels across Iowa, whose Feb. 3 caucuses open Democrats’ 2020 voting.

“Foreign policy is a major issue” for voters he encounters, Biden said in an interview. “It’s not an issue that they say, well … I think we should take this number of troops out of there and that number of troops there and I’m worried about what’s going on in Ukraine,” he said. “They just know something’s not right. It’s uncomfortable. They know.”

He added that he not only has a better demeanor for the job than Trump, but he also has more relevant experience, deeper knowledge and more extensive relationships abroad than his Democratic competitors. “It’s not in their wheelhouse,” Biden said. “I mean, it doesn’t mean they can’t learn it, doesn’t mean they’re not smart ….”

Biden believes that international experience — with his six terms as a Delaware senator and two terms as vice president — is a winner for him in a primary and potential general election.