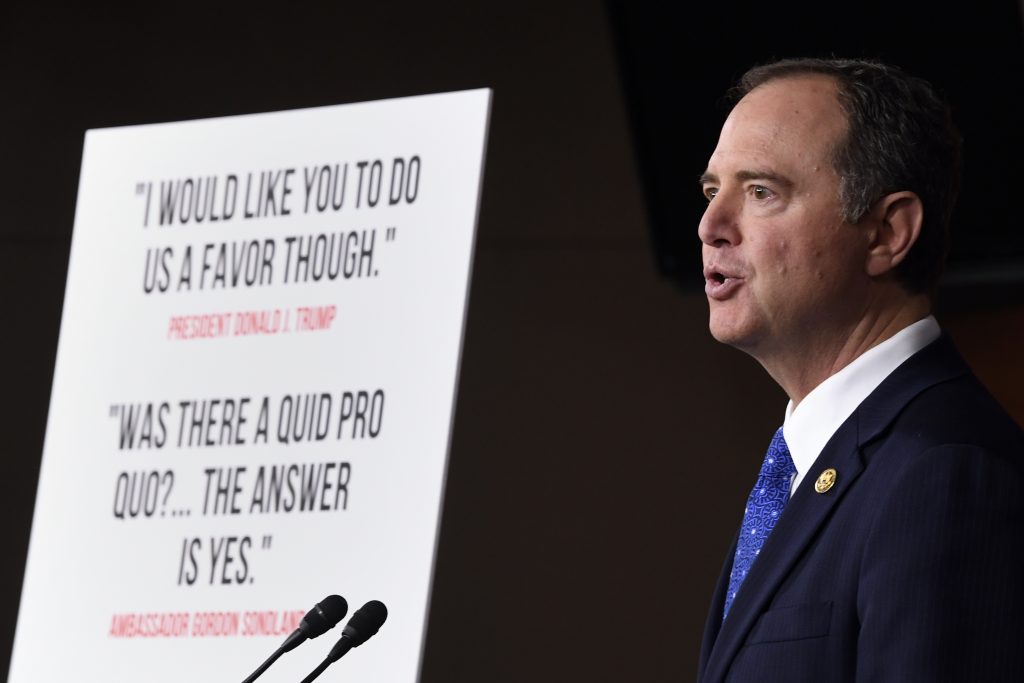 According to multiple Democratic lawmakers who attended a closed-door Capitol meeting, Pelosi announced no firm decision or timeline in moving toward Trump’s impeachment. But, a day after Schiff delivered a 300-page report detailing charges of abuse of power and obstruction of Congress against Trump, she made clear what lay ahead in the House.

“Are you ready?” Pelosi, D-Calif., asked her colleagues, after describing the grave constitutional circumstances posed by Trump’s alleged wrongdoing surrounding his dealings with Ukraine and his subsequent decision to stonewall the House investigation into it.

The caucus, according to multiple members, erupted with shouts of approval.

“We’re moving forward,” said one member, summarizing the thrust of Pelosi’s remarks and speaking on condition of anonymity to candidly describe a private meeting. “We’ve got a job to do whether people want to testify or not.”

Pelosi then turned the room over to Schiff, D-Calif., who received a standing ovation before saying a word, the members said.

Schiff proceeded to run through the major findings of the report, add context to some of the key events the inquiry has uncovered, and explained to colleagues why, among other things, he did not wait for additional witnesses — such as former national security adviser John Bolton, who met with Trump to discuss Ukraine policy — before issuing his report.

Schiff referenced a recent New York Times editorial that encouraged Democrats to slow down and use the courts to force testimony from Bolton and others. He countered that the courts have been too slow in upholding congressional subpoenas.

“The direction we got from Chairman Schiff was, we’re not going to wait endlessly for John Bolton to decide that the country is more important than his book deal,” said Rep. Jared Huffman, D-Calif.

While some Democrats have debated the scope of what articles of impeachment ought to be adopted by the Judiciary Committee, members present said that was not an issue of discussion Wednesday morning. Instead, Pelosi said that task would be left to the House Judiciary Committee, though at least one member interpreted the two leaders’ remarks to indicate a narrower focus for the impeachment effort.

There was no mention, for instance, of Trump’s potential obstruction of justice detailed by special counsel Robert Mueller or violations of the Constitution’s emoluments clause banning a president from accepting money from foreign states, the member said.

After Schiff’s presentation, Pelosi again spoke — focusing, a senior Democratic aide said, on “the gravity and somber nature of this moment,” as well as the need for Democrats to “give room for their colleagues to reach their own conclusions as the inquiry proceeds.”

The aide spoke on the condition of anonymity to speak frankly.

“She’s very on message in reminding us that this is a somber but necessary moment — this is a situation that the founders feared, but that we can’t avoid,” Huffman said.

The meeting, which began an hour before the Judiciary Committee gaveled its first impeachment hearing to order, included an unusually high level of security. Members were not permitted to bring staffers into the room, and they were asked to check their phones at the door.

In a separate closed-door meeting elsewhere in the Capitol basement, Vice President Mike Pence rallied Republicans against impeachment — encouraging the GOP rank-and-file to “turn up the heat” on House Democrats and accuse them of focusing on impeachment instead of solving America’s problems.

Pence praised Republicans for sticking together and defending the president, telling them he and Trump were proud of their work standing up for the president. He also criticized Pelosi and House Democrats for what he called shameful behavior — not just for impeaching Trump but claiming the Democrats had turned a blind eye to other issues that affect people’s everyday lives.

“The vice president was clear that he was proud of how the House Republican have stood together on the impeachment inquiry but wanted to remind us that in our discussions back home, we need to talk about things that are not happening because House Democrats are consumed with impeaching the president,” said Rep. Steve Womack, R-Ark., pointing to legislation to curb prescription drug costs and a pending trade agreement with Canada and Mexico.

Several GOP leaders exited the meeting talking about those “opportunity costs” of impeachment.

“They are not bringing bills to the floor that the president would sign,” said House Minority Whip Steve Scalise, R-La.