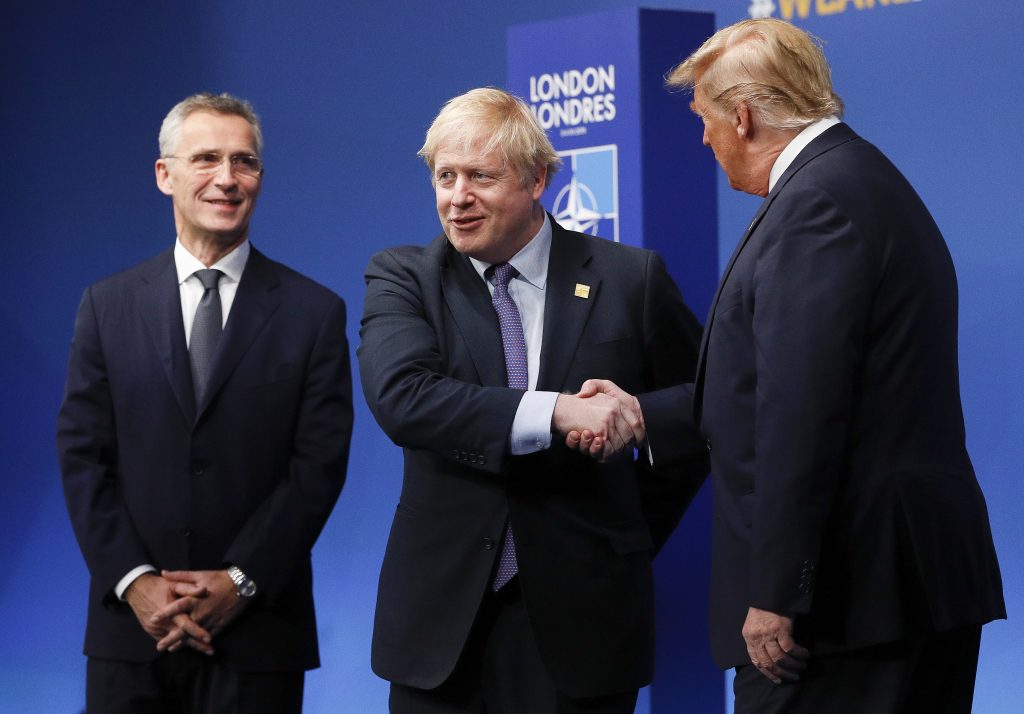 NATO leaders on Wednesday played down their differences and insisted that they remain united over security issues and determined to defend each other despite a series of spats between the presidents of some of the alliance’s biggest member countries.

Before a summit near London, French President Emmanuel Macron had lamented the “brain death” of NATO due in part to what he called a lack of U.S. leadership. President Donald Trump branded his remarks as “very disrespectful.” Turkish President Recep Tayyip Erdogan suggested that Macron himself is “brain dead.”

The infighting is mostly due to Turkey’s invasion of northern Syria. Macron has complained that Trump pulled U.S. troops out of the region without warning his NATO allies. Turkey saw the move as a greenlight to send its troops in.

“NATO is agile, NATO is active, NATO is adapting,” NATO-Secretary Jens Stoltenberg said when asked by reporters prior to the conference whether the world’s biggest security alliance is brain dead.

“As long as we are able to deliver substance… then NATO proves once again that we are able to respond to a shifting security landscape, and that’s the best way to also provide unity of this alliance,” he said before chairing the meeting at a luxury hotel and golf resort.

Summit host Prime Minister Boris Johnson — also busy with a divisive British election campaign — said “clearly it is very important that the alliance stays together, but there is far, far more that unites us than divides us.”

Johnson said NATO’s success is due to “the very simple concept of safety in numbers. At the heart of it is a pledge that we will come to one another’s defence: all for one and one for all.”

Erdogan didn’t speak to waiting media. Trump arrived via a different entrance, away from media. The two leaders were reported to have a productive one-to-one meeting earlier in the day.

Macron, however, refused to apologize for his remarks, saying they had ignited a debate at NATO about important strategic issues.

“It’s allowed us to raise fundamental debates,” he said, chief among them being “how to build sustainable peace in Europe.”

He said NATO “debates should be about other things than budgets and finances.”

Stoltenberg noted that European allies and Canada have added $130 billion to their defense spending since 2016, even as Trump has complained that they are too slow to boost their military budgets.

“This is unprecedented, this is making us stronger,” Stoltenberg said of the spending effort.

After Russia annexed the Crimean Peninsula in 2014, NATO countries halted their post-Cold War spending cuts and began increasing spending. They pledged to “move toward” spending 2% of their annual GDP on national defense by 2024.

Trump said Tuesday that much more needs to be done.

“You could make the case that they’ve been delinquent for 25-30 years,” Trump said. The figure of 2%, he added, “is a very low number, it really should be four.”

Luxembourg Prime Minister Xavier Bettel conceded that “we have experienced easier times. But we’re allies after all and we’re going to speak about everything.”

“The atmosphere last night was much more relaxed than what I expected after hearing what had happened over the last 24 hours. But I think differences can arise. We just have to talk about them,” Bettel said, referring to receptions late Tuesday at Buckingham Palace and at Downing Street.

After a working session of a few hours on Wednesday, the leaders of the 29-nation trans-Atlantic alliance are due to publish a declaration underlining their commitment to NATO on its 70th birthday, and to show that the alliance is adapting to modern threats and potential new adversaries like China.