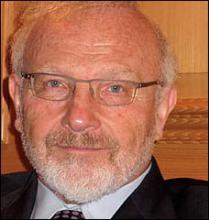 Allan Gerson, a lawyer who pursued Nazi war criminals and pioneered the practice of suing foreign governments in U.S. courts for complicity to terrorism has died at the age of 74.

Gerson died Sunday at his home in Washington, D.C., from complications of the degenerative brain disorder Creutzfeldt-Jakob disease, his wife, author Joan Nathan, said, according to The Washington Post.

Gerson wrote an opinion piece for the newspaper in 2017 in which he detailed his lengthy legal career and identified himself as a former “dreamer,” drawing a parallel between his undocumented entry into the United States and those of immigrants currently targeted by the Trump administration.

A deputy assistant attorney general under President Ronald Reagan, Gerson was also a child of Jewish refugees who fled Poland during the Holocaust.

His father had been a bookkeeper at a family candy store, and his mother was a dressmaker. They spent part of World War II in Siberian labor camps. Gerson was born in Samarkand in June 1945. After the war, the family adopted false identities to secure U.S. immigration visas.

“My parents had a visa for admission into the United States that was issued in the displaced-persons camp in Germany where they had found shelter under U.S. and U.N. auspices after the war,” he wrote. “Trouble was, the visa wasn’t their own. It belonged to a family that had obtained it but then decided to immigrate elsewhere instead.”

He and his family lived under fake identities for years, he said, until he was about 13 and a “sympathetic judge” allowed the family to obtain citizenship under their real names.

“We were fortunate. It didn’t have to turn out that way,” he wrote, noting that continuing to conceal his identity would have made him vulnerable to deportation even decades later, as immigration law has no statute of limitations.

“That is why I identify with the dreamers of today, who stand to be deprived of life as they know it, shipped off to some land they hardly recognize,” he said. “But for dint of circumstance, I might be in their boots.”

Gerson and earned degrees from the University at Buffalo in New York, New York University, the Hebrew University of Jerusalem and Yale University.

As a Justice Department trial lawyer, Gerson pursued Nazi war criminals who immigrated to the United States. He later became senior counsel to two U.S. ambassadors to the United Nations and advocated for the victims of the bombing of Pan Am Flight 103, which remains the deadliest terrorist attack in British history. The flight exploded over Lockerbie, Scotland, in 1988, killing all 259 passengers and crewmembers, along with 11 people on the ground.

He later was part of a team representing many families of those killed in the Sept. 11, 2001 terrorist attacks. He also wrote several books on international law and taught at George Mason University.

He’s survived by his wife and relatives including his three children, a brother and two grandchildren.