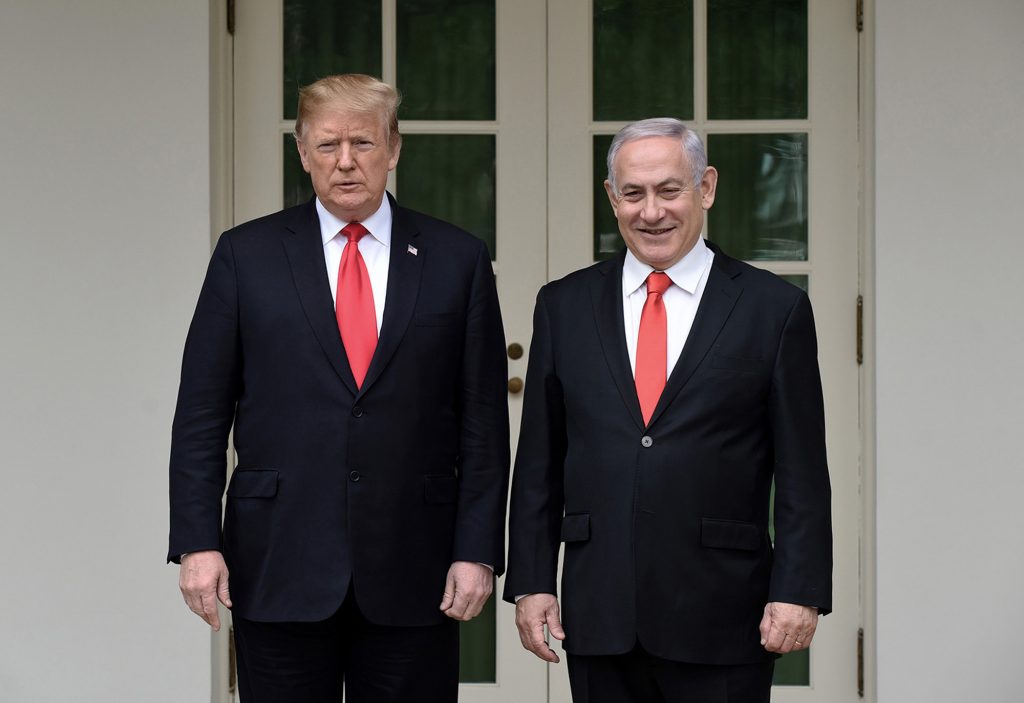 For Israel hard-liners, President Donald Trump has been the gift that keeps on giving.

In his first term, Trump recognized Yerushalayim as the capital of Israel and moved the U.S. Embassy there, reversed a long-standing U.S. position on the legitimacy of Israeli settlements in Yehudah and Shomron and accepted Israel’s annexation of the Golan Heights.

But there is growing pressure on Trump to do even more.

As the president prepares to return to South Florida this weekend to give a speech before an Israeli-American group funded by one of his biggest campaign supporters, a push is building for Trump to support an Israeli annexation of the Jordan Valley.

That move would jolt an international community already fearful the two-state solution to the Israeli-Palestinian conflict is on life support, if not already dead. The Jordan Valley constitutes roughly 30% of Yehudah and Shomron, and Israel’s annexation would further gut Palestinian hopes for a viable, independent state.

“It is certainly unprecedented. The United States has never given Israel a green light to annex territory in [Yehudah and Shomron], nor has an Israeli prime minister asked a president for it,” said Michael Koplow, policy director at the Israel Policy Forum. “It would be pretty devastating to the prospects of a two-state solution — it makes any future Palestinian state completely encircled by Israel.”

Israeli Prime Minister Benjamin Netanyahu told reporters in Ashkelon Monday that he had spoken on the phone with Trump the previous day about a defense pact with the United States and recognizing the Jordan Valley — a buffer zone between Jordan and Yehudah and Shomron — as the eastern border of Israel.

Netanyahu had promised in September to annex the valley if he won an upcoming election. He ultimately lost and has since been indicted on bribery and fraud charges, further jeopardizing his hold on power.

Two consecutive efforts to form a unity government have failed, leaving Netanyahu in office for now. According to a report published Monday in a right-wing Israeli newspaper, Israel Hayom, a rotational agreement proposed by Netanyahu would have him remain as prime minister for six months in order to pursue an annexation plan with Washington.

The paper is owned by Sheldon and Miriam Adelson, the biggest megadonors in Republican politics and also the largest contributors to the Israeli-American Council, the organization hosting Trump on Saturday. The couple, by their own math at last year’s IAC summit, have donated or pledged at least $76 million to the organization.

The IAC, which says it is apolitical, declined to comment, and representatives for the Adelsons did not respond to requests for comment.

Another organization with support from the Adelsons, the Republican Jewish Coalition, told McClatchy that it supports Netanyahu’s effort to initiate talks with Trump over annexation. “We do,” said a spokesman for the RJC. “Israel needs secure borders, and the only way Israel has been able to achieve that is via control of the hills of the Jordan Valley.”

The White House declined to comment. A senior administration official told McClatchy not to expect any significant policy announcements out of Trump’s Dec. 7 appearance at the IAC’s annual summit in Hollywood, Fla.

But the White House has not denied that Trump and Netanyahu in their Sunday phone call discussed “opportunities” for further policy cooperation, including potential action with respect to the Jordan Valley.

“The right and the left have always said they can never dream of giving away the Jordan Valley,” Mort Klein, president of the Zionist Organization of America and a supporter of the president’s policies, said in an interview. “Publicly acknowledging that reality would be significant.”

Consecutive Israeli governments have argued that maintaining a security presence in the low-lying Jordan Valley is a strategic imperative, especially in light of Syria’s collapse into civil war, the rise of Islamic State and the growth of Iran’s military presence across the region.

Palestinian leaders argue that Israeli annexation of the valley would further deteriorate the viability of a Palestinian state in Yehudah and Shomron, which is already riddled with Israeli settler communities.