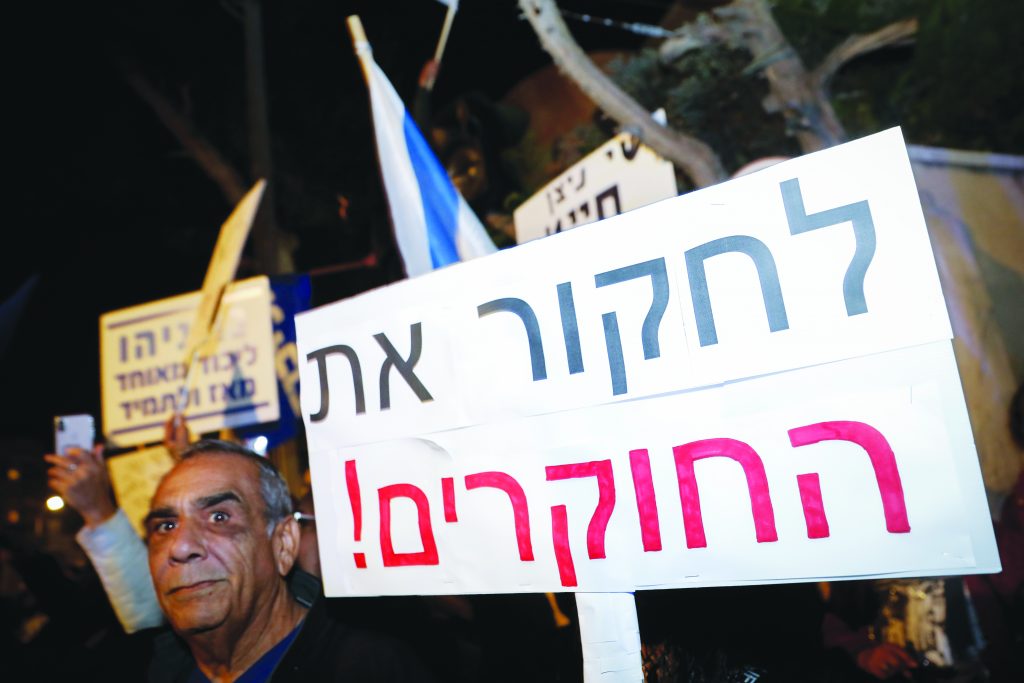 The huge demonstration held last week in Tel Aviv in support of Prime Minister Binyamin Netanyahu against the legal system in Israel once again brought to the fore the polarization in Israel between the different camps and blocs, right versus left. At the same time, the ultimate question is also being raised: What is the chareidi stance? Right or left?

In distant history, with the establishment of Zionism and its transformation into a movement purporting to represent the entire Jewish nation, especially once the subject of establishing a “national home” for the Jewish nation was promoted, Agudas Yisroel stood at the side and did not take part in the Zionist organization. Its heretical spirit and its nationalistic demands contravened the principles of the Agudas Yisroel movement.

Many discussions were held at Agudas Yisroel conventions prior to the Holocaust in an effort to clarify and formulate the movement’s position with regard to the up-and-coming Jewish state. Would Agudas Yisroel recognize it; would it participate in its elections; would it present policy alternatives of its own to the nations of the world?

The polarization between the rabbit-eaters on the kibbutzim (the uprooters of religion) and the chareidi sector seeking to establish for itself a home and reestablish the Torah world after the Holocaust was very sharp and clear. They stuck to their positions, and we to ours. High walls were built between the camps, the chareidim against the
left-leaning members of the kibbutzim.

Therefore, it was only natural that they would join with the right and the mahapach — turnabout — of Menachem Begin in 1977 and herald a new era. Because, besides the political revolution, it was primarily a turnabout that changed the order of the day in Israel. Begin was not only a representative of the right-wing parties, he most importantly represented a different sector entirely. No longer was the country dominated by members of the kibbutz movements; it was now in the hands of the traditional public that had brought along a spirit of respect for tradition from their eastern-region nations. Most of them kept Shabbos and some even sent their children to Torani schools.

Begin himself even observed tradition, to a point, and certainly more than his predecessors. He kept Shabbos and, even in his role as prime minister, sought to refrain as much as possible from desecrating it. In a certain sense, Binyamin Netanyahu continued this revolution and this approach. He knew how to speak to the chareidi ear, and the most famous of his whispers was, “The left has forgotten what it is to be Jews.”

The demonstration last week indicated that the right-wing sector, as well as the chareidi sector, has a mutual enemy: the legal system and the prosecutors.

For years, the chareidi sector has seen itself discriminated against in the High Court and in every other legal channel. At every hearing — the chareidim will always have the disadvantage. It is not for naught that we turned out in tens of thousands for a massive demonstration against the High Court, which has taken upon itself excessive authority. Today, the public in Israel is learning this the hard way.

The chareidim owe Netanyahu a debt of gratitude not only because of his right-wing views (if they are even such). They are less interested in his political leanings and more interested in the personal friendship of many years and the recognition he has given the Torah and yeshivah world. Today, there isn’t really a genuine dialogue of left and right between the sectors.

Many have tried to claim that the chareidi sector is right-wing, but that’s not accurate at all. The chareidi sector has different parameters for sitting in a government, and they are not along the lines of left or right. A government that is compassionate toward them and recognizes their needs will get their votes.

The historical truth is that the chareidim did not leave the coalition because of the withdrawal from Yamit or Gush Katif, nor because of one diplomatic proposal or another. Rather, it was primarily in light of violations of their religious faith, such as the transfer of the electricity generator on Shabbos during the Ehud Barak government. What remains salient in the minds of the chareidim is the continued preservation of the Jewish character in the public sphere, and the preservation of yeshivah budgets and child allowances.

That doesn’t mean that tomorrow, the chareidim will choose the left, but at the root of the matter, they do not have a problem with the left as left, just like it did not bask in pleasure with the right as right. It is good for the right when the chareidi sector is with them, and it can be good for the left if they will be on its side. We have a different left and right: “Lo sasur min hadavar asher yagidu lecha yamin usmol,” do not deviate from what they tell you, left or right