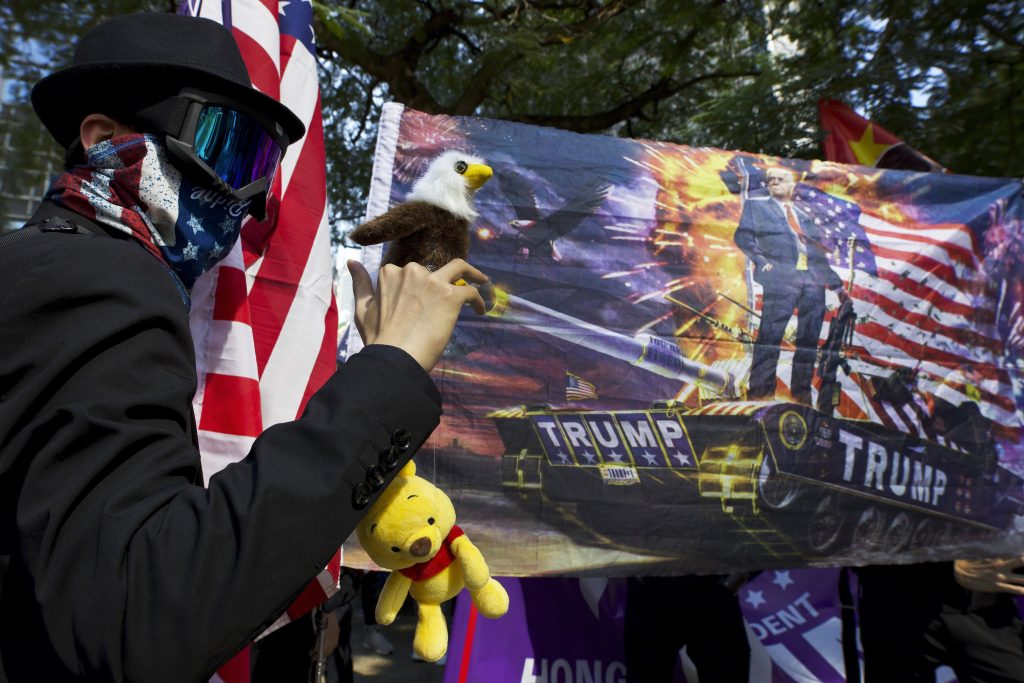 A group dressed in black and wearing masks carried American flags as it headed to the U.S. Consulate to express gratitude for legislation aimed at protecting human rights in Hong Kong that Trump signed into law last week.

Some held banners reading “President Trump, please liberate Hong Kong” and “Let’s make Hong Kong great again” — a riff on his 2016 campaign pledge to make America great again. One showed him standing atop a tank with “Trump” emblazoned on the front and side.

The marches came one week after pro-democracy candidates won a landslide victory in district-level elections. Hong Kong’s protests have been relatively peaceful for the two weeks around the election but could turn violent again if the government doesn’t bend to demands for more democracy and an investigation into police use of force against the protesters.

A peaceful crowd of about 200 adults and young children marched to government headquarters in the morning and chanted “No more tear gas.”

They leaned a pole with an American flag that flapped in the wind over a high metal gate, while the Chinese and Hong Kong flags flew on tall poles in front of the entrance.

A third march was called for late afternoon in the Tsim Sha Tsui district near Polytechnic University, the site of the last fierce clashes with police two weeks ago.

China accused the U.N. high commissioner for human rights of emboldening “radical violence” in Hong Kong by suggesting the city’s leader conduct an investigation into reports of excessive use of force by police.

She urged Lam to hold an “independent and impartial judge-led investigation” into police conduct of protests. It has been one of key demands of pro-democracy demonstrations that have roiled the territory since June.

China’s U.N. Mission in Geneva said that Bachelet’s article interferes in the internal affairs of China and exerts pressure on the city’s government and police, which “will only embolden the rioters to conduct more severe radical violence.”

It said Bachelet made “inappropriate comments” on the situation in Hong Kong and that the Chinese side had lodged a strong protest in response.

Since the unrest broke, protesters have disrupted traffic, smashed public facilities and pro-China shops, and hurled gasoline bombs in pitched battles with riot police who have responded with volleys of tear gas and water cannons.

The occupation of several universities by protesters last month after fiery clashes with police capped one of the most violent chapters in the turmoil, which has contributed to the city’s first recession in a decade.

The city has had a period of relative calm since then, though police skirmished with some protesters near Prince Edward subway station on Saturday night.

Dozens had gathered to mark three months since police stormed a subway car in Prince Edward station and hit people with batons and pepper spray.

The protesters used metal fences, cartons and bricks to block traffic in the Mongkok area in Kowloon. Most left after police fired pepper balls and issued warnings.

Lam has appealed for the current calm to continue but refused to bow to protesters’ demands, which include free elections for her post and the legislature as well as an independent probe into police conduct.

Hong Kong police have arrested 5,890 people since the protests began in June.