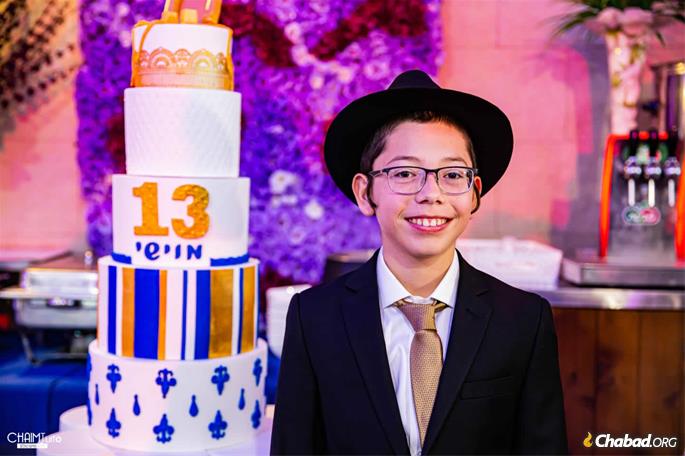 Moshe Holtzberg, orphaned in the Mumbai Chabad center massacre that took the lives of his parents 11 years ago this week, was called to the Torah for the first time in his home town of Afula, Israel on Shabbos. He celebrated his bar mitzvah Sunday evening at a gala affair in Kfar Chabad surrounded by friends and family, including the grandparents who raised him and the nanny who saved his life. More festivities were planned for Monday afternoon on the plaza of the Kosel, with more live music, dancing and further celebration. 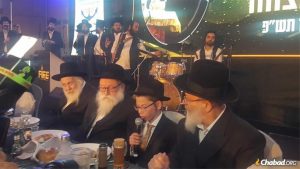 During the celebration, Moshe delivered the classic Chassidic discourse recited at Chabad bar mitzvahs, flanked by his grandparents, who were then hoisted onto the shoulders, along with Moshe, of members of the cheering crowd. Later, smiling ear to ear, Moshe danced to the musical performance of Simche Friedman and was serenaded soulfully by entertainers Motty Steinmetz and Ishay Ribo.

Later in the evening, a stirring video was played showing Moshe at the gravesites of his parents on the Har Hazeisim in Yerushalayim, voicing a pledge to them to walk in their footsteps.

Rabbi Gavriel and Rivka Holtzberg Hy’d, Chabad-Lubavitch emissaries, were murdered in terrorist attacks that swept through Mumbai beginning Nov. 26, 2008. Four of their guests at the Nariman (Chabad) House they directed were also killed in the attack. More than 170 people in all were killed in the widely publicized attacks that spanned several locations in the city.

The bullet-ridden and otherwise thoroughly ravaged multi-story Chabad institution was refurbished in their predecessors’ memory and then reopened in 2014 by Chabad-Lubavitch emissaries Rabbi Israel and Chaya Kozlovsky.

Relatives were keeping the festivities mostly private, but made a public request for pictures and stories of the many children who were named for “Gabi” and “Rivky” in the aftermath of their demise, and planned to present a bound volume to Moshe of what they receive as a bar mitzvah gift. “The organizers really appreciate participants’ cooperation and wish nachas and only joy to all,” the family said in a statement.

Moshe was in the limelight last January when he traveled to Mumbai for the first time since the terrorist attacks, accompanied by Israeli Prime Minister Benjamin Netanyahu, to help unveil a memorial exhibit honoring the Holtzbergs.

On the occasion of the milestone, India’s Prime Minister Narendra Modi sent a letter of congratulations, saying: “As you make this important transition and cross a significant landmark in the journey of life, the courage of [nanny] Sandra [Samuel] and prayers of the people of India will continue to bless you for a long, healthy and successful life.”

President Donald Trump also sent a congratulatory message, writing, “We join your family and friends in celebrating this joyous occasion, and send our best wishes as you mark this significant milestone. May your faith continue to guide, strengthen and comfort you throughout your life.”