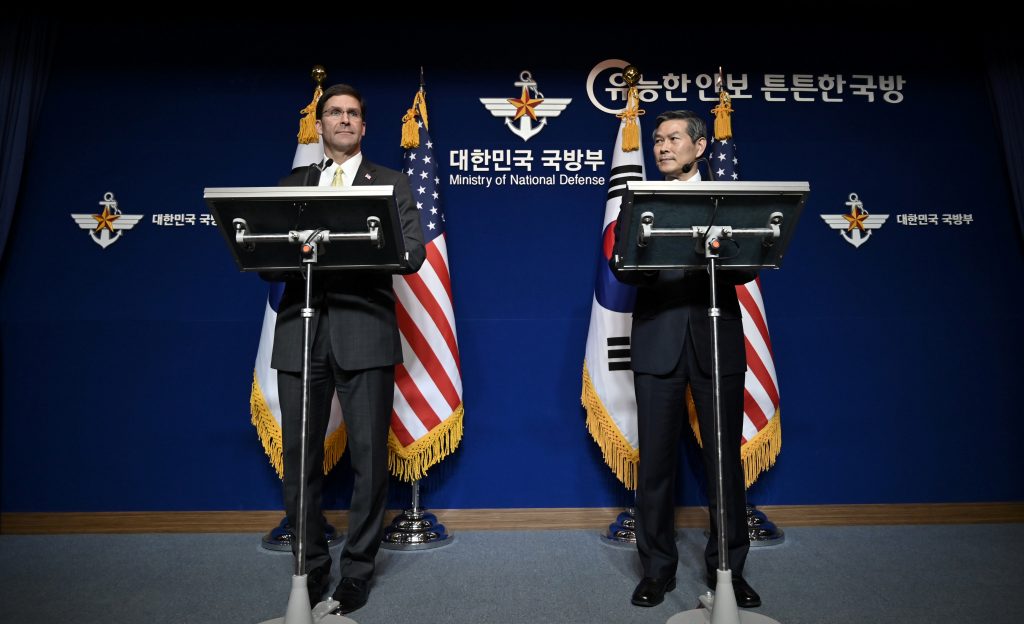 The United States on Thursday denied a South Korean news report that it was considering withdrawing up to 4,000 troops from South Korea if the latter does not pay more for maintaining a 28,500-strong U.S. contingent deterring North Korean aggression.

South Korea‘s Chosun Ilbo newspaper reported that the withdrawal of a U.S. brigade, typically 3,000 to 4,000 soldiers, had been discussed with the top brass of the U.S. military in South Korea, citing an unidentified diplomatic source in Washington.

The report came two days after the United States broke off defense cost talks after demanding that South Korea raise its annual contribution for maintaining the U.S. contingent to $5 billion, a South Korean official said, more than five times what it pays now, in rare discord in the alliance.

“There is absolutely no truth to the Chosun Ilbo report that the U.S. Department of Defense is currently considering removing any troops from the Korean Peninsula,” Pentagon spokesman Jonathan Hoffman said in a statement.

U.S. Defense Secretary Mark Esper said earlier he was not aware of any plans to withdraw troops from South Korea if cost-sharing talks failed.

“We’re not threatening allies over this. This is a negotiation,” he told reporters during a trip to Vietnam.

South Korea, which remains technically in a state of war with nuclear-armed neighbor North Korea following their 1950-53 conflict. North Korea has also developed a missile believed to be capable of firing a nuclear weapon at the U.S. mainland.

South Korea‘s Defense Ministry said the Chosun report was “not the official position of the U.S. government” while Foreign Minister Kang Kyung-wha told a parliamentary panel no cut in U.S. troops had been discussed.

The allies have for 70 years formed a buffer against North Korean aggression but their failure to agree on an increase in South Korea‘s contribution to the costs of hosting the U.S. troops has raised questions about the deployment.

President Donald Trump has insisted that South Korea pay more – and has also suggested pulling the troops out altogether.

This week, as their talks broke down, each side blamed the other for being unprepared to compromise on sharing the costs of the U.S. deployment.

Neither side had publicly confirmed the numbers being discussed but Trump has said the U.S. military presence in and around South Korea was “$5 billion worth of protection.”

U.S. law stipulates its troop presence in South Korea must not fall below 22,000 unless the secretary of defense justifies a further reduction to Congress.

U.S. Special Representative for North Korea Stephen Biegun said on Wednesday he believed the United States should have troops in South Korea, when asked if he would advocate for the presence of U.S. military personnel there if he is confirmed as deputy secretary of state.

“South Korea is among our most important alliance partners. That doesn’t mean anybody gets a free ride. We have a tough burden-sharing negotiation that we’re in the middle of with the South Koreans,” Biegun said.

South Korean political party leaders visited Washington on Wednesday to press for a fair and reasonable outcome of the cost-sharing talks.

“I stressed that a withdrawal of U.S. troops from South Korea should not be brought up, as the South Korea-U.S. alliance also helps the U.S. national interest,” said Na Kyung-won of the main opposition Liberty Korea Party.

But some South Korean activist groups are calling for a big reduction or even a withdrawal of U.S. forces.