Politics Democrats Spar at Debate Over Health Care, How to Beat Trump
Politics 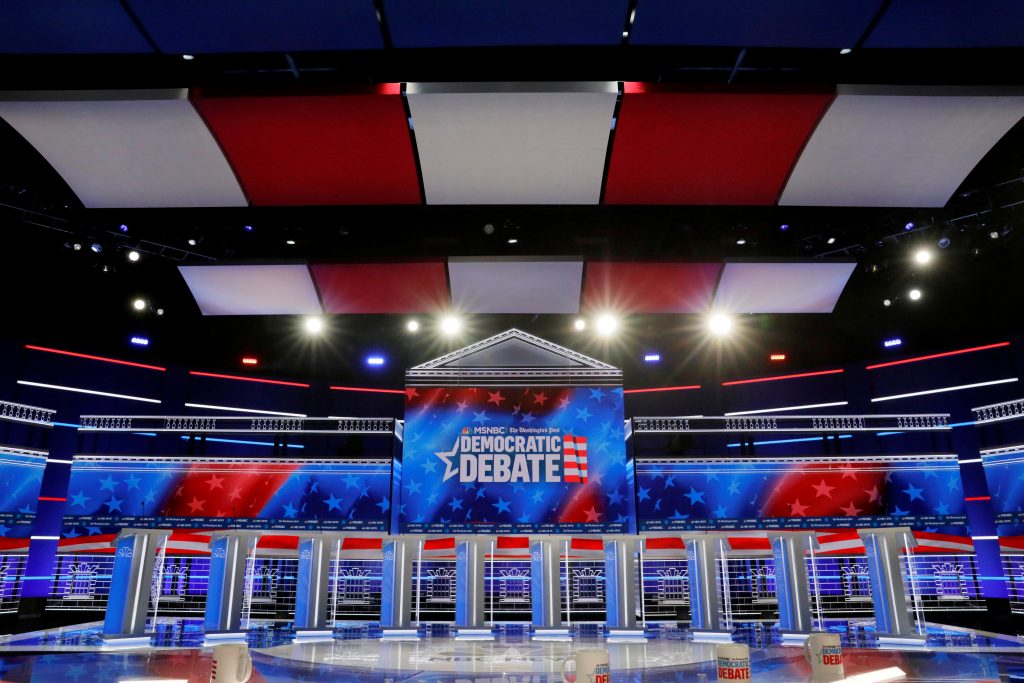 Democratic presidential candidates clashed Wednesday in a debate over the future of health care in America, racial inequality and their ability to build a winning coalition to take on President Donald Trump next year.

The face-off came after hours of testimony in the impeachment inquiry of Trump and at a critical juncture in the Democratic race to run against him in 2020. With less than three months before the first voting contests, big questions hang over the front-runners, time is running out for lower tier candidates to make their move and new Democrats are launching improbable last-minute bids for the nomination.

But amid the turbulence, the White House hopefuls often found themselves fighting on well-trodden terrain, particularly over whether the party should embrace a sweeping “Medicare for All” program or make more modest changes to the current health care system.

Sens. Elizabeth Warren of Massachusetts and Bernie Sanders of Vermont, the field’s most progressive voices, staunchly defended Medicare for All, which would eliminate private insurance coverage in favor of a government-run system.

“The American people understand that the current health care system is not only cruel — it is dysfunctional,” Sanders said.

Former Vice President Joe Biden countered that many people are happy with private insurance through their jobs, while Mayor Pete Buttigieg of South Bend, Indiana, complained about other candidates seeking to take “the divisive step” of ordering people onto universal health care, “whether they like it or not.”

Democrats successfully campaigned on health care last year, winning control of the House on a message that Republicans were slashing existing benefits. But moderates worry that Medicare for All is more complicated and may not pay the same political dividend. That’s especially true after Democrats won elections earlier this month in Kentucky and Virginia without embracing the program.

“We must get our fired-up Democratic base with us,” said Sen. Amy Klobuchar of Minnesota. “But let’s also get those independents and moderate Republicans who cannot stomach [Trump] anymore.”

The fifth Democratic debate unfolded in Atlanta, a city that played a central role in the civil rights movement, and the party’s diversity, including two African American candidates, was on display. But there was disagreement on how best to appeal to minority voters, who are vital to winning the Democratic nomination and will be crucial in the general election.

Sens. Kamala Harris of California and Cory Booker of New Jersey said the party has sometimes come up short in its outreach to black Americans.

“For too long, I think, candidates have taken for granted constituencies that have been a backbone of the Democratic Party,” Harris said. “You show up in a black church and want to get the vote but just haven’t been there before.”

In the moderators’ chairs were four women, including Rachel Maddow, MSNBC’s liberal darling, and Ashley Parker, a White House reporter for The Washington Post. It was only the third time a primary debate has been hosted by an all-female panel.

Buttigieg — who was a natural target given his recent rise in the polls to join Biden, Warren and Sanders among the crowded field’s front-runners — was asked early about how being mayor of a city of 100,000 residents qualified him for the White House.

“I know that from the perspective of Washington, what goes on in my city might look small,” Buttigieg said. “But frankly, where we live, the infighting on Capitol Hill is what looks small.”

Klobuchar argued that she has more experience enacting legislation and suggested that women in politics are held to a higher standard.

“Otherwise we could play a game called ‘Name your favorite woman president,’ which we can’t do because it has all been men,” she said.

Another memorable exchange occurred when Biden — who didn’t face any real attacks from his rivals — was asked about curbing violence against women and responded awkwardly.

“I think that it’s unfortunate that we have someone on the stage who is attempting to be the Democratic nominee for the president of the United States who during the Obama administration spent four years full time on Fox News criticizing President Obama,” Harris said.

But the discussion kept finding its way back to Medicare for All, which has dominated the primary — especially for Warren. She released plans to raise $20-plus trillion in new government revenue for universal health care. But she also said implementation of the program may take three years — drawing criticism both from moderates like Biden and Buttigieg, who think she’s trying to distance herself from an unpopular idea, and Sanders supporters, who see the Massachusetts senator’s commitment to Medicare for All wavering.

Sanders made a point of saying Wednesday that he’d send Medicare for All legislation to Congress during the first week of his administration.

Booker faced especially intense pressure Wednesday since he’s yet to meet the Democratic National Committee’s polling requirements for the December debate in California. He spent several minutes arguing with Warren about the need to more appropriately tax the wealthy, but also called for “building wealth” among people of color and other marginalized communities.

Businessman Andrew Yang was asked what he would say to Russian President Vladimir Putin if he got the chance — and joked about that leader’s cordial relationship with Trump.

“First of all, I’d say I’m sorry I beat your guy,” Yang said with a grin, drawing howls of laughter from the audience.