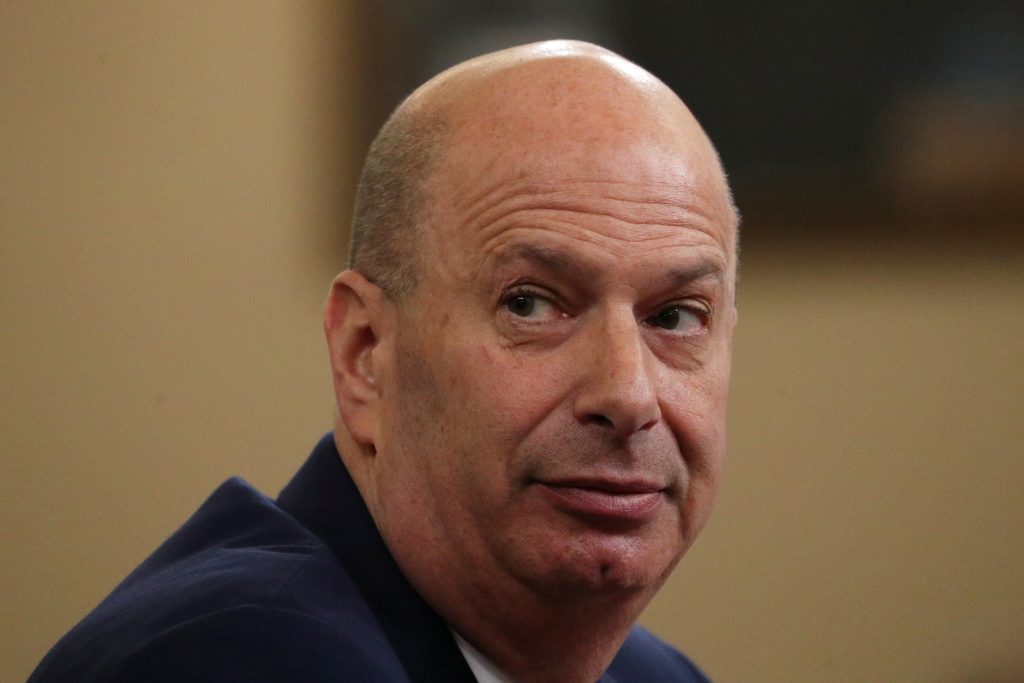 A senior U.S. diplomat on Wednesday described broad involvement at the upper levels of the Trump administration in a pressure campaign against Ukraine, giving testimony that for the first time put the secretary of state and vice president at the heart of the impeachment probe against President Donald Trump.

Gordon Sondland, the U.S. ambassador to the European Union, said he “followed the president’s orders” to work with President Trump’s personal lawyer Rudy Giuliani, who was pushing Ukraine to carry out two investigations that would benefit Trump politically as he runs for re-election in November 2020.

Sondland’s testimony was among the most significant in the four days of public hearings in the Democratic-led House of Representatives impeachment inquiry that has captivated Washington and threatens the presidency of Trump, a Republican.

The ambassador, a wealthy Oregon hotelier and Trump political donor, detailed the president’s active participation in the Ukraine controversy. Sondland depicted Secretary of State Mike Pompeo as engaged in the efforts to get Ukraine to carry out the investigations, including one targeting Democratic presidential candidate Joe Biden, and described Vice President Mike Pence as being aware of the efforts.

Testifying publicly to the House Intelligence Committee, Sondland went much further in describing the sweeping involvement of administration officials than he did in prior testimony behind closed doors.

“Everyone was in the loop. It was no secret,” Sondland said in an email he sent to top administration officials ahead of the July 25 telephone call between Trump and Ukrainian President Volodymyr Zelenskiy that triggered the impeachment inquiry.

Pompeo, Energy Secretary Rick Perry and White House acting Chief of Staff Mick Mulvaney were among the recipients of the email in which Sondland discussed Zelenskiy’s willingness to “run a fully transparent investigation.”

In the July 25 phone call, Trump asked Zelenskiy to carry out two investigations. One involved Biden and his son Hunter, who had worked for Ukrainian energy company Burisma. The other involved a conspiracy theory promoted by some Trump allies that Ukraine, not Russia, interfered in the 2016 U.S. election.

Democrats accuse Trump of abusing his power by using $391 million in U.S. security aid to Ukraine and an offer to Zelenskiy of a prestigious visit to the White House as leverage to pressure a vulnerable U.S. ally to dig up dirt on domestic political rivals.

Biden, the former vice president, is a leading candidate for the Democratic nomination to face Trump in the November 2020 presidential election. Trump has accused Biden of corruption without offering evidence. Biden has denied any wrongdoing.

Republican lawmakers said Democrats had failed to show through Sondland’s testimony that Trump had ordered or directed the pressure campaign against Ukraine.

Speaking to reporters at the White House, Trump referred to comments by Sondland about a conversation in which the envoy said Trump had told him he wanted nothing from Ukraine.

Sondland portrayed himself as a reluctant participant in the pressure on Ukraine. He also said he opposed withholding the security assistance, as Trump ordered. The aid was approved by Congress to help Ukraine combat Russia-backed separatists. It was provided to Ukraine in September after the controversy became public.

Sondland said he told Pence in September that he was concerned that withholding the aid “had become tied to the issue of investigations.” Pence’s chief of staff denied that any such conversation with Sondland occurred.

Sondland, tapped as Trump’s EU envoy after he donated $1 million to the president’s inauguration, described Trump in May telling him, along with Perry and then-U.S. special envoy to Ukraine Kurt Volker, to work with Giuliani – the former New York mayor who held no U.S. government job – on Ukraine policy.

Sondland said the three worked “at the express direction of the president of the United States” with Giuliani. The efforts by Giuliani to get Zelenskiy to investigate the Bidens “were a quid pro quo for arranging a White House visit” for the Ukrainian leader, Sondland said, using a Latin term meaning to exchange a favor for another favor.

Trump has said he did nothing wrong in the Ukraine matter and specifically denied any quid pro quo. On Wednesday, the president said he does not know Sondland – his own appointee – well, but he seems like a “nice guy.”

Adam Schiff, the Intelligence Committee’s Democratic chairman, called Sondland’s testimony “a very important moment in the history of this inquiry.”

“It goes right to the heart of the issue of bribery as well as other potential high crimes and misdemeanors,” Schiff told reporters. “But we also have heard for the first time that knowledge of this scheme was pervasive.”

Republicans defended Trump on Wednesday by pointing to a statement by Sondland that he was presuming the security aid for Ukraine was tied to investigations, but that no one had actually told him this. “This all is based on presumptions that turned out to be wrong,” Steve Scalise, the No. 2 House Republican, wrote on Twitter. “Why is this impeachment circus still going on?”

The impeachment inquiry could lead the House to approve formal charges against Trump – called articles of impeachment – that would be sent to the Republican-controlled Senate for a trial on whether to remove him from office. Few Republican senators have broken with Trump.

Sondland’s testimony cast more light on the role of Pompeo, a close Trump ally. Sondland provided correspondence showing he and Pompeo communicated about his effort to get Zelenskiy to commit to undertake investigations as a way to free up the security aid.

“All good. You’re doing great work; keep banging away,” Pompeo told Sondland in early September, according to email correspondence cited in his testimony.

Sondland said that even as late as Sept. 24, the day the House launched its impeachment inquiry, Pompeo was directing Volker to speak with Giuliani.

Pompeo, on a visit to Brussels, ignored reporters’ questions about Sondland’s testimony.

Sondland said he told Pence in September “that I had concerns that the delay in aid had become tied to the issue of investigations.”

“The vice president nodded, he heard what I said, and that was pretty much it,” Sondland testified.

Sondland said Trump never told him directly that the aid to Ukraine was conditioned on Kiev announcing investigations. Sondland testified he was “adamantly opposed” to the suspension of the security aid because “the Ukrainians needed those funds to fight against Russian aggression.”

“In the absence of any credible explanation for the suspension of aid, I later came to believe that the resumption of security aid would not occur until there was a public statement from Ukraine committing to the investigations of the 2016 election and Burisma, as Mr. Giuliani had demanded,” Sondland testified.