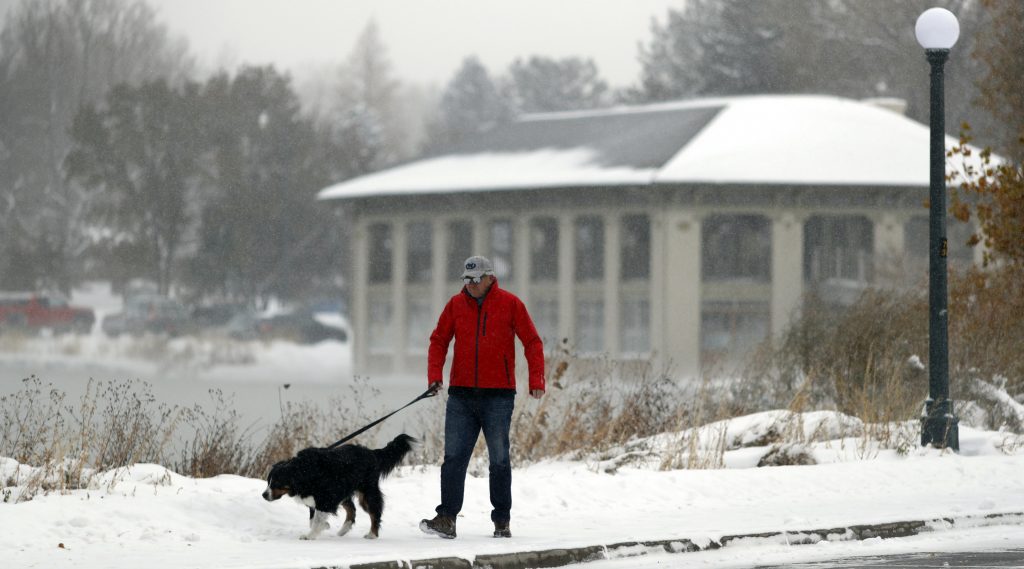 Winter is coming, and you know what that means: Social media and news broadcasts will be lit up with words like “polar vortex,” “bombogenesis” and “thundersnow” grabbing national headlines.

Some winter weather terms are technical. Some are weird. Others are important to understand for staying safe in potentially hazardous situations.

Here are the terms you need to know this winter.

Blizzard: When snow is falling heavily, people may casually describe the scene outside as a blizzard, but the term has a very specific definition.

In order for a storm to be a blizzard, the location it’s affecting must experience sustained winds or frequent gusts at or above 35 mph for at least three hours, combined with falling and/or blowing snow. Such a combination of snow and wind frequently results in whiteout conditions, making for dangerous or impossible travel.

It’s possible for there to be a blizzard even when it’s not precipitating, if strong winds whip up snow that’s already fallen. That’s relatively common over the Northern Plains, where bitter arctic-chilled air on the backside of storms often makes for treacherous travel.

Bombogenesis and bomb cyclones are real things. Bombogenesis occurs when a storm’s central barometric pressure plummets 24 millibars in 24 hours. It’s a sign that the storm is evacuating air, allowing explosive strengthening. Storms that achieve this so-called bomb status are known for their fury, bringing howling winds, copious precipitation, and sometimes a blockbuster snowstorm.

The polar vortex sounds scary, but it’s not a storm. It’s a belt of winds encircling a reservoir of frigid air in the North Pole (and also the South Pole during its winter). Occasionally, lobes or pieces of it break off allowing intense cold to plunge into the Lower 48 states.

There are actually two polar vortexes. The one just described resides in the lower atmosphere (in the troposphere) and is most frequently referenced by weather forecasters. The other vortex, higher up (in the stratosphere), is of greater interest to academic researchers, but its behavior can also have significant implications for mid-latitude weather.

Thundersnow is exactly what it sounds like: a thunderstorm but with snow rather than rain. Especially in intense winter storms, vivid lightning, booming thunder and heavy snowfall can occur simultaneously. If you see a flash or hear a rumble, it’s a sign to drop the shovel and ditch the sleds – heading indoors to safety.

Light, moderate, and heavy snow: During a storm, the intensity of snowfall matters a lot. Lighter snow is easier for motorists to negotiate and road crews to clear, whereas heavy snow can be crippling.

By definition, the intensity of snowfall is determined by how much it reduces visibility. Heavy snow brings down visibility to 5/16ths of a mile or less, while visibility is greater than 5/8ths of a mile in light snow. Moderate snow is everything in between. Typically heavy snow produces at least an inch of snow per hour, while light snow leaves behind less than half an inch per hour. During the most exceptional storms, 2 or 3 inches per hour snowfall rates or higher are possible.

Snow showers: Just as you could get scattered rain showers in the warmer seasons, it’s possible for a spattering of intermittent snow to light up the radar. In these situations, the snow doesn’t fall over enough territory to be considered “widespread.” Snow showers can feature snowfall rates of all intensities. Occasionally, if they are heavy enough, they can create localized areas of hazardous travel conditions, by coating roads and lowering visibility.

Snow squalls are more potent. They’re short-lived bands of heavy snow and are sometimes accompanied by strong winds. Snow squalls can create whiteout conditions reminiscent of a summertime thunderstorm. Snow squalls often contain all the ingredients of a blizzard, but don’t last long enough for the issuance of blizzard warning. But they’re often even more deadly.

Some of the biggest car wreck disasters of the past several decades have come when snow squalls envelop drivers in a sudden bleached shroud. A 131-car pileup claimed a life in Wisconsin in February, less than a month after a snow squall snarled traffic in a 27-car Pennsylvania accident. The National Weather Service rolled out a brand new snow squall warning product last January to be able to better warn before a snow squall strikes.

Flurries are usually inconsequential. A vigorous flurry might briefly lower visibility or whiten the ground but, with most flurries, you can almost count the number of individual snowflakes flying around. It’s just like confetti drifting capaciously through the air, catching the sun as sporadic flakes dance their whimsical dance.

Graupel are snow “pellets.” They form when supercooled droplets of water collect around and freeze onto snowflakes. Graupel pellets may bounce off your jacket or the hood of your car; you can even hold them in your hand and crunch them. They’re usually about a quarter-inch across.

Sleet is also a pellet-y precipitation and may appear very similar to graupel, but its formative processes are different. Sleet occurs when snowflakes melt in a layer of warm air, but refreeze into hardened ice pellets before pelting the ground like a peppering of bbs.

Freezing rain is exactly that – rain that freezes. It forms when ordinary rain falls through warm air, but the ground temperatures are below freezing. When that happens, the water freezes on contact, riming everything it touches with a slick glaze. It’s perhaps the most dangerous type of precipitation that can fall. Enough freezing rain, and you get an ice storm, which are infamous for downing power lines and resulting in widespread hazardous weather.

Watches, warnings, and advisories: For inclement winter weather situations, the National Weather Service will issue different kinds of alerts for you to be prepared for different hazardous situations.

A winter storm watch is issued when there is the potential for “significant and hazardous winter weather” in the next 48 hours. This can mean at least 5 inches of snow and sleet, enough ice accumulation to cause damage to trees and power lines or a “life-threatening or damaging” combination of these hazards. A watch conveys such conditions are possible. It is not a guarantee.

A winter storm warning is issued when the above conditions are occurring or imminent.

A winter weather advisory is for conditions less severe than those in a warning, meaning 2 to 4 inches of snow or any amount of freezing rain.

The Weather Service also may issue blizzard or ice storm warnings when conditions are met and also alerts for extreme wind chills, a measure of how cold the air feels, factoring in wind speeds.

In 2016, the Weather Service introduced a special “potential winter weather hazard” statement for situations in which even very light amounts of precipitation combined with cold temperatures might create dangerous travel conditions during heavy commuting periods.