The meeting that could determine the political future of the state of Israel was scheduled for Tuesday, 10 p.m. local time, 26 hours before Blue and White chief Benny Gantz’s mandate to form a government expires.

Israeli Prime Minister Binyamin Netanyahu‏‏ and Gantz plan to sit down for a last-ditch attempt to bridge the gaps between them that have so far prevented the establishment of a unity government. 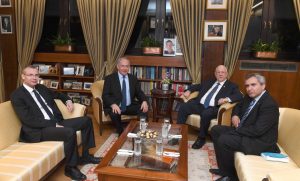 Contacts between the two sides were described as “serious” by the Kan public broadcaster.

In order to sanitize PM Netanyahu’s role in the unity government, Blue and White was said to be asking the prime minister to either give up on passing legislation granting him immunity from prosecution, or to agree to take a leave of absence if indicted, even if he receives immunity.

Netanyahu would have to take the leave of absence six to eight months after an announcement from Attorney General Avichai Mandelblit that he intends to indict the Likud leader, the report said.

The meeting was reportedly set up at the urging of Yisrael Beytenu leader Avigdor Liberman, who has been holding talks with Netanyahu which were characterized in a joint statement as “good” and “professional.” 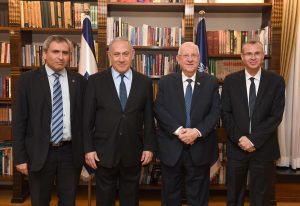 Meanwhile, a whole round of meetings were being held prior to Netanyahu-Gantz.

Netanyahu arrived at the President’s Residence to discuss matters with President Reuven Rivlin at 8 p.m.

Gantz was set to meet with Liberman at the same time, Blue and White said.

Gantz was also talking with his party’s No. 2, Yair Lapid, who has been said to oppose a unity government with Likud throughout the crisis.