Get the Phone to Ring 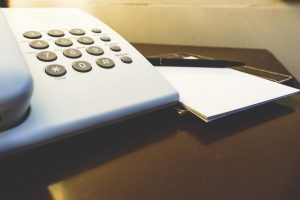 Each time she enters the house, the worried mother checks the ID on her home telephone. To her dismay, none of the missed calls are from the parties she is so desperately waiting to hear from. When she is home, she ensures that the ringer is on the highest volume, yet the silence is deafening.

The anxious father makes sure to stay around after davening to shmooze, hoping that someone will mention an idea of some sort. Yet it is to no avail.

The elderly grandmother does her part, trying her best to mention her beloved grandchild when she converses with total strangers at the doctor’s office. Yet thus far, she has no results to show for her efforts.

The daughter/granddaughter in question does all she can to keep her own emotions in check, to focus on her work instead of focusing on the fact that there isn’t a single name on the table.

These scenes — or variations thereof — are common throughout our community. Far too many wonderful parents — and their children who are of shidduchim age — are dealing with a double anguish: In addition to the fact that the bashert has not yet arrived on the scene, the fact that virtually no shidduchim are being suggested adds a devastating feeling of abandonment to an already pain-filled situation.

One certainly does not have to be a veteran shadchan to think of a good shidduch idea. The most successful shadchan was inexperienced when he made his first shidduch, and many wonderful marriages have been arranged by total novices to the field of matchmaking. Everyone can — and should — spend time trying to think of shidduchim for people they know. In some situations, it may be advisable to pass the idea on to someone with more experience to try to bring the match to fruition.

Like many other aspects of living a Torah life, the role of those in the “parashah” is very different from that of their friends, neighbors and acquaintances. While the task of those within is to fortify themselves with emunah and bitachon, those on the outside who have the ability to take concrete steps to help must not use terms like “bitachon” to shirk their own obligations.

Similarly, when it comes to the world of giving information about shidduchim, we find two equally dangerous extremes. It is crucial that anyone in a position to be approached for information — which is almost everyone — is proficient in the practical application of relevant halachos.

On the one hand, information that, according to halachah, one is obligated to divulge is too often not told. So many divorces could have been avoided, so much devastation and heartache prevented, if only the individuals involved had given crucial and truthful information, especially about medical conditions. At the same time, in many other cases, individuals give erroneous and misleading negative descriptions of another person. Inaccurate, third-hand innuendo is transmitted as irrefutable fact, and biased, irrelevant information is volunteered. In the process, reputations are unfairly besmirched.

This week — as we learn in the parashah about how Avraham Avinu went about obtaining a shidduch for his son — is an appropriate time for all of us to focus on this most important act of gemilus chassadim. Let us do our utmost to ensure that the phone does ring, that shidduchim are being suggested, and that we all are doing our hishtadlus so that every individual finds their basherte zivug and goes on to build a bayis ne’eman b’Yisrael.