British Prime Minister Boris Johnson recently acknowledged the rise in anti-Semitic attacks in the country and vowed to take additional steps to protect the U.K. Jewish community, it was revealed on Sunday.

“I would like to take this opportunity to express my heartfelt support for all Jewish communities in the United Kingdom and around the world. Please be assured of my resolute support for all aspects of Jewish life,” Johnson wrote in a letter to Jewish Agency Chairman Yitzchak Herzog dated earlier this month. 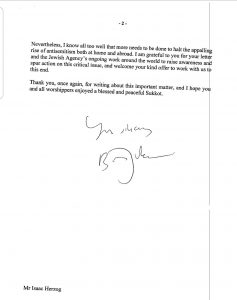 “I completely agree that we need to do more to stamp this out and better protect our Jewish friends and neighbors. The safety of Jewish people is a top priority for the U.K. government,” he wrote.

Johnson’s response was written after Herzog wrote a letter to 30 European heads of state where he said they must do a better job protecting Jews in their home countries.

Herzog wrote the letter in light of the recent attempted murder of Jewish worshipers at a synagogue in Halle, Germany, on Yom Kippur. In the letter, Herzog called on European leaders to pass laws, utilize law enforcement agencies and reinforce education efforts to help eradicate anti-Semitism across the continent.

In Johnson’s response to Herzog, he said his government is putting its money where its mouth is.

“The government has recently doubled spending on security for places of worship to £1.6 million and continues to invest in initiatives to drive understanding and tolerance through education and community engagement. I am also happy to welcome Lord Mann as the new independent anti-Semitism adviser, who will hold us accountable for our efforts to tackle the scourge of anti-Semitism,” Johnson said, referring to the former Labour MP who lead the bi-partisan Parliamentary inquiry commission on anti-Semitism and quit the Labour Party over rising Jew-hatred within his party.

Herzog said Johnson’s unequivocal response “must be adopted by political parties and leaders the world over. They must follow the example he has set in committing to fight anti-Semitism. This is especially true given the deep-seated concern in the rise of anti-Semitism around the world and especially in Europe and within certain quarters of the British political landscape.”