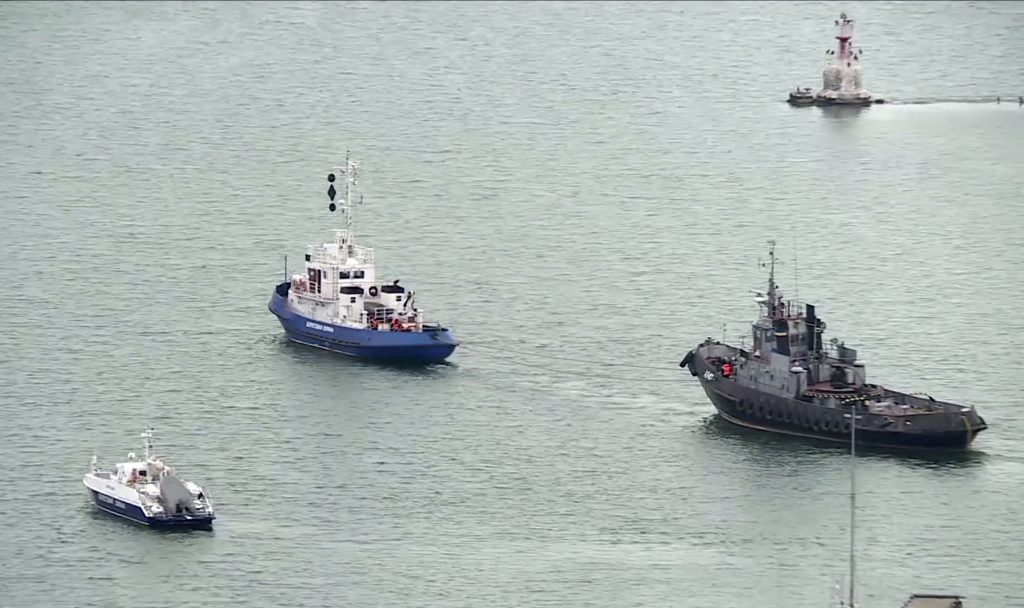 Three Ukrainian naval ships that were seized by Russia nearly a year ago have been returned, Russia’s Foreign Ministry said Monday.

The two gunboats and a tug were taken by the Russian coast guard on Nov. 25, 2018, as they maneuvered near the Kerch Strait that connects the Black Sea with the Azov Sea. The Kerch Strait runs between mainland Russia and Russia-annexed Crimea.

Russia claimed the Ukrainian ships had violated procedures for transiting the strait, while the Ukrainians said they were traveling in international waters.

The Russian coast guard fired shots, then seized the ships and their crew of 24 Ukrainian sailors. The sailors were detained for 10 months and returned home in September as part of a prisoner exchange.

Ukraine’s Foreign Ministry said that the Ukrainian authorities will conduct a thorough check of the ships to make sure that no equipment is missing. It said that regardless of the ships’ return, Ukraine will press the case against the Russian seizure of the ships in an international tribunal.

The Kremlin said in the call that the two leaders focused on the upcoming meeting of the leaders of Russia, Ukraine, Germany and France to discuss a settlement for the five-year conflict in eastern Ukraine that has killed at least 13,000 people. The fighting began in 2014 after Russia annexed Crimea from Ukraine and pits Russia-backed separatists against Ukrainian troops.

The Kremlin said Putin and Macron agreed the meeting scheduled for Dec. 9 should help “quickly and fully” implement a 2015 peace plan for eastern Ukraine that was brokered by France and Germany. The Minsk agreement envisages broad autonomy for the separatist regions in eastern Ukraine and an amnesty for the rebels.

The Kremlin said Putin and Macron also talked about the need for Ukraine to fulfill its obligations under the political aspects of the deal, including passing a law giving a special status to the rebel regions.

Russian Foreign Minister Sergey Lavrov said Monday that Moscow expects France to make sure that the four-way meeting “underlines that the Minsk agreement is inviolable and has no alternative.”