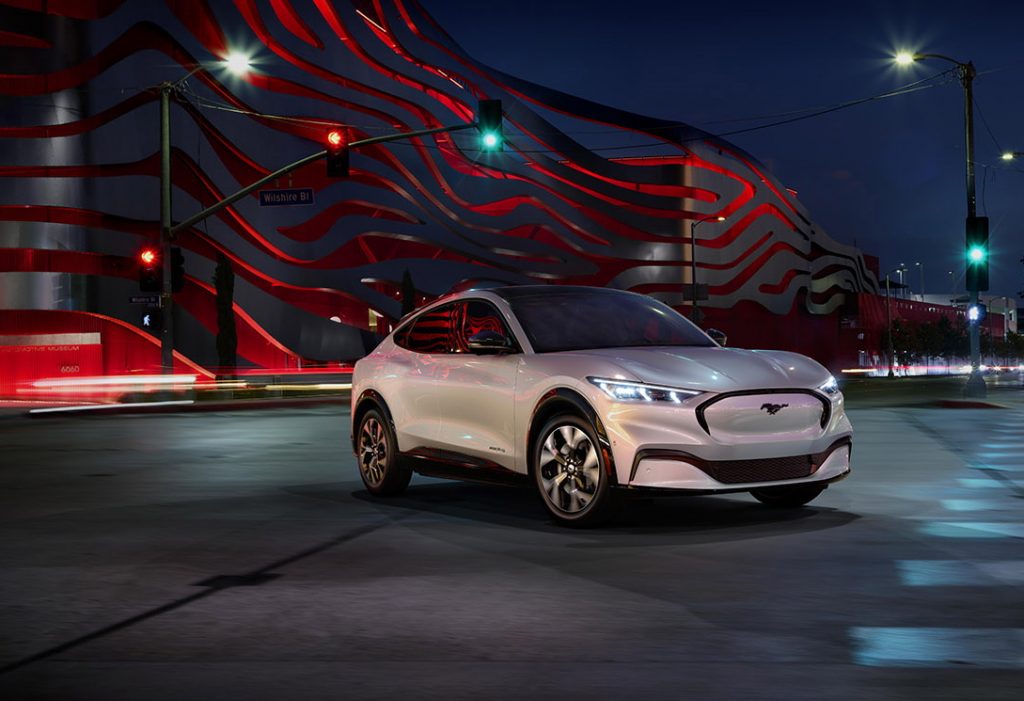 For more than a half century, asking Ford Mustang owners why they’d decided to purchase the iconic American muscle car would elicit some variation of the following answer: “They’re cool.”

But as the second decade of the 21st century comes to a close, coolness alone, it appears, doesn’t cut it. Auto sales are dominated by a fierce demand for SUV’s and big name automakers are investing heavily in a future that is expected to be dominated by electric energy.

After reading the writing on the wall, Ford Motor Company has taken the bold step of melding the Mustang brand with the latest in automotive trends. The result, unveiled late Sunday, is the Mustang Mach-E, an all-electric sport utility vehicle that the company claims will have a range of at least 230 miles and possibly as high as 300, depending on how the vehicle is equipped. (The Chevy Bolt, by comparison, boasts a 240-mile range and Tesla’s Model 3 is about 220).

Toying with, much less fully reimagining, the classic car was undoubtably no small decision. When Ford announced last year plans to stop making passenger cars in North America due to declining sales, the Mustang was the lone exception.

With over-the-air software updates and a large black touch screen dominating the console, in some ways the five-seat “all electric pony” more closely resembles a Tesla than its more immediate and recognizable family members, which include the sports coupe, convertible and special edition Mustangs. And the resemblance is not limited to style. In an online news release, the company touted an idea that Elon Musk, Tesla’s chief executive, pioneered years ago: electric vehicles can be cool.

“The Mustang Mach-E wholeheartedly rejects the notion that electric vehicles are only good at reducing gas consumption,” Hau Thai-Tang, Ford’s chief product development and purchasing officer, said in the statement. “People want a car that’s thrilling to drive, that looks gorgeous and that can easily adapt to their lifestyle – and the Mustang Mach-E delivers all of this in unmatched style.”

Also like Tesla: To purchase a Mach-E, customers are being asked to visit the vehicle’s registration site and make a $500 reservation deposit. (Deliveries for certain editions won’t begin until the spring of 2021). On a website devoted to the vehicle, Ford highlights specs that no longer seem incompatible thanks to Tesla, such as the Mach-E’s ability to go from 0-60 mph in the mid-3-second range alongside information about the convenience of charging.

The vehicle’s price starts at $52,400, but customers will be able to take advantage of a $7,500 federal tax credit, the company claims.

The push toward SUVs is being driven by a growing number of baby boomers and millennial car buyers, both of whom favor SUVs over cars and make up a majority of the car-buying market, according to experts.

Experts say consumers are drawn to SUVs and crossovers for their versatility. The vehicles offer more space, a higher ride off the ground and the ability to accommodate families.

Some buyers gravitate toward them for an even simpler reason: they feel like they’re easier to get inside than a car that is lower to the ground.

Unlike a decade ago – when a combination of rising gasoline prices and economic anxiety led consumers to opt for smaller vehicles – a new generation of efficient engines have made SUV purchases a sound choice financially. The reason that many consumers resisted buying SUV’s – bad gas mileage – has been eliminated by engineering improvements.

Though Ford’s embrace of electricity trails Tesla, that doesn’t mean the company is behind the curve. In recent years, many of the world’s largest automakers – BMW, Jaguar, Mercedes – have unveiled stylish electric vehicles that combine pleasing looks with formidable power.

After nearly a century of building vehicles powered by fossil fuels, General Motors – one of the world’s largest automakers – has begun its gradual shift away from internal combustion engines while touting what executives refer to as an “all-electric future.” GM plans to release more than a dozen new electric models by 2023, including a sporty crossover and larger SUVs.

There are 1.18 million electric vehicles on the road in the United States, and total EV sales rose more than 80 percent between 2017 and 2018, according to the Edison Electric Institute. And yet, EV sales, which are dominated by Tesla and GM, still represent a fraction of automotive sales domestically and worldwide. In the first quarter of 2019, for example, EV’s made up just 1.5 percent of all new car sales in the U.S., the Institute notes.

Ford has been searching for an avenue into big electric sales for several years. In 2017, the company announced plans to create a group known as “Team Edison,” tasked with developing fully electric cars. Sherif Marakby, Ford’s head of electrification and autonomous vehicles, told Automotive News at the time that the company is on pace to produce 13 electrified vehicles over the next five years.

“We see an inflection point in the major markets toward battery electric vehicles,” Marakby said. “We feel it’s important to have a cross-functional team all the way from defining the strategy plans and implementation to advanced marketing.”

Jake Fisher, director of auto testing for Consumer Reports, told The Associated Press that the Mach-E’s range could push EVs even further into the mainstream.

“Seeing 250 miles as a real thing has been kind of a game changer in the electric car market,” Fisher said. “There haven’t been a lot of choices for a vehicle that really could take the place of a mainstream vehicle. It’s a whole different animal now.”