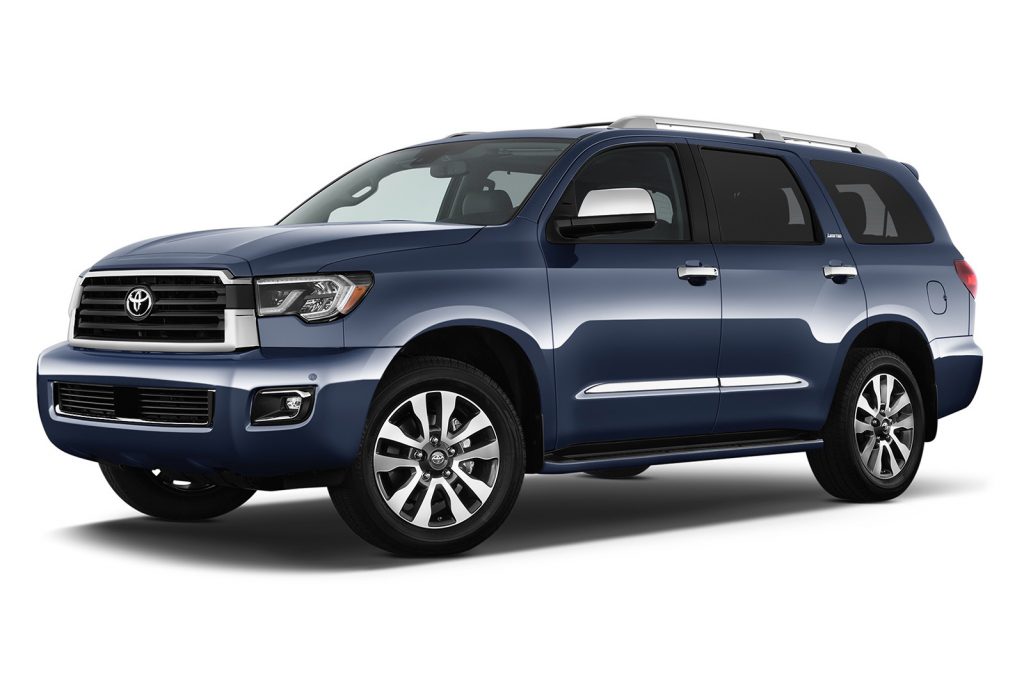 2019 Toyota Sequoia: When you need some space.

Marketer’s pitch: “Ready for everything you’ve got.”

What’s new: Not much. The Sequoia had its last redesign in 2008.

Up to snuff? When you’re planning a family trip to Nebraska and Iowa, it’s important to remember that a bevy of fleet vehicles will not await your arrival. Someone offers something, and you grab it.

Still, I was eager to try the Sequoia: In eight years of reviewing cars, I’d never gotten my hands on one.

Yet a quick first trip from the Omaha “airport” to the home of the biggest, baddest doughnut we’d ever laid eyes on — the Sequoia of doughnuts, really — showed me why it may have been kept out of my hands.

Play some tunes: The Sequoia as tested offered seating for seven (seating for eight is possible in the right configurations), yet the test model had a grand total of one USB port. This is a vehicle last redesigned when George W. Bush was president.

I’ve often complained about the stereo sound in the Sturgis Family Sienna, and that is exactly what the Sequoia sound is — sad. Tinny, soft, lacking dimension, turning all songs into Fisher-Price Big Mouth Singers’ versions of the songs you know and love.

Volume and tuning were easily handled from dials, and three buttons get you around the main portion of the system. But from there, it’s the small, hard-to-read, lost-in-the-sun touchscreen.

Friends and stuff: Having spent a couple of hours in the generous accommodations of a Ford Expedition for a previous review, riding in the Sequoia was more of a squeeze. The cargo hold behind the three rows seemed tighter — space there is 18.9 cubic feet, so picture a large sedan standing on end. But overall cargo space tops at 120 cubic feet. It’s funny that Sturgis Kids 1.0 and 4.0, Sturgis Fiance 1.0, and the much-missed Sturgis 2.0’s significant other all felt more squeezed back there.

Driver’s Seat: The Sequoia’s driving manners definitely won this portion of the race thus far. The long, large windows made the all-around view much nicer, and lane changes were no longer the stuff of nightmares the way the Expedition gave me.

On the road: Handling in the Sequoia felt more carlike. Driving the streets of Omaha and the highways to Des Moines didn’t offer a whole lot of steering challenges, but the cruising was far easier.

The brick streets of Old Market Omaha really tossed the Sequoia around, though I never put the Expedition to that kind of test.

The Sequoia feels a lot of the wind as well, and it comes through the steering wheel for drivers.

A trip in the rain really knocked around the TRD edition — puddles on the highway sent it diving and slipping from side to side. Some of that was the poor road surface, but not all of it.

Driving a car on a trip is never a problem when the review is positive. But this negative review gives me pause, so I’ll add this caveat — maybe the roads in Nebraska and Iowa are far worse than I’m used to. But I know that these tires — 275/55/20s — are wide and designed for keeping the vehicle overtop the mud, so they probably do the same thing for the rain, when it’s less welcome.

Off the road: I’m sure the Sequoia is a welcome companion here. Never did have the pleasure.

Up to speed: The acceleration was pretty strong, unsurprisingly. The 5.7-liter V-8 engine creates a whopping 381 horsepower and 401 pound-feet of torque, the monster of the bunch. The truck reaches 60 mph in 6.7 seconds, according to a Motor Trend review of a 2017 model (it’s not that different).

Still the Sequoia tips the scales at almost 3 tons.

Shifty: The 6-speed transmission also harkens from another era. No, you can’t have fun shifting it. It’s a Toyota; forget fun and enjoy the many, many years you’ll have your Toyota. The many fun-free years.

Fuel economy: Well, monsters sure are hard to keep fed. I averaged 12.8 mpg on the first tank of gas, where we hardly left Omaha. Eek. Then it went up to 15.5 on a more highway-oriented trip around Iowa. Feed the Sequoia whatever, and count your blessings.

How it’s built: Consumer Reports gives the Sequoia a predicted reliability of 4 out of 5.