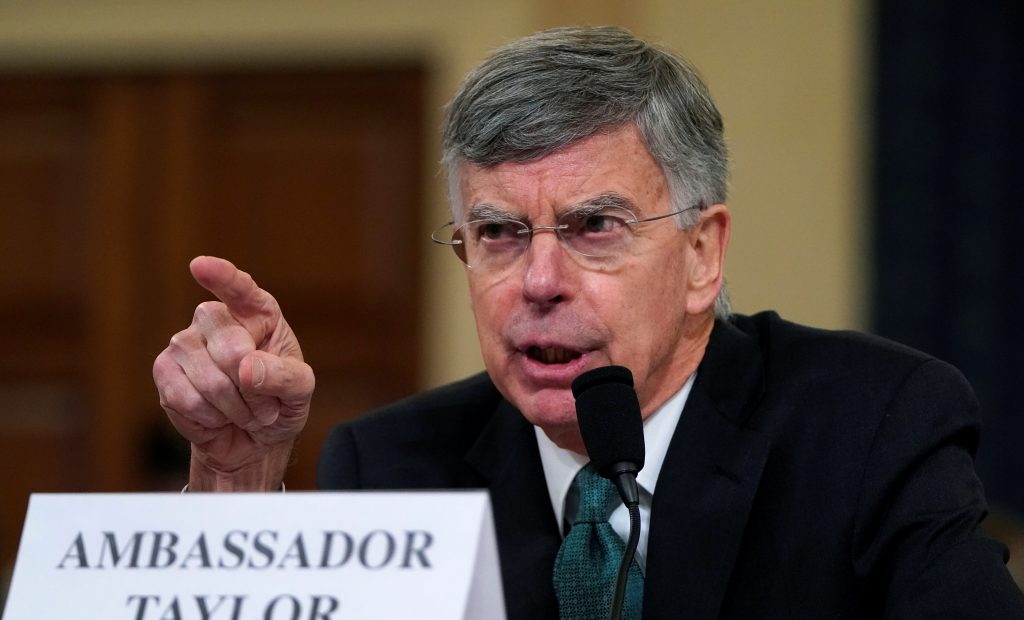 Two senior State Department officials said attempts by President Donald Trump’s personal lawyer and others to instigate politically motivated investigations in Ukraine and denigrate U.S. diplomats were damaging to both U.S. and Ukraine.

William Taylor, the acting ambassador to Ukraine, described his shock when he was informed that the president through acting Chief of Staff Mick Mulvaney had ordered a hold on assistance to Ukraine on July 18 — a week before a telephone call between President Trump and Ukraine President Volodymyr Zelensky that has become a central focus of the House impeachment inquiry.

“I and others sat in astonishment — the Ukrainians were fighting the Russians and counted on not only the training and weapons, but also the assurance of U.S. support,” Taylor said, as the first public hearing in the impeachment probe got underway Wednesday. “In an instant, I realized that one of the key pillars of our strong support for Ukraine was threatened.”

In a new revelation in the inquiry, Taylor described a call that took place one day after Trump’s July 25 call with Zelensky that the diplomat said he wasn’t aware of when he testified behind closed doors last month.

The call was made in the presence of a member of Taylor’s staff who could hear Trump on the phone, “asking Ambassador Sondland about ‘the investigations,'” Taylor said.

Another witness, George Kent, deputy assistant secretary of state for European and Eurasian affairs, testified that Giuliani, Trump’s lawyer, was working with corrupt Ukrainians and their proxies to attack U.S. diplomats as well as to pressure Zelensky.

“It became clear to me that Giuliani’s efforts to gin up politically motivated investigations were now infecting U.S. engagement with Ukraine, leveraging President Zelensky’s desire for a White House meeting,” Kent said at a hearing of the House Intelligence Committee.

Kent and Taylor testified as the committee opened historic impeachment hearings. Their statements are key to the case Democrats are attempting to make that Trump put pressure on Zelensky to conduct investigations targeting former Vice President Joe Biden’s and his son Hunter Biden’s ties to a Ukrainian company, Burisma Holdings, and into a debunked conspiracy theory that Ukraine, not Russia, had interfered in the 2016 U.S. election.

Kent testified that the pressure point for Ukraine was a White House meeting for Zelensky, as well as aid that had been approved by Congress but delayed by the Trump administration.

Kent said countries want White House meetings because that is “the ultimate sign of endorsement and support” from the U.S.

Taylor called the withholding of aid “alarming,” because in addition to undermining Ukraine’s war effort against Russia, it sends a message to Russia, which annexed the Crimea and is backing separatists fighting the government in Kyiv.

Russians “are looking for any sign of weakness” in U.S. support for Ukraine, he said.

Both men have previously given closed-door depositions to the three committees that have been leading the impeachment inquiry, and the general outlines of their testimony is already known. But providing it before TVcameras gives the public its first opportunity to gauge their credibility and the seriousness of the allegations.

Trump’s allies dismissed their testimony, arguing that they weren’t directly involved in some of the discussions.

House Intelligence Chairman Adam Schiff opened the hearing by laying out a case he said would show a serious abuse of power by Trump in which he sought to exploit an ally’s vulnerability to Russian aggression to aid his re-election campaign.

“The facts in the present inquiry are not seriously contested,” Schiff said as he presented a timeline of events that have become the center of an investigation that threatens Trump’s presidency. “Is that what Americans should now expect from their president? If this is not impeachable conduct, what is?”

Schiff was followed by Rep. Devin Nunes, the top Republican on the committee, who countered by characterizing the Democratic-led impeachment effort as part of “a scorched earth war against President Trump” and a made-for-TV spectacle.

Nunes called the hearings an extension of previous Democratic attempts to politically damage Trump. It starting with the investigation into Russian election interference that he said was “a three-year-long operation by the Democrats, the corrupt media, and partisan bureaucrats to overturn the results of the 2016 presidential election.”

Both Taylor and Kent told impeachment investigators in earlier private depositions that Trump sought to leverage nearly $400 million in U.S. military assistance to Ukraine, as well as a White House meeting with Zelensky, to get a commitment for those probes.

Taylor — the envoy picked by Secretary of State Michael Pompeo to replace ousted Ambassador Marie Yovanovitch in May — testified in a closed-door session that he grew increasingly concerned that Ukraine aid was being held hostage to White House demands for politically motivated investigations. Kent testified that he was told that Trump “wanted nothing less than President Zelensky to go to the microphone and say ‘investigations, Biden and Clinton.'”

Republicans argue that Trump could not have demanded a quid pro quo, since the aid was eventually released and Zelensky did not order those investigations. GOP members of the Intelligence Committee are likely to emphasize that neither Taylor not Kent have first-hand knowledge about the president’s actions regarding Ukraine.

In a separate hearing on Friday, Yovanovitch is expected to recount a pressure campaign led by Trump’s personal lawyer, Rudy Giuliani, that led to her ouster, which she outlined in a closed deposition.

Even as public hearings continue, the committees leading the investigation have invited two additional officials to testify behind closed doors. David Holmes, the political counselor in the U.S. embassy in Ukraine, was asked to appear on Friday, according to an official working on the inquiry. Mark Sandy, the associate director for national security programs at the White House Office of Management and Budget, was invited for Saturday, the official said.

Schiff has announced that eight more witnesses would appear at open hearings before the committee next week, starting on Tuesday. Three of them, Trump’s former special envoy to Ukraine, Kurt Volker; David Hale, the undersecretary of State for political affairs; and Tim Morrison, who has served on the National Security Council, were among the witnesses requested by House Republicans, though all have given depositions that were sought by Democrats.

Schiff’s list did not include others whom the GOP wanted, including Hunter Biden and the whistle-blower.