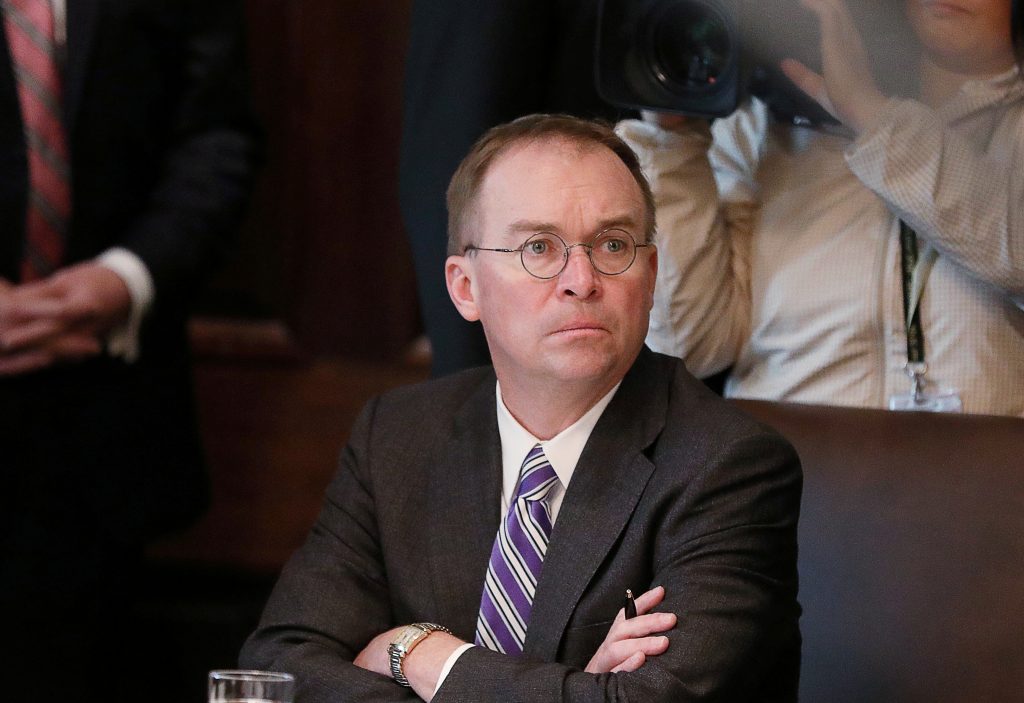 President Donald Trump has been threatening for weeks to fire acting chief of staff Mick Mulvaney, but senior advisers have counseled him to hold off on such a drastic step amid a high-stakes impeachment probe, according to three people familiar with the discussions.

Trump has expressed particular anger over Mulvaney’s performance in an Oct. 17 news conference in which Mulvaney stunned White House aides by saying military aid to Ukraine was withheld to pressure its government to launch investigations that could politically benefit Trump, two of the people said. Later, Mulvaney issued a statement saying the media had misconstrued his comments and that “there was absolutely no quid pro quo.”

Senior advisers have cautioned Trump that removing Mulvaney at such a sensitive time could be perilous – both because Mulvaney played an integral role in the decision to freeze the aid, and because of the disruption that would be caused by replacing one of Trump’s most senior aides.

“I don’t think you’ll see him going anywhere until after December,” said one Trump adviser, who like others spoke on the condition of anonymity to discuss private conversations. “But the president was very unhappy with that press conference. That was a very bad day for the president.”

Mulvaney had direct talks with Trump about the president’s desire to withhold nearly $400 million in security aid to Ukraine, The Washington Post has reported. At the same time, Trump and other allies were pressuring Ukraine to open an investigation of Democratic rival Joe Biden and of theories about the country’s role in the 2016 election, according to congressional testimony in the impeachment inquiry.

Trump’s advisers have cited as a cautionary tale the example of national security adviser John Bolton, who was dismissed in September. Bolton is now a sought-after witness for Democrats, and despite White House instructions to defy a congressional subpoena has expressed a willingness to testify if cleared by a judge.

Other advisers have counseled the president that it is unwise to replace his chief of staff and create turmoil while Trump is dealing with the multiple brush fires of a congressional impeachment probe.

“Trump is back asking everyone what they think about Mulvaney,” said one senior U.S. official. “He clearly is upset with him. He’s being advised that the last thing he needs is another major personnel move.”

Mulvaney’s relationship with Trump garnered new scrutiny Tuesday when he called off plans to file a lawsuit asking the courts to rule on whether he should comply with a House subpoena to testify in the impeachment inquiry. Instead he announced he would follow the president’s broad directive barring aides from participating in the inquiry.

Some current and former aides have nonetheless chosen to comply with subpoenas from Congress. Others, such as Bolton, have indicated they would look to the courts for guidance on competing demands from two branches of government.

Tuesday’s court filing by Mulvaney came amid growing rancor inside the White House over how to respond to the impeachment investigation. Mulvaney has clashed with White House counsel Pat Cipollone over how to navigate the inquiry, in which public hearings are set to begin Wednesday.

The about-face was also the latest in a series of high-profile course changes by Mulvaney as he comes under fire from Capitol Hill and from present and former colleagues in the White House.

On Monday, Mulvaney’s legal team had notified the court that he planned to file his own lawsuit against the House seeking court guidance on how to respond to a subpoena for his testimony. The lawsuit, his attorney said, would be related to one filed earlier by Bolton’s top deputy, Charles Kupperman.

Mulvaney’s lawyers noted in a court filing Tuesday that “after further consideration,” Mulvaney had decided not to go to court at all. “Rather he will rely on the direction of the President, as supported by an opinion of the Office of Legal Counsel of the U.S. Department of Justice, in not appearing” before the House, Mulvaney’s lawyers said.

Mulvaney’s initial effort to join the Kupperman lawsuit rankled Bolton and Kupperman because they had cited Mulvaney as a critical player in the effort to press the Ukrainian government to pursue investigations helpful to Trump’s domestic political agenda, a move they viewed as improper.

Outside legal experts saw Mulvaney’s move to join the case as an effort to secure some legal cover given he had potential exposure because of his private actions seeking to withhold aid to Ukraine and his conflicting public statements about the motives for that blockade.

The abrupt change in legal strategy confounded national legal experts, as well as senior advisers to the president.

“None of it made any sense to me. What we’re seeing right now is not only disarray but almost jaw-dropping incompetence,” Chris Whipple, who has written a biography on White House chiefs of staff and has interviewed most living ones, said of Mulvaney’s moves.